Giving up Cheese and Cocaine: How Yoga Catalyzed my Letting Go Process. The last time I did cocaine I was 22.

I’d graduated from college that May and had started practicing yoga that June, which meant I had begun the shedding and letting go process that yoga catalyzes.

A local fashion designer had asked me to model in her show. My childhood dreams of being a model were coming into fruition—I was beside myself with joy.

On the night of, I was giddy with anticipation. The champagne (read: sparkling something or other) was flowing. Backstage was aglow with young, beautiful faces. We were makeup-ed, dressed, and we walked. It was short; I was sassy. And then, it was over.

Afterwards, we went to an after party at a local high-end clothing store. The sparkles were wearing off. I had long ago given up drinking to get drunk. And I’ve never been very good at small talk. I like to watch, observe, maybe catch the ear of one person and philosophize about life and its ways, and I like to eat. With the climax of the fashion show over, I realized how ravenously hungry I was. Luckily, they had a spread of cheese and crackers. It was the cheap kind of cheese—artificially colored, over-processed—, glowing like it belonged in Mr. Burns’ house.

Since I hadn’t been drawn into conversation, I let myself be drawn to the nuclear glowing flame and I ate, and ate, and ate some more. It wasn’t good, the cheese, but it satisfied this empty hunger inside of me.

Everyone had their party face on, but the connections weren’t real. They were based on one upping, who was more beautiful, who had it more together, who was drinking what, who was doing which drug, who was fucking who, and which after party or club would we continue this charade at?

To kill the anxiety that swirled around me, swelling my own fidgets and ticks, I ate cheese, so much bad cheese.

After far too long with the cheese platter, my friend who had been in the show with me told me that she was ready to leave.

I drove us to my apartment where we met another friend and sat on the floor of my bedroom, chattering away about love, life, possibility. We were young and idealistic, floating on a cloud of fairy tale dreams. We hadn’t yet found our purpose. With the giddy chatter came the want for drugs.

Though yoga had begun to transform me, I was still drawn toward highs and lows. I brought out a baggy of cocaine, remnants from a night out in a club. Diamonds sparkled in our eyes.

I always loved the ritual that goes into snorting cocaine. The little baggy, the razor, the mirror. It spoke to the OCD I hadn’t yet healed.

I lined it up perfectly; we snorted it, and the talking began. Well, their talking began. I was hit with major gas pains, which sent me running to the bathroom, where I sat, for no less than forty-five minutes, on the toilet. The cheese, was all I could think, the cheese. My body was rejecting the cheese.

Through yoga, I had been realizing that I couldn’t eat cheese any longer, but this was unlike anything I had ever experienced. The snorting of that line sent my body into a full rejection of the cheese.

Cheese was the first food that yoga wanted me to get rid of, but it was my night of snorting cocaine that kicked it out of me. And it was yoga that kicked my need for the highs and lows that cocaine brings.

A regular yoga practice shows you your truth. Any food, relationship, addiction or attitude that inhibits your growth will be highlighted, giving you two options: stop practicing yoga or let that food, person or habit go. It brings you to the center of your core, to the place that sings your truth, and it is from there that the habits you have been holding onto will be released.

When I first started practicing, yoga told me I shouldn’t eat cheese. It screamed at me throughout my practice to stop eating what was very clearly making me sick. It also told me to let go of any habit that ultimately made me feel empty. Cocaine, though it had its highs, ultimately it left me feeling empty.

Much of yoga is about releasing, letting go and shedding until you become the person you are meant to be—a free, beautiful spirit manifesting your light into the world. Often that letting go begins in the yoga room, but it is outside of the room that the actual releasing takes place.

That night, when I snorted my last line and ate my last glowing bite of cheese, a piece of me died and I birthed a new girl into a new world. That’s the beauty of yoga: you start the journey inside of the room, but it doesn’t end there. The journey follows you into your everyday life presenting you with situations that will ultimately remind you to let go of the crap you don’t. And yoga will be there in the morning to guide you to a stronger, cleaner, happier, healthier, more healed you.

With every bad habit we let go of, we make room for new growth, new life. And with every release we become freer and more able to manifest who we are. Hidden underneath that pile of bad cheese and cocaine was a whole mountain of darkness ready to be explored, examined, broken through and, ultimately, let go of.

In the words of The Doors, I had to, “Break on through to the other side.” 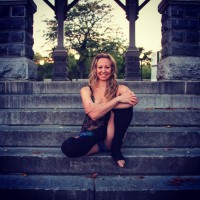