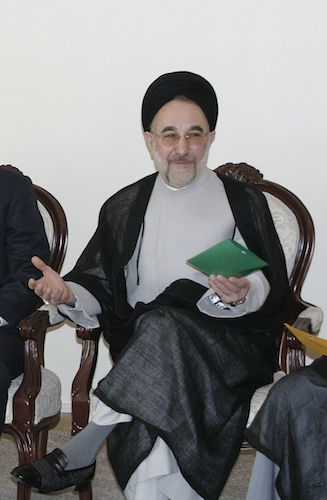 Ordinary Iranians are not talking seriously about attaining nuclear weapons, according to my Iranian friends.

What they want is nuclear power, which they see as a sign of economic development. While environmentalists might scoff at a people risking international isolation to go nuclear, Tehran suffers some of the worst air quality in the world. Nuclear could help clean the air while producing far fewer greenhouse gas emissions. But even if nuclear is dangerous and outmoded, this would not be the first time a people had staked their dignity on a meaningless symbol.

My Iranian friends are smart and sophisticated, much like the Iranian ambassador, who is better educated in both international and American constitutional law than any of the 47 Republican Senators whom he so recently schooled after they attempted to scuttle Obama’s nuclear deal. So when pressed on whether Iran is really seeking nuclear weapons, my friends are quick to concede that no one really knows what the Iranian government actually wants. Mitra Forati, an Iranian-American schooled in counseling, speculates that what Iranians really want is recognition. She suggests that Iranians love their culture more than religion and they want it to be treated with respect. “Religions come and go, the culture remains.” And the Persian culture of Iran is ancient.

Many scholars trace the roots of Judaism back to the much older Persian religion of Zoroastrianism. Both had angry Gods that nobody would want to attain the bomb. The God of the Jews grew up and got reinterpreted, though, while the Iranians found a new God, whose Qur’an constantly references the Jewish prophets. Jews have been an integral part of Persian culture for 2,500 years. My father’s side of the family are Iraqi Jews, who immigrated to Iran after the fall of the Ottoman Empire in the 1920s. That was when the British and French carved up the core of the Middle East into a series of weak and divided states they could rule by proxy. Jews have always moved around a lot, but the Persian Jewish community was the oldest. Yet, when the Shah of Iran fell from power in 1979, and Islamic radicals took 52 American hostages and held them for 444 days, the footloose Jews packed their shoes and moved again.

And so it was that my house came to be filled with a coterie of aunts and uncles and cousins speaking some garbled mix of Farsi, Hebrew, English and French. Apart from the pistachios and Persian carpets little of the culture stuck, though. My family never spoke much about being either Iranian or Jewish. My dad kept his identity pretty quiet, my brother and I concluded God was a hoax, and being Christian meant more gifts for Christmas. The only kid who ever asked me where my dad came from listened thoughtfully and said, “No wonder you’re so weird.”

In the shadow of the hostage crisis, Iranians tended to associate with bearded mullahs and flag burning mobs. It was a collective humiliation for Americans, who seem two generations later still stunned. Americans do not tend to know much about the rest of the world, so few had any idea that the “death to America” chants were partly a response to the U.S. sponsored coup that removed Iran’s first democratically elected Prime Minister in 1953.

The ignorance of history allows us to sustain the illusion that we are somehow fundamentally different. We ignore the shared roots of our religions, ignore how Western imperialism shaped the Middle East, ignore our own mixed identities. While the Jews were supposed to have been an autonomous community living within Iran, it is striking how much the faces of my Iranian friends look like those of my Jewish-Iranian relatives. Paternity studies suggest that the number of children born out of wedlock to cheating mothers and fathers is staggering, hence my own identity might straddle not only the Jewish-Christian, but also the Jewish-Muslim, and even the Arab-Persian divides. But who cares?

All of this might make me sound very interesting, but it is mostly just good storytelling. Most national and ethnic identities are mainly comprised of these sorts of good stories. The stories can bind together a people, but they can also separate us from one another, so it is important we tell the kind that allow us to make peace and love across artificial ethnic divides. There are numerous stories we can tell that will bind together America and Iran, and these reflections open up but a few possibilities.

But it is nevertheless true that Iran’s acquisition of nuclear weapons could set off a nuclear arms race in one of the most volatile regions of the world. If Iran get nukes, so might the Saudis. If the Saudis get nukes, so might the Turks. But Iran did not start the arms race; Israel possesses roughly 200 nuclear warheads and its Prime Minister often speaks of attacking Iran. While Iran has not invaded another country since before the U.S. even existed, Israel has launched four major offensives in just the last decade. While Iran has some of the world’s most stable borders, Israel possesses territory from each of its neighbors and will not even declare its own.

Young Iranians tend to love America, where they often attend college and seek to stay; Israelis can be quite cynical about America, much like their Prime Minister, who lied to Congress about weapons of mass destruction in Iraq, and has been talking about Iran being just on the verge of acquiring nuclear weaponry for almost two decades. Iran can help defeat Isis; Israel can contribute nothing to American military ventures, because their presence splits coalitions. Iran can help to stabilize Iraq; Israel helped destabilize it in the first place, through its lobby which pushed the Iraq War. And yet, somehow the Prime Minister of Israel is doing everything in his power to prevent a nuclear deal that is the only option on the table. It seems it is hard to see the partner you have treated so poorly start talking with someone to whom she might be better suited.