Tossed aside: Why an Older Cat is not the same as a Lamp that is Broken. 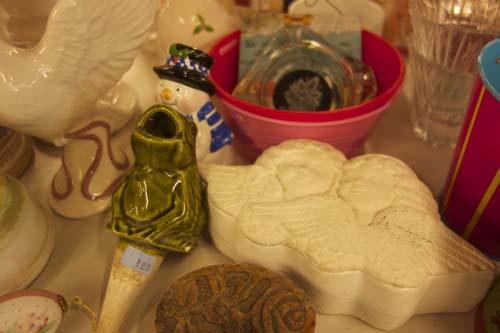 The tossed aside sculpture made by Michael B. made me sad.

Here it was, in the thrift store, sitting alongside the 99 cent vases and resin angels. I wonder who Michael B. was—did he sculpt this face sculpture in his beginning pottery class? The eyes and nose were crude…he had a long way to go toward a gallery career.

However, I am guessing from his handwriting that he was in middle school. The scrawling letters gouged into the clay spoke of a young boy making a gift for someone who tossed it. Seen as “stuff,” it went into the giveaway pile. My “stuff” surrounds me; it helps to define my space. However, there is a melancholy that sets in when I stroll amidst the forgotten items at the thrift store.

It sounds ridiculous, doesn’t it? To think about all of the soups made in the heavily used soup pan. The nightlight shaped like a giraffe surely kept a baby from crying in the night.

Sometimes I will create little narratives in my head about the sepia toned picture people. The one dollar box of old pictures is the flame to my scavenging moth. What fun to sort through these old pictures. Women wore tight cinched full skirts and men smoked and wore suits. Smiles and grimaces and shy grins leap out at me as I try to flip through them quickly so the lady next to me can have a turn.

Browsing through a thrift store is like surreptitiously opening a cupboard at the house of an acquaintance. We can put on a new lens to view a world other than our own; where people may have had green towels with blue stripes and a plastic Jesus statue.

I need to save that old soup pan and make some vegetable soup with gluten free pasta. Those towels may work in the corner bathroom. I want these items, to own their back stories and make Michael B. proud in some cosmic way; his sculpture can hang in my office. This isn’t realistic; I need as much to add to the thrift store as buy from it.

What is this—to be tossed aside? The veterinary staff told me that I “would be toast” if I worked there. These people know me well, as I bring my tribe of cats, dog and birds in to see them at various points of the year. We are kindred spirits, this staff and I. In addition to ringing me up for Cleo’s fluids or Linus’ test, we talk.

They tell me about the countless number of puppies and kittens that are left at the doorstep in the morning. I hear about the reticent owner who asks them if Fluffy will be okay once he is surrendered? My head wants to to pop off and say, “Can I tell you of euthanization rates in this state?” I cannot be gentle with people who surrender their furry family members. That is how I see it; don’t talk to me of extenuating circumstances or rationale. Animals are family members.

What are the parallels between tossed aside thrift store items and tossed aside animals? Not much. One group is made up of sentient beings, the other made up of inanimate objects that were once woven into everyday human routine. The fact that discarded items and animals are mentioned in the same breath is the point. Used colanders and umpteen photos of Yosemite from a bad angle have a shelf life in terms of usage. Even if their backstory intrigues me. A pet cannot be viewed in the same way—merely to be tossed away when “used up” (read: no longer a kitten or puppy).  It is difficult to understand that the cat up for adoption is “not the right color” or the dog has legs that seem gangly.

How noble an effort it would be if, in addition to fixing a broken heart every now and then, we fix the chip on the bowl. We adopt the bouncy kitten with one eye. Bravo—it’s a feel good moment—the trick is making it last. Positivity begets action and can be an impetus for talking to a friend before she surrenders her cat because it scratched her once.

Explain to me the disposable mindset of people who see animals as anything but family members. Am I wrong to say I don’t want to know these people? This is one judgment I can’t shake. If spun in a positive way, I assume that this can be viewed as sensitivity on steroids. Perhaps Michael B. intrinsically has this sensitive nature. However, please don’t tell him that his artwork was tossed away. 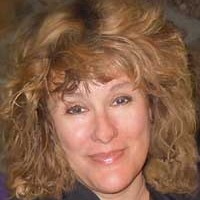