“Are you beach body ready?”: Health Company’s London Ads cause an Outcry. 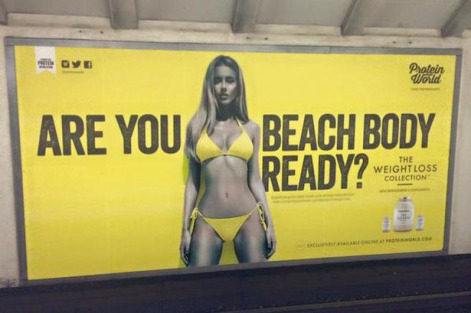 “Are you beach body ready?”

This is the question asked by the advertisement in the London Underground which has resulted in repeated (and creative) vandalism of the posters themselves, a Twitter storm, a 50,000 signature strong petition to remove them and a protest planned in Hyde Park this weekend.

But I first heard about all of this through a friend on Facebook who shared an article from the Guardian on the whole fiasco and titled it: “Why is there a row over this poster??? Nice looking model, perfect body!!”

I spent the next hour reading everything else I could find on this now infamous advert. Details of the vicious Twitter wars going on between the company in question, Protein World and individuals who objected, claims of a bomb threat being made to the company’s headquarters, pictures of the adverts after ‘improvement’ by members of the public all show the visceral outrage sparked by these ads.

Clearly a nerve has been touched and it’s one that has been exposed more and more frequently of late: the questions of body image and body shaming.

In the end I was left thinking about my friend’s comment. What is it exactly about this ad that has caused such a backlash here? And there’s the obvious stuff, sure: sexist advertising techniques, the fat vs. skinny shaming debacle, women reclaiming ownership of our bodies from the media, etc.

But I liked the way one writer for the Guardian put it best:

“Is your body, the incredibly complex, awe-inspiring physical vessel that carts around your brain, and equipment for breathing, excreting, digesting, and so much more, and is perhaps even growing new life within it, currently at a level of slimness determined as attractive according to western notions of female beauty such that it can be exposed to fellow human beings on the beach without causing them unnecessary trauma?”

For me, the problem is not so much with the question the ad asks, or the image (a slim blonde model in a bikini), or even the products themselves (protein shake meal replacements) but the combination of the three.

By asking whether you are beach body ready and using the example of the typical nice looking model with a perfect body, they’re saying that this body is the definition of the kind of body which is ready to head to the beach in a bikini or any other swimwear of choice. And if your body doesn’t conform, and/or reading/seeing this makes you feel that you’d rather crawl into a hole than strip off in the sunshine, then here are some products for that particular problem, which they have exacerbated by pointing it out so unavoidably while you jostle for your train on a crowded platform in an already physically uncomfortable situation (trust me, I lived in London for six years.)

I can see why a bunch of people are getting a bit more than annoyed at having to put up with these billboards shouting this message at them during their daily commute. Bomb threats are taking it a bit far though. Attacking the model in the picture is too. She seems to be a beautiful, healthy woman. But does this mean all beautiful, healthy women fit this profile? I think not.

Look, I’m a health nut. I’m all for what Protein World say is behind this campaign: getting healthier, fitter and stronger. I believe your body is your temple and you should treat it with care and respect. However this does not mean that I believe Protein World when they say this is the spirit of their campaign. Let’s be honest, the spirit of their campaign is cash, much like all advertising campaigns. 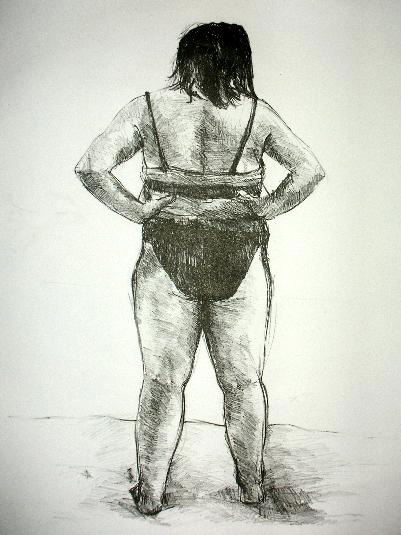 And there is another random reason I think this ad campaign is rubbish. I was an artist in a former life. Well, I still am, I guess, I just write more at the moment. I always loved drawing and painting nudes but I found it a bit awkward getting people to take their clothes off for me. I got some good advice one day: go to the beach. There I found my idea of heaven—a whole selection of semi-naked people to draw and study and delight in. And it is the largest, most luscious and quirkiest beach bodies that I love the most. These people make the best models for a artist like me. I still love taking my sketch-book and camera to the beach and I would be devastated if everyone suddenly decided to follow Protein World’s advice and get ‘beach body ready’. I’d lose my perfect models. The beach would be a sad and boring place to be if we all looked the same.

So, you see, beauty really is in the eye of the beholder and what is wrong with this picture is that we shouldn’t have to put up with “health” companies who are selling us something defining what this beauty should look like. Beauty, much like health, is a far bigger picture.

I, for one, agree that we should turn our backs on this kind of advertising and make a noise while doing so.

Photo: Labeled as Google image free to reuse, Original illustration by the author