I Fell Hard for Hafiz. 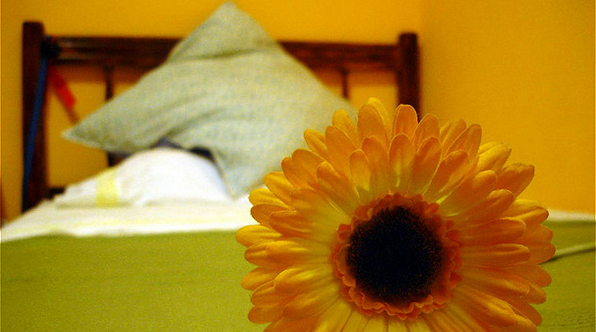 I went to bed with a man much older than me.

I don’t even want to confess our age difference but I will because I have never felt so electric, sensual and on fire. The memory makes my bottom lip swell and my fingertips tingle.

You should know him too.

It was springtime and I was visiting Martha’s Vineyard, staying at a beautiful cottage where the bed had chocolates and a towel left out and waiting for me.

I had been intended, invited and it was lovely to be such a welcomed guest.

He was not a dazzling looker and I missed him at first glance. It wasn’t instant attraction as much as curiosity. He sat at an angle crumpled and faded but still appealing.

I had to have a crack at that spine and let my fingers open him.

He didn’t say a word, not out loud, but quietly waited.

It didn’t even seem too forward for me to move in close, to grab, finger, graze and devour him as he sat between the covers on the bed to be mine.

I had the feeling that there had been lots of others. He knew how to simply be patient and that I’d eventually slow down, tune in and notice him.

Out
of a great need
we are holding hands
and climbing
not loving is a letting go.
Listen,
the terrain around here
is far too dangerous
for that.

That was the first kiss of ink he marked me with.

In just a few lines Hafiz had courted and commanded my attention and devotion.

I had not fallen so hard or instantly since age fourteen when my heart was held hostage by Cat Stevens. It was 1980 and I’d place him down on a turntable, move the needle and rest my head on a speaker as large as a laundry basket so I could hear and feel his lyrics, his music.

All the times that I cried, keeping all the things I knew inside, it’s hard, but it’s harder to ignore it.

How could some adult dude I never met know the hard, complicated and precise feelings of in development me?I didn’t get it but it was undeniable. I knew jack about him but still it felt intimate, personal and pulsating.

Decades later I felt the same again with Hafiz so I knew it would be lasting, deep and forever.

Not just anyone can make me feel soothed, nurtured and tended to.

Not everyone is disarming, charming and mysterious without being secretive or sneaky.

He made me feel real, seen and revealed – to myself. And I had to know more of him.

I could see evidence of other hands on the pages leaving soil marks, creases and folded spots, knowing his words had transformed others as they did me.

He made no promises to be exclusive.

But he was necessary, urgent and like hunks of bread remembered and found before starvation makes one too weak to think or move.

I pulled him close to my chest, scribbled line after line, passage after passage into my journal. The desire to read more was fought only by the urge to call every person I love and say, “You have to hear-feel-see and know this now!”

But I kept him to myself at first. His words were my discovery, the secret ingredients to something I had forgotten was needing to cook in me and he was a balm for all my aches because he had lived so long there was nothing unfamiliar to him.

I love how poetry can climb behind cells, inhabit the underside of skin and rest in the space between eye lashes and balls.

The heart is right to cry
even when the smallest
drop of light,
of love
is taken away.
Perhaps you may kick,
moan, scream
in a dignified silence,
But you are so right
to do so in any fashion
until God returns
to your life.

Poetry holds the place where resolution is not possible or maybe even necessary—ever. It reminds me that all is well and can feel like hell at the same time. Day to day me rages against uncertainty and mystery and the timelessness of grief. But the lyrical part of my being that poetry wakes up from napping is comfortable with complexity.

How often I’ve tried to go and stay, dive in to water without getting wet and keep my heart open and closed at the same time.

But I can’t jump from a plane with the parachute already open. Begging the bottom to be merciful, if I hit, is sometimes the only option while taking in the vast expanse a big risking leap allows. That’s not even tragic—just life—and sometimes magic or at least the perfect place for transformation.

When you can endure
when
the words stop
and you can endure
the silence
that reveals your heart’s
pain
of emptiness
or that great wrenching,
sweet longing.
That is the time to try and
listen
to what the Beloved’s
eyes
most want
to say.

When the words of Hafiz found me, they became a soft blanket on my shredded, raw heart, reminding me that my soul still had embers glowing that could never be extinguished.

I’ve never met the Persian poet born in Iran in the 14th century yet we are intimate and connected in the highest form of sharing.

A guy and a girl in bed, naked, on opposite ends of the pen and page, divided by centuries, religions and continents but still able to come together.

That love of mine, Hafiz wrote:

I wish
I could show you
when you are lonely
or in darkness,
the astonishing light
of your own being.

So to my dearest Hafiz,

Can you feel my words travel back through the waves of time? If you can, please know, you got your wish. I got you—mere centuries later. Thank you for finding me after all this time. I know there are others, too, but I love you.

Hafiz poems and excerpts are from Daniel Ladinsky’s Penguin publications The Gift, Poems by Hafiz © copyright 1999, and I Heard God Laughing, Poems of Hope and Joy © copyright 1996 & 2006. Reprinted by permission of the author.