Becoming a Bodhisattva: The Supreme Thought. At the core of the Mahayana Buddhist teachings is the crown jewel of bodhichitta.

This is the supreme thought, the highest possible concept that the mind can generate. Bodhichitta is the intention to bring all sentient beings to enlightenment. The person who has this thought of becoming awake in order to liberate others is a bodhisattva, who could be considered to be the supremely thoughtful one.

At the conclusion of many lifetimes, a being may generate the supreme intention to benefit others. That is the first thought of a bodhisattva. It is also the last thought—the final result of a long journey through every conceivable thought. At that point, there are no other thoughts, for there is no “I” in other. This supreme thought is pure: there are no contorted logics about why it is good to think about others. It is how the bodhisattva really feels. Finally, this thought has beauty and balance because it naturally benefits the bodhisattva and everyone else.

The difference between our everyday thoughts and the bodhisattva’s thought is that most of us wake up with the thought of self—“What can I do to be happy?” Like the supreme thought of benefiting others, this thought is first, it is final, and it has its own kind of beauty, an innate symmetry in accord with its own needs. But with this ordinary thought, whether one engages in worldly or spiritual activities, they are all based upon the principle of self.

Just as that thought arises so easily and naturally for ordinary beings, the bodhisattva arouses a mind of bodhichitta with, “May others be happy” as the first thought. In that moment, the concept of self is completely evaporated. The bodhisattva’s consciousness and the intention to benefit others emerge together spontaneously.

The transition between ordinary thoughts and bodhichitta happens as thoughts of others’ benefit beginning to arise naturally and spontaneously. This is the pivotal step on the Mahayana path, for in it is the seed of full awakenment. It is the apex of concept and the lowest point of wisdom. It can be likened to dawn, which is both the brightest part of the night and the dimmest part of the day. In that light, wisdom is always there, and darkness is only a temporary state.

Bodhichitta is known as the crown jewel of all the mind’s concepts, representing power and authority. Random thoughts of others amidst those of self-concern are like the settings on the crown. It is called “wish-fulfilling” because when this thought of others is the first thought, always dawning, the natural result is the fulfillment of our own and others’ wishes.

Conceiving of the intention to achieve enlightenment in order to benefit others is a sign of maturity. It means that after spending eons at coarse and obscured levels of consciousness, considering only how to benefit the self, the bodhisattva has experienced a pivotal understanding: he or she sees that the self is a fabrication, simply a thought that has been animated by the mind, like a cartoon. Pondering this, the bodhisattva concludes that thinking about the self only causes further suffering. It is the most confused, ignorant and untrue thought possible—and the one on which many people base their entire lives.

The bodhisattva understands that by gathering up the various attributes of consciousness and body, the mind has created a bundle known as a “self.” Rather than feel the free-flowing quality of perceptions and experiences, the mind has consolidated them into one bale of hay—all because it could not handle interdependence. From that moment onward, it has based all its experiences on this identity called “me.” Similarly, it regards others not as interdependent, but as separate selves too.

Because forcing the disparate elements of mind and body into a single “me” is unnatural, trying to hold the concept together always causes tension, and the natural outcome of tension is further tension. When others threaten this tension called “me,” the concept becomes angry. When others cater to and flatter this concept, it wants to draw in the praise, and desire is added to the mix. When others’ self-fabrications have more finesse, this self cannot handle it, and becomes envious.

Thus, the self experiences a perpetual universe of push and pull. To continue its storyline, it needs to fabricate a universe where it can act out its fantasy, which results in the process of birth, aging, and death. However, no matter what universe it fabricates, the concept of self is always in pain.

The thought of self is considered to be intelligence that cannot see things properly. We are in the dark, trying to feel our way. We might mistake a blanket for a dog, or grab a chair and think it is a table. Therefore, bodhichitta is considered to be the dawning of wisdom. When it is born, it continues; it is not a temporary state. When the supreme mind arises, it is joyful. Bodhisattvas’ minds are less coarse because they are more in line with the truth.

Becoming One with Dharma. {A Teaching by Sakyong Mipham Rinpoche} 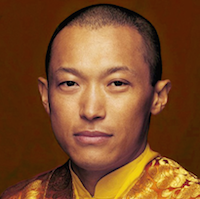 The Sakyong, literally translated as “earth protector,” is a dharma king and lineage holder of the Shambhala lineage, guiding thousands of students around the world in the… Read full bio