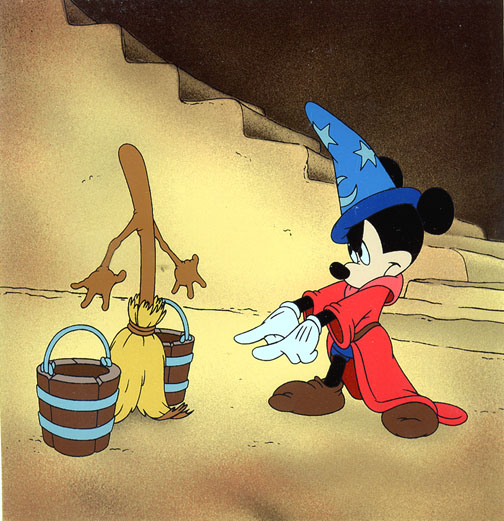 In the 1938 classic, The Sorcerer’s Apprentice, Mickey Mouse plays apprentice to a great wizard.

Attempting to imitate the sorcery of his master, Mickey rouses a broom to life and rests as it performs his chores. As the broom fetches water from a well and drains it into a stone basin in the wizard’s laboratory, Mickey falls asleep and dreams that he himself is a great wizard, commanding the waves below and the dome of stars above.

He awakens to a basin near full, yet the broom carries on without cease. After repeatedly endeavoring to immobilize the broom, Mickey panics, takes an axe, and smashes the broom to pieces. Yet each piece stirs to life, becoming scores of new brooms, and all of the brooms together resume their task, until from each of their labors they raise to life a swelling flood.

Human innovations have this tendency to overpower their makers. At times, this is dramatic, say, the weapons of war or revolutions gone astray. But more often than not technology overwhelms us in mundane ways. We call forth the powers of our sorcery, enlist the facilities of nature in the service of invention, adapt ourselves to our creations, and somehow believe that we are still in charge. As the systems theorist Francisco Varela has noted, “We lay down a path in walking.” We construct worlds for ourselves that we then inhabit, as if those worlds had arisen organically, free of human artifice. We do this with technologies and businesses and political systems, molding ourselves to the furniture of a human-built world.

It is a handy trick that appears intrinsic to the human mind. Born into indeterminate worlds, subject to the powers of creation and destruction, humans have evolved to be a paragon of adaptation. But sometimes we find ourselves unable to adapt to our own creations, and they sweep us away with their awesome force. It is not just one or another innovation that overwhelms, for one technology calls forth another and another, until a system of technologies lords over us like Mickey’s army of brooms. The automobile brought forth the interstate highways; the highways brought about the need for big-box stores; and the cars, the highways and the big- box stores were custom fitted to life in suburbia, where atomized individuals came to devote an increasing portion of their spare time to television viewing.

The pattern is typical. We mold our movements to those of the machine, cramp our bodies and minds into school desks and classrooms, pace our synapses to those of the computer. We morph into servants of our own inventions, subjects to an army of our own creation. And it is not just individuals who are so regimented. The whole of our worlds are brought into line.

Technology is central to any mode of production, as Karl Marx would have it. “The hand-mill gives you society with the feudal lord, the steam-mill society with the industrial capitalist.” Technology shapes the possibilities and limitations of productive capacities. And the organization of the productive process circumscribes the nature of job roles within it, whether they are creative or monotonous, self-motivated or collective, physical or intellectual. The productive process orients the way working hours are spent and hence how work shapes the mind and body. The scoliosis of primitive farm laborers, the carpel tunnel syndrome of office workers, and the stubby fingers of early factory workers are illustrative of the potential malformations.

This shaping of the self through work goes much deeper as well, molding personas and perceptions and the very way we seek release from tension. Neural networks are wired through work, muscle fibers reinforced, bones aligned. And insofar as the educational system prepares people for work, it conditions when we speak, when we listen, how we sit, and what we know. In a society of factories, students sit in rows, respond to bells, and conform to expectations; in a post-industrial school they are taught to play nice, to be creative, and to think for themselves. For Marx, it is not the university that shapes the mind but rather the work that will later be required of students that determines the curriculum of universities. In this way, economic activity conditions our perceptions, shapes our values, and constrains our prospects. In short, it makes us who we are.

Human consciousness is now undergoing a tectonic shift. Information technologies transform our sense of space and time, and this changes the peoples and places with which we most identify. Since information technologies are globally interconnected, using them brings global consciousness to maturity. It does this by uprooting us from our own locales while exposing us to the products, the news, and the creative productions of the world.

And it is not just individuals whose identities are transformed. The continual advance of information technologies deepens global production chains, strengthens business networks, and shores up financial markets. It makes it easier to organize communications amongst world leaders and their subordinates. And it strengthens global protest movements. The ability to think globally is now critical to financial, to political, and to social competence, for the arsenal of technologies now sweeping us into the future is globally integrated. The emerging system of production is reorganizing lives across the globe. The way we think, the things we value, the people with whom we identify, and the ways we do business are all being globalized.

Humanity is now deluged with information and racing to keep up with the system of global production. Like Mickey Mouse, we are struggling to keep up with nightmares that have sprung from our own cleverness. But in the process, we are learning to see further and deeper into the nature of things. Man is the ape with the furrowed brow that somehow seems to muddle through. The forces we have conjured up through information society are like a Leviathan, a juggernaut threatening everything in its path. But the same forces that threaten our destruction are also making us globally conscious, and through global consciousness we are learning to cooperate. In the Sorcerer’s Apprentice, Mickey was eventually let off the hook, for the wizard stepped in and laid the brooms to rest. Perhaps we will be so lucky.

The above is excerpted from my book, Convergence: The Globalization of Mind. If you liked it, please friend me on Facebook and join the conversation at my new page, Global Minds.

The Internet Revolution You Missed.