How I Found My Inner Compass. I tend to get lost.

Every time I explore a new place, I tack on at least an hour for delays. Put me on Muni and I’ll hop off at the wrong stop. Give me keys to a Vespa in Chiang Mai and I’ll lose my friend within three minutes, crashing into a stranger in 30. Search for me in Shanghai and I’ll follow the largest crowd in hopes they’re going to the same place I am. They’re not.

So when I set out for a solo road trip from Boulder, Colorado to Moab, Utah, I expected delays. Indeed, I wandered off the Flat Iron trail like a starry-eyed child only to find myself on a steep hill of gravel with no sign of previous footprints. After retracing my steps, I discovered the clearly marked sign—the post I brushed off as an aid for novice hikers.

The next day I reached Estes Park. My chest fizzled with excitement, as I scanned the cascading Rockies. A silver-haired woman pointed me towards a red curb, where I could catch the hiker’s bus. Swinging the doors open, I smiled at my luck: an empty trolley ready to roll. As I hopped up the stairs, I noticed a sidewalk sign in my peripherals—small type detailing the route. I ignored it.

Thirty minutes later I found myself stranded an hour away from my intended trailhead.

That night, in my hotel room, I recalled the moment right before I got lost. I saw myself at the information counter, anxious, trying to ignore the large man shouting questions over my shoulder as the guide explained prospective routes. I saw my straight back and wide eyes mask the fear of hiking so far from San Francisco, struggling to remember whether or not grizzlies roamed the Rockies.

I re-examined the sign outside the trolley—the moment where I could’ve paused, allowed myself to look a little lost and vulnerable before moving on. Instead I blindly boarded the bus. I preferred the comfort of feeling like I knew what I was doing, instead of resembling the young, confused 20-something I feared I was. My intuition whispered to wait a minute, to ask questions, to read the sign, but my fear of being wrong sent me in the opposite direction.

I kept this theory in mind as I hiked Utah’s Arches National Park. As a virgin to the Southwest I was uneasy about the grim ditches my body would hit if I veered off course. My mind scrambled. Would I get cell service when lodged in between boulders? Did I remember to pack that extra oatmeal raisin bar? Could I survive a night in the desert?

I pushed down my hesitations and continued walking through the red, damp earth. I had just passed the paper-thin horizon of Landscape Arch—a semi-circle that was once much thicker, but partially collapsed on a busy day in 1991, disrupting tourist photos with falling rocks.

Grey clouds rumbled above, confirming the day’s forecast of lightening and flash floods. Determined to beat the storm, I shook off the sky’s grumble and trekked along the Devil’s Garden trail. Before long my small frame faced a tower of slanted boulders.

My chest tightened, wondering if I had stumbled onto the wrong path.

I looked down at my map and back up at the angry skies that hovered behind the slick, red rocks. My knees quivered. I nudged my boot forward, looking for a place to grab. My stomach curdled. I slid my hands across the top, failing to find any grooves. The mother in me chimed off, “Turn back. It could start raining. You’ll break your leg. No one will find you. Do you really want to die alone in a blue poncho?”

I wiped my clammy hands onto my pants and slid down the first rock, preparing my defeated self for the senior citizen route mapped out on the brochure. As I took a deep breath, a distinct sensation bubbled throughout my chest. My mind flashed to the other side of the slope.

I tightened my pack, climbed up the slippery rocks, and slid through large crevasses. I ran across watery ditches and stopped at the next fork in the road. When I paused, my insecurities told me to move on. Yet, the longer I pondered the more intense the physical sensations became. I embraced the fear—the vulnerable state of looking lost. I accepted that I didn’t have it all together. I started paying attention to the rumble in my gut, to the chill against my cheek—intuitive signals that were trying to guide me through a path much larger than this trail in Devil’s Garden.

The thunder roared as I reached the stunning valley views of Partition Arch. I sat against a warm rock and scanned my map of former life choices. I pinpointed moments where intuition emerged and the exact second I ignored it. The nearly 100 wrong turns, where I made the easy right. The half dozen regrettable kisses I’ve tried to forget—acts that kept me running in an emotionally distant circle.

I had practiced snubbing my vulnerability like an open sore I refused to feel.

It became clear my habit of getting lost stemmed from something deeper than identifying east from west. I was unwilling to sit with the discomfort of not knowing, to sit still long enough for my intuition to chime in, or to take the tough path when the bulk of me preferred the easy way out.

Since my days in Moab I have started paying attention—not just to external road signs, but to the signals within. My body became a walking compass both on the trail and in my personal life. The tightness in my chest told me to speak up. The knots in my stomach reminded me of familiar paths—roads that no longer served me. My burning throat revealed the need to take better care of my body and my soul—to step away from the spaces and faces that kept me numb through long-time vices.

I’ve learned to trust in myself—in the intuitive knowing that’s always there, waiting to be heard.

How to Tell the Difference Between Fear and Intuition 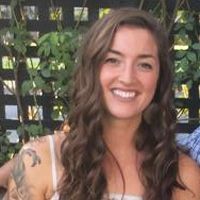