Life Taught Me to be Guided by Intuition. I can tell you the exact moment I had my first intuitive experience.

In 1999, I was nearing the end of my eighteenth year, lying in bed desperately trying to catch sleep for what would be my last night under my parents’ roof.

The next day, I was supposed to put all of my worldly belongings into my boyfriend’s Mustang and begin my life as a grown up. Even though my plan was mere hours from fruition, I’m sure my mother still thought (and hoped) that I wouldn’t go through with it.

In fact, it was partly because of that challenge that I felt compelled to prove my independence even more.

I was registered for my first year of university. I had a job in retail. I had a boyfriend who I had been with for one whole year and he swore I was his one and only forever.

What could go wrong?

As I stared at the ceiling, I asked myself if I was doing the right thing. I was surprised to hear an answer. This voice from within said,

The next day, we moved into our first apartment.

Within six months, I was laid off after the Christmas rush; my boyfriend was cheating on me; I became pregnant with my son; I dropped out of university and the apartment that I had been so excited to make my first adult home was infested with silverfish.

So the voice—that voice that spoke to me on that pivotal night—that was my intuition, right?

For years, I thought it was. I thought if I had just listened to it, everything would have gone according to plan. Because I had a plan—a great plan.

It went something like this: teaching degree, travel, dream job, Mr. Right, marriage, house, rescue dog, babies (all by age 30, of course), at which point I could kick back and live happily ever after.

I felt I had ruined it all by ignoring that important message.

I would go on for a long time believing that I was living a lesser life than I had planned; that I was just making the best with the results of my poor decisions; that I was a shame to my family and undeserving of my role as a mother (choosing to be single by the time my baby was 6 months old).

Over the next many years, I persevered and salvaged what I considered a pretty respectable Plan B.

I returned to school to become a massage therapist, I met a great guy, we added a daughter to our family, celebrated with a surprise wedding, and finally, we reached the last item on my “Plan B to-do list”—we purchased our first house.

I was overjoyed…and then I crashed. Why couldn’t I relax and enjoy the fruits of my labour?

Through the magic of yoga and meditative practice, it became clear.

I was still trapped in the belief that I was living my secondary life in a shadow of shame, like there was some parallel universe where the “good and right Alicia” decided not to move out that summer of ’99 and subsequently, Plan A happened and she was living a perfect existence.

And then, the powerful realization that changed my perspective:

That voice was not my intuition.

That voice was the negative inner narrative that can so seductively suck you in. It tells you you’re not good enough or strong enough and you’re better off playing it safe, doing as you’ve been told or taught and that risk equals certain failure.

My intuition was there that night, make no mistake.

It was deeper and quieter than that voice. It was the knowing.

The same knowing I had when I kept my baby despite being told that he would be better off with more conventional parents.

The same knowing that I had when I met my husband and all other romantic potentials became obsolete.

The same knowing I had when I decided to enroll in massage therapy school without ever having had a single massage myself.

And the knowing I had when we walked through our first house and I told the realtor it was the one.

In fact, all of my scary, seemingly spontaneous decisions over the last dozen or so years, albeit many of them tumultuous, eventually brought me amazing experiences that I never could have predicted.

I’m in the tenth year of a deeply fulfilling career. I have two terrific children. I’ve got a great partner who has been on a 12 year roller coaster with me. I’ve traveled a little, met some outstanding life teachers and found a joyous life entrenched in health and wellness.

Realizing that I’ve been intuitive my whole life was a very powerful revelation because all at once, it allowed me to let go of Plan A because Plan A never actually existed—it was never a possibility.

I’ve been living the original plan. The one that I wasn’t in control of, allowing myself to be guided through it. I was absolutely supposed to make that terrifying move all those years ago, I’ve never been more positive about anything.

Through the events that break you down and force you to examine each part as you rebuild yourself?

I would argue no.

So now, I pay extra attention to the knowing.

I listen, not to the voice that likes to try to dampen my self-esteem or even the one that feeds my ego, but to the quiet knowing.

The feeling I get when I meet someone who I feel love for and I don’t know why.

The feeling I get when I want to smile and I don’t know what for.

The feeling I get when I can’t stop thinking about that person I haven’t seen for 10 years or that course I have been wanting to take since graduation or that hobby I want to learn even though I’m not sure I’ll be any good at it.

I surrender to the “not knowing why” and trust in simply “the knowing.”

I pay attention to the stranger I feel love for and then they turn into this beautiful bond that teaches me great life lessons.

I follow the thing that makes me want to smile and a spectacular experience presents itself.

I text the person who is on my mind and renew a faded connection.

I register for the course and find new love for my job.

I paint a canvas without worrying if I’m ever going to be any good at it and what’s left is the joy of the action.

In this, I have found a freedom and deep happiness that I never imagined I could have because I’ve released myself from judgement and replaced it with compassion and faith that everything has happened exactly the way it was supposed to happen—that maybe there is a greater force at work and it’s okay to let it do its job.

With light, love and deep gratitude, thank you for sharing with me.

…and in case you were wondering, I eventually found my rescue dog from Plan A, too. 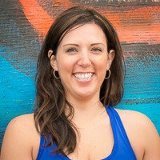