What I Wish I’d Known when I Became a Mom. 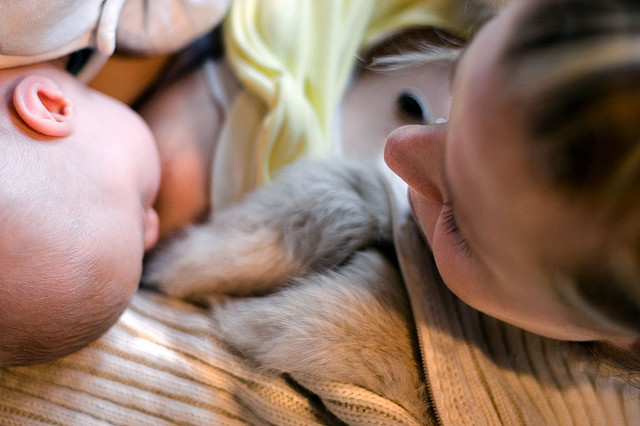 How I felt when I became a new mom defied my expectations, but not in the way you might think.

My storyline didn’t follow the fairytale of fancy-free days full of love, warmth and happiness.

Instead, I found motherhood to be one of the loneliest, most difficult occupations I ever took on. To be completely honest, I hated this period of my life.

Nobody told me what to expect. No book prepared me for what was to come. No woman in my life was forthcoming about her true-life experience as a new mother. And because of that, I was ill prepared.

I remember being shocked about my lack of knowledge from the first hours after my son’s birth. I had no idea, despite how commonsensical it sounds now, that I would bleed for the next 4 weeks. No doctor or fellow mom told me that I would have to wear super-sized maxi pad underwear and spritz witch hazel on my lady business, all while anticipating my next sitz bath. I didn’t know that, if I asked for my son to sleep in the hospital nursery for a few hours during the night, that it meant they would feed him formula instead of letting him nurse.

But it wasn’t until I got home from the hospital that I was truly overcome by the responsibilities it took to care for a newborn. I foolishly thought that if I ensured that he was fed, dry, clean and getting enough sleep that the rest of his waking hours would be joyful, or at the very least neutral.

And I felt completely alone, completely isolated, trapped in my apartment while my partner was at work. New York City was buzzing around me, but all I could do was look out the window at those lucky people who had a life and think that that will never be me again. Those lucky people, untethered by the needs of another human, walking to the subway, going to museums, movies, meetings, freshly showered, having had a full night’s sleep. I would stand there, wishing for my old life back.

But it arrived soon enough—the day that I had to go back to work, only eight weeks after my son’s birth. I’m not sure which was harder, the first eight weeks or the several months thereafter trying desperately to perform. It amazes me that a government that claims to have family values won’t pay to support a woman to stay home with her child and heal. Instead, the burden is on women to juggle it all—the life we had before the baby and all that comes with being a new mom.

Once I came out of that fog, I started sharing my struggles with other moms. And to my surprise, they had similar stories. How could this be? Why hadn’t other moms shared the dark side of motherhood before? Why is this so taboo?

I could have benefited by hearing their stories, the women in my tribe helping me understand what was to come. As I look back, I wish that that was what my baby shower entailed—not material goods or ridiculous games—but rather a gathering of women who spoke of their personal journey on the path of motherhood.

I wish my doctors—both OB and pediatrician—had educated me on the resources that were available, whether they be postpartum depression support groups, pelvic floor physical therapists (yes, they exist!) or postnatal yoga classes designed to help a woman’s body heal. It’s been seven years since my son’s birth, and I only just learned of this amazing profession called a postpartum doula. Their role is to “mother the mother” in those first several weeks after birth, to take care of the new mom just as any good family member would do. Having lived 400 miles away from my mom and dad, this would have been a resource that could have supported me during those trying months.

What I advocate now is normalizing, without shame, the hurt, frustration, loneliness and resentment that new moms feel. We can’t let our narrative come from pregnancy books, romanticizing what it means to be a mother. It’s not real. We need to exchange the new mother’s mantra of “nobody told me” with “thank god I knew this was coming.”

And we need to care for the mother. Let’s not forget about her as we ohhh and ahhh over her new baby. Instead, let’s lavish her with love, encouragement and resources designed for her needs. When we meet mom where she is, then she will have a better opportunity to thrive and—dare I say—even enjoy those first few months of her precious child’s life.