Who’s Terrorizing Who Now That Cuba is Out of the Club? 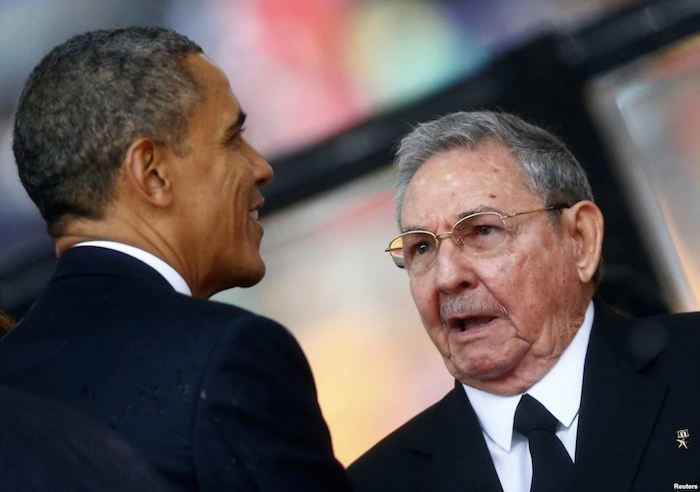 President Obama announced that he will be cancelling Cuba’s membership in the exclusive club of state sponsors of terrorism, where it has held a very ironic membership since 1982, a cordial invitation extended by the Reagan administration.

With Cuba’s departure, only Iran, Syria and Sudan are left to keep the terrorist torch alight. President Obama’s bold steps to normalize diplomatic relations with Cuba, so long overdue and should be applauded. No other president has had the courage or the compassion to end the ideological warfare that has been waged and raged since the Cuban people decided to chart their own destiny in 1959. We can only hope that this is a precursor to lifting the economic embargo on Cuba, which has kept a stranglehold on the country’s economy for the past 54 years.

It is rumored that president Ronald Reagan’s Secretary of State, Alexander Haig, told the president in a private meeting in 1981 “You just give the word, Mr. President and I’ll turn that [email protected]#$%ing island into a parking lot.” This is American, democratic diplomacy at its best. Cuba was added to the list of state sponsors of terror because they were supporting liberation movements in Latin America and Africa, at the time. That may have been a legitimate concern for the United States, in the midst of the Cold War, but just what has the United States been up to for the past 50 years?

“Since the end of the Second World War, the United States of America has…

While some of that information may be subject to interpretation and debate, that is a quite an imperial rap sheet. The United States has been involved in some kind of armed conflict for 93 percent of the time, since gaining independence in 1776.

Included in this dubious list of military actions is, of course, Guantanamo, where the U.S. has been known to torture political prisoners. However, when Cuba (a nation with eleven million people, roughly the size of Pennsylvania) supports oppressed nations, we classify those actions as terrorism, while U.S. interventions are gilded actions to promote freedom and democracy. I wonder how many nations have included the United States on its list of state sponsors of terrorism.

The good news is that we are moving forward. Cuba was recently invited to the VII Summit of the Americas, held last week in Panama. This was Cuba’s first invitation to the Summit, and while the U.S. wanted to take credit for including the island nation, many Latin American leaders noted that Cuba was there because they had insisted that there would not be another summit without their participation.

Cuban president Raúl Castro revisited the history of U.S. interventions in Cuba during his 49 minute speech (he joked that since Cuba had been excluded from the previous six summits, he was allowed six times the suggested time limit of eight minutes) though he concluded by saying that Obama was not to blame for the actions of his predecessors and he referred to his honesty and humility.

For the past 54 years, the United States has been terrified by this tiny nation, not because of its military threat or even its (alleged) communist ideology. What really scares the breath out of the imperialist machinery is Cuba’s unbreakable will.

No country is perfect and the Cuban political model has its flaws, but one thing is undeniable—they have not been bent or broken. Despite multiple attempts (political, economic, military and terroristic) Cuba has never been brought to its knees, they have never looked up at Sam and whispered “Uncle” in sullen defeat. The United States is used to getting its way, of that there is no question. Foreign policy since World War II has been designed to dominate foreign political climates to make sure they are favorable to U.S. economic interests. Cuba has survived under the leadership of Fidel and now Raúl Castro, with defiance, determination and perseverance.

While Cuba undoubtedly supported leftist, revolutionary movements in countries like Nicaragua, Chile, Uruguay, Angola, Ghana, Yemen the Cubans also developed model social programs in health, education and the arts which have been replicated in many countries around the globe. Cuba has also provided significant aid to other countries in Latin America by providing humanitarian aid during natural disasters and times of crisis. Cuba has also been instrumental in mediating peace talks between the Colombian government and paramilitary groups.

Despite the economic embargo, Cuba also developed an alternative economic system that significantly reduced unemployment and created a more equal distribution of resources.

These accomplishments are rarely mentioned in the U.S., where the anti-Castro Cubans would like us to believe that the island is one huge prison where the population lives in miserable conditions of oppression. Former mayor of London Ken Livingstone noted the following:

“What’s amazing here is you’ve got a country that’s suffered an illegal economic blockade by the United States for almost half a century and yet it’s been able to give its people the best standard of health care, brilliant education … to do this in the teeth of an almost economic war is a tribute to Fidel Castro.”

The history between the United States and Cuba is complex, though the time is right for the normalization of political, social and economic relations. We can only hope that president Obama has the personal and political audacity to continue on the path of peace and understanding with Cuba. The embargo has been an act of continual violence against the Cuban people. No president has dared to lift the embargo before now, for fear of a political backlash from the Cuban-American population and its undeniable influence in politics, particularly in the state of Florida, home to 29 electoral votes.

Normalizing diplomatic relations with Cuba is as much about the freedom of the United States as it is about that of Cuba. Aristotle reminds us that “He who has overcome his fears will truly be free.”

Obama to remove Cuba from list of state sponsors of terrorism. The Guardian, April 14 2015.

Cuba’s Defiance Applauded at the Summit of the Americas. Originally published by teleSUR.