Warning: Just a few curse-words ahead!

I have the kind of frame where my bones are so heavy, I actually put on the kind of muscle doing cardio that some people dream of putting on by power-lifting.

Most people look at me and think I might be a football lineman, a wrestler, or maybe a hockey player when they find out I’m an athlete. Guess what? I’m not.

Truly, I’m writing this because it’s something I don’t see written anywhere else (And if it has been, point me to it. I’d love to read it). Friends tell me that I can be a great teacher to my students by example. On my best days, I believe them. And as I’m going through a yoga teacher training, I have the opportunity to reflect on these issues and how I will address them when I’m in front of the room.

I do sports and activities that are mostly filled with thin people, that I’m apparently  not “designed” for. Yet here I am running, years later.

I don’t know how many people have told me that I was going to wreck my joints and break my knees if I tried running more than two miles, yet I ran seven last weekend and I’m still standing. I’m doing my first half marathon this summer. My own mother even thinks that I’m going to die of a heart attack one day from running. People say that big guys can’t be cyclists because we’re not aerodynamic.

I wonder sometimes where this all these assumptions come from. I wonder why people feel so qualified to tell me what I am and what I can do. I do enjoy disproving people sometimes, but I’m not going to lie and pretend it doesn’t hurt when I tell them I finished a 10K and they ask me if I walked. Or I tell them I’m a yogi and they assume I only have a restorative practice.

I do have a restorative practice. It’s great. I need it. But it’s not all I do. Apparently I missed the memo saying that I have to be able to wrap my arms in a full bind to be a real yogi.

So my bird of paradise needs a strap to fly? Does that really make me less than?

I didn’t realize that my worth was determined by my waist size. 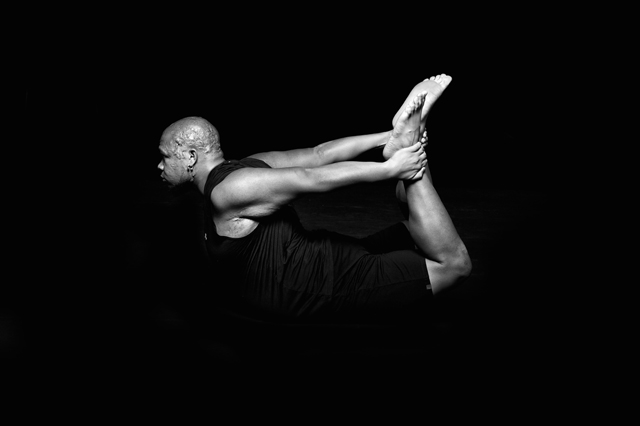 And let’s talk about my waist size. I was a size 44 three years ago. I biked one or two miles each way to work, and thought I was doing great. Truly, I was doing great. But I wasn’t balancing my energy intake and output. Three years and 70 pounds later, I’m a size 38. That’s been static for about two years now. I was actually driving myself crazy about it a few weeks ago. See, my waist has gotten bigger over the winter.

Yeah, I drank some beer and ate some cheese. I also did a fuck-ton of swimming and some of my most strength-based yoga practice ever. And when you strengthen your core, not the muscles on the top (rectus abdominus) but the deeper ones: your transverse abdominus, your waist gets bigger. And if you poke it, my waist is firm, but apparently it’s a belly.

Big can only be bad, in many eyes. And that’s hard pill to swallow.

It’s hard because sometimes I look around the studio and feel less than. I practice hot yoga with a shirt on (sometimes as the only dude with a shirt on) because the great barrel chest I’m told looks amazing today was the chi-chis they picked on and squeezed when I was a kid, and the moobs that an ex-boyfriend told me I’d be hot if I lost. Guess what? I’ve put on a shit-ton of muscle, and my chest only gets bigger.

Every day I feel like I have to prove myself.

I feel like I have to prove that a guy my size can touch his toes or go into backbends. I could drive myself crazy if I let myself believe that I had to get to a certain size to be worthy. But some days, it feels like the message I get.

I disprove stereotypes and assumptions in so many other ways, every day. I show that a black man can be educated. That a gay man can live by his own rules and be an ethical person. I could write a whole other article on that. It’s like shouting at an overwhelming surround sound stereo that never shuts up.

But I say fuck that!

Bodies are bodies. They are vessels for energy, and they have different features. One’s not better than another, truly. Nobody seems to mind my big burly build when it’s time to carry heavy objects. That is, until I need to get into a small space.

And one day, all our bodies will get old, change, and die. Why do we spend so much energy trying to make them what they’re not, instead of helping them be the best they can be? They are the only ones we get.

When I teach yoga, I hope to have the grace I’ve seen in other teachers who look beyond the physical body. Who see a big person and don’t see a project.

These are the teachers who congratulate students on having big biceps if they can’t express a pose “ideally” and offer modifications without making them sound lesser. I hope to give my students of any size a safe place.

I want to remind people that we can dig so much further than skin-deep, in any activity. Truly, I don’t think any form of sweating has to be done only for its own sake.

And whenever I practice, I hope to let my light shine its brightest, without comparison to my neighbours.

This is What a Yogi Looks Like: A Yoga & Body Image Coalition Project.

This is What a Real Yoga Body Looks Like.