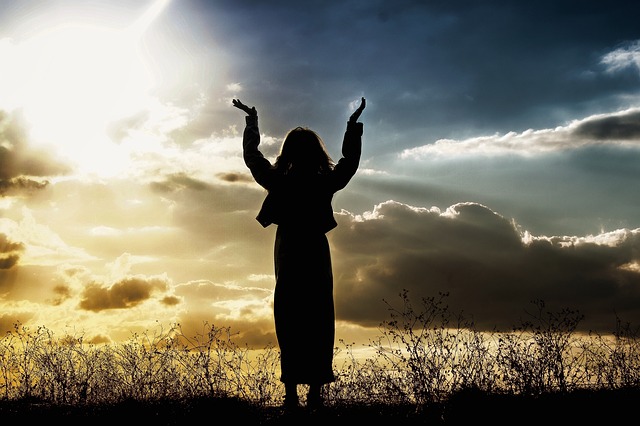 I recently found myself questioning the existence of God.

Through this questioning, I began to realize that I was holding on to concepts from my childhood that I had never subscribed to, but had been forced to learn about.

You see, I attended school at a time when religious studies still formed part of the curriculum. My final years of school also coincided with the final years of Apartheid in South Africa. Needless to say, the teachings were conservative and one-sided; we only received ministers and pastors from the Christian faith, and only those who were reborn.

We’d often be told that unless we were born again, we would go to hell.

When this happened, I’d feel compelled to raise my hand during the Q&A session and ask if this teaching meant that I, as a young girl born to Jewish parents who had committed no “crime” beyond this, would go to hell should I leave school that day and die.

The response usually went along the lines of: not if I answered the call and converted.

If, however, I chose to ignore the truth that I now knew (meaning the only truth), then, yes I could expect it. These were always awkward and uncomfortable discussions. After all, no one really wants to tell a 16-year-old that she is damned, but they felt so strongly that what they said was true they had to.

During this time I also felt the call of “God” for the first time. I attended a talk at a local church being given by an American minister. I was curious to find out if he’d repeat the message I’d heard from local ministers.

Toward the end he had us close our eyes and encouraged those who felt the call to go to the front. I had no intention of going up. I didn’t believe in the teachings. And yet, I found myself, almost against my will, getting up and walking forward.

The pull was so strong, the feeling inside of me so clear, I was literally unable to resist it.

I couldn’t explain my actions. I still can’t, to some extent. I just knew that somewhere inside of me I was being pulled to a life in which I accepted and acknowledged God. I didn’t convert, but something had changed.

I have spent the past two decades deepening my spiritual life, seeking and discovering my path.

When I began to question the existence of God altogether, I realized that, whilst theoretically I had accepted the concept of God as an energy, I hadn’t fully let go of the concept of God as a white man in the sky; a pious being requiring us to behave in certain ways, who both blesses and punishes us. As I said, this is a God I never subscribed to. Yet, deep within, this concept took root—to the extent that my theory and beliefs did not match.

For a long time it didn’t matter. I lived and acted according to what I intuitively felt to be right; God as an energy. A God of love. A God of unity. But, I was being called to go deeper. To look at the beliefs at the core of my being.

To do that, I tossed everything out. I began learning about atheism and agnosticism. I read more about science and quantum mechanics. I began to dig deeper. I stopped speaking about anything spiritual, determined, as it were, to come to an understanding on my own.

Now, my theory and practice are more aligned. I am aware that the teachings from my childhood influence me and they therefore have less power to do so.

There are still things I grapple with.

For example, I’m still unsure about a personal God who is watching over each of us. But I know I believe in a creative force, an evolutionary force that is ever pushing us toward change and transformation. It is the evolutionary impulse of the universe and since we are part of the universe, we can tap in to this force.

I am not saying my beliefs are true. In fact, in some ways I’ve reached a point of peaceful ignorance and curiosity. They do, however, help me to make better sense of the world.

I’ve also come to know that the process was more important than the outcome. It was filled with curiosity and a willingness to begin again. Over and over if needed.

By letting go, I in some ways returned to exactly where I was. This time, though, with a stronger foundation built on a combination of knowledge, experience and intuition.

As Nelson Mandela put it:

“There is nothing like returning to a place that remains unchanged to find the ways in which you yourself have altered.”