Games in the Attic: How a Little Girl Deals with a Broken Heart. 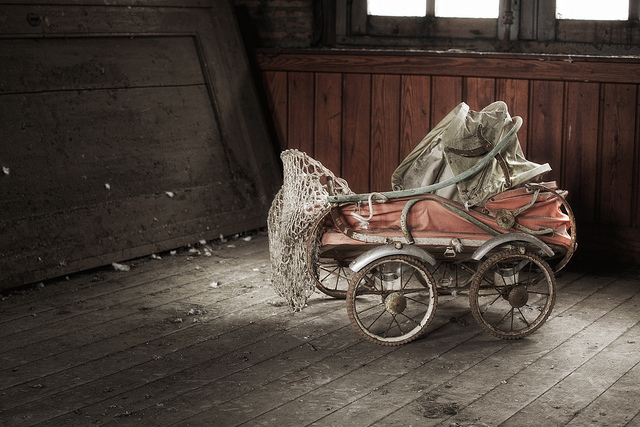 I have never forgotten what I felt the first time I saw my baby brother, Tony, the day my parents brought him home from the hospital.

While he’d survived the spinal meningitis, that had almost killed him, he looked oh, so sick and oh, so frail. What I saw as I stood over his crib looking at him was a shrunken and gray little being, not the cherub I had fallen in love with. Where was my brother? Would he ever come back?

My little girl’s heart broke for him and for what he had been through. I needed to please, please not feel what I was feeling. I needed to get out of that terrible house. I couldn’t stand it there, it hurt too much. But where could I go? I was only 10-years-old.

“You and your sister can come over any time and play house in the attic,” the 80-year-old lady, who lived next door, had said, adding that she would enjoy having us around.

So, that’s where I went, to Moe’s house, where fresh strawberries grew in the back yard, where she and her adult son played the card game Canasta for hours on end and where grey shrunken babies were nowhere to be found.

Except I was too miserable to play house.

The doctors had said that Tony was better, yes, but they didn’t know if he would get entirely better.

He could still be deaf or paralyzed or brain damaged, we would just have to wait and see. My parents treated him like an egg that had been cracked. They were afraid to touch him, afraid to talk to him, afraid to put him to bed at night and afraid that he wouldn’t wake up in the morning.

It was impossible for me to bury myself in such a benign thing as playing house at the neighbor’s when there was such a horrible thing going on at home in my real house.

During the school year, I had read the Diary of Anne Frank and was captivated by the tension, the reality of Nazis, and the impotent fear and terror that Anne and her family suffered in their self-imposed imprisonment. Moe’s attic turned out to be a perfect setting for recreating that drama and pretending that the Nazis were downstairs about to capture Anne.

“Come on. You’ll like it. You can be Anne,” I pressured my sister.

For a while the game was fun for me. But it was a strange kind of fun. A kind of fun that was different and somehow dangerous. There were times that I would take my sister with me to sneak into Moe’s house while she was gone and hide in the attic pretending that every sound we heard was the Nazi’s downstairs. I was pretty sure Moe wouldn’t like it if she found out we were more or less breaking into her house while she wasn’t there.

There were other times that I would convince my sister to let me tie her wrists together and push her under the bed. Other times I would put her in a dark closet, lock the door and just leave her there until I heard her crying and pleading to be let out.

I would lay in bed at night thinking up new ways that I could control or intimidate her.

She finally yelled at me, threatened that she would tell on me and said she didn’t want to play those stupid games anymore. She didn’t like it as much as I did anyway.

While I couldn’t have described it at the time, I had a strange compulsion to play the Anne Frank game. I never did actually hurt my sister, but my senses rose at the thought of making her helpless and of being able to hurt her again, if I wanted to. There was something in me that enjoyed having power over her and enjoyed leaving her helplessly locked in the closet for hours on end until I let her out.

Also, down deep inside I was ashamed of what I was feeling and for thinking up the games in the first place. When my sister looked at me and demanded “How could you do that? How could you leave me locked in there?” I couldn’t look back at her. I couldn’t look her in the eye.

Gradually, my brother’s condition convinced us that he was going to fully recover, the mood in my house lifted and my need to escape dissipated.

I would still bring my sister next door to Moe’s to play, but we didn’t play in the attic anymore. Instead, Moe taught us how to play Canasta and I even started to like it. It was a game in which I could assert myself and feel proud instead of feeling ashamed of being just a little girl who was filled with confusing, pent up emotions and no one to help her understand them or deal with them.

The underlying dynamic of the games in the attic were that my parents, being beside themselves with the horrible specter of what might happen to their only son, could barely contain their own feelings, let alone deal with mine.

They might as well have been telling me straight out to take all my feelings, squish them into a ball and stuff them deep down inside of me. Which is exactly what I did—until I couldn’t contain them anymore and they came out in distorted power plays.

I have wondered what a child of today does under similar circumstances.

All of my story happened in the 1950s. There was no violence on television, there were no mass shootings, there were still P.E. and art classes in school and parents still felt safe to allow their little girls to go to the neighbor’s to “play house.”

Growing up today is not devoid of such things as little brothers getting spinal meningitis, or of mothers and fathers divorcing or of automobile accidents that kill loved ones.

Neither is it devoid of children needing healthy ways to direct their emotional responses to such events. My parents didn’t know—they just didn’t know—how or what to do, other than exactly what they did.

“Children respond to environmental pressures, demands and adversity in varying ways. Some children direct their emotional problems outward into externalizing behaviors. These children express their negative responses to their life experiences by embarking on negative, often destructive action within or against the social and physical environment.”

How I almost Killed My Brother.