I Told myself Never to Trust my Mother. 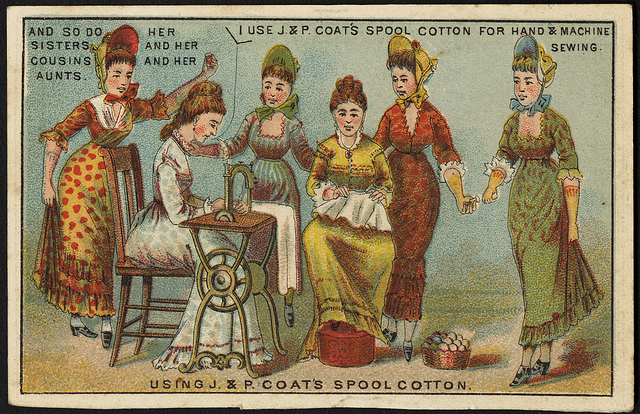 “I’m not upset that you lied to me, I’m upset that from now on I can’t believe you.” ~ Friedrich Nietzsche

I can still see my mother’s hands as she pressed and guided fabric under the foot of her sewing machine.

She did her sewing in a faded white room that had been added onto the back of the house.

That room was a big magic sewing box. But the magic really came from my mother’s hands, the hands I watched from my little girl height, eye level with the machine.

I remember the women who would come and stand in my mother’s sewing room while she measured them and made notes on a yellow pad in her large flowing handwriting. She’d have a tape measure around her neck and pins in her teeth and would talk with her words pushed through the pins.

The women would stand on a little platform while my mother knelt down on one knee and went around the platform, talking with her pins-in-the-teeth voice as she measured and basted their hems.

When the women came, my mother seemed to get smaller. She’d tell me to be real good and real quiet because Mrs. So-and-So was a very important person who brought her lots of customers.

It scared me when my mother told me to be real good. I’d do my own kind of shrinking down on one knee back into the corner, terrified that if I did something wrong I would be bustled back again to the orphanage and left there for another two years until my father could come to get me.

My mother sewed for pale, skinny women with long white faces and dark shiny hair done up in smooth rolls on the tops of their heads. They wore lots of perfume and they flashed and tinkled with bracelets and earrings. To me, they weren’t not nice, but they weren’t nice either. I was a little afraid of them when they were there and a lot afraid of them for my mother. It seemed to me that they had a power over her that could make her crumble down to the floor right off that carefully planted knee.

I remember one time my mother took me to a department store whose name she spoke barely above a whisper.

“Saks Fifth Avenue,” she breathed. We were going there to return Mrs. Moskowitz’s dress for her.

“But why’d Mrs. Moskowitz buy a dress she didn’t want?” I asked.

“Oh, it’s not that she didn’t want it. She wanted it all right. She just wanted me to copy it and make it for her at half the price.”

I felt ashamed when I heard my mother lying to the sales clerk about how the dress just didn’t fit. I could feel that we didn’t belong at Saks Fifth Avenue, and I felt that the clerk knew it too. I saw then just how far my mother would go to keep Mrs. Moskowitz happy and I hated everybody in the world for making it so, including my mother. I especially hated her for giving me the feeling that she couldn’t be believed.

Later in my life, when I was a grown woman with babies of my own, that same shameful feeling crawled over me one morning when I got a phone call from my mother.

I had been surprised to hear from her as she didn’t call me often. She had kept on sewing and I had kept on being the fearful, good little girl in the corner—not a formula for closeness. So when she told me in a shaky voice that she wanted to tell me a secret, it made me uncomfortable. In fact, I didn’t want to hear her secret at all, but I didn’t say what I wanted to say and my mother began her story.

When she was first married, she had been left alone to make her way with me and my sister.

“You and your sister were both in diapers and your father was overseas fighting in the war.”

She got a job in a factory making purses from pieces of scrap velvet. It was a sweatshop but the boss liked her and slipped her a few extra dollars every now and then. One night, he asked her to stay and have some coffee with him after work.

She didn’t trust him.

“I was worried about leaving you with grandmom,” she said. “You know how she hated to baby-sit. But I was afraid to tell him no, he was my boss. He could’ve made things hard for me. I stayed late …several nights.”

There was silence on the phone.

“I thought I was pregnant. He gave me some medicine to ‘help’ with the pregnancy.”

She fed some of the medicine to the cat.

“It turned out the medicine wasn’t poison and I wasn’t pregnant. I couldn’t deal with it, the rape and all. That’s why I put you and your sister in the orphanage.”

Her voice broke in.

“Orphanages aren’t such bad places, are they, Melanie?”

No, orphanages aren’t such bad places, if you don’t count being three years old and watching your mother walk away without ever turning around to wave good-bye. Or if you don’t count never seeing her again for the entire two years you’re there because she never comes to visit. Or if you don’t count that you don’t know what you did that was so awful that your mother would pack you and your one-year-old sister up and drop you off at a place filled with women who wore long black skirts with long black veils who could hardly speak English and couldn’t speak Italian and who barely spoke to you at all.

I wanted to tell my mother that after all the time that I was in the orphanage I had adapted myself to it and that when I heard I was going home, I didn’t want to go home, I wanted to stay. The orphanage had become my home.

As a little girl, I didn’t learn to sew from sitting inside my mother’s sewing room and watching her. Instead, I learned about desperation and frustration, despair and fear. I learned about humiliation and class distinctions and depression. I learned that by keeping your head down, close to the needle, you maybe wouldn’t see that the rest of your world was not what you wanted at all, that in the rest of your world all the seams were crooked and frayed, that men couldn’t keep their zippers up, and that you yourself could be buttonholed into a life not much bigger than four walls because you knew how to run a sewing machine.

Ironically, my mother would eventually go to work for one of those very same talk-about-it-in-whispers-only large department stores in Scottsdale, Arizona. After 10 years, however, she lost her job as head seamstress there when she shortened a $2,000 wedding dress that nobody wanted shortened.

She was almost 80-years old when she died of complications from Alzheimer’s disease.

I vividly remember the day when I, along with my father, dropped her off at the nursing home from which she would never return. I was pulling out of the parking lot to leave when I noticed a small brown suitcase of my mother’s on the porch that had yet to be carried in.

For a moment, I thought I saw a three-year-old little girl standing behind it …looking back at me.

The Truth About Being Honest.