Forgiving Ourselves for the Things we Have Lived Through. My youngest son’s behavior history was complicated right from the start. He skipped crawling and went straight to walking. His first word was a three-word phrase “It’s all gone.” His tantrums were violent and constant and unpredictable.

In those days, I slept with one eye open. I removed the stove burner dials every night and slept with them under my pillow. But sometimes sleep won and on those mornings, I might find a trail of colorful paper Green Giants leading to the pantry where a row of shiny silver unlabeled canned goods remained, giving meals an element of mystery for the next few nights.

On another night I might find hills of flour mixed with dish soap cementing on the countertops. Childproof locks were replaced with hardware store locks until the interior looked like a serial kidnapper had a hand in the design. But messes can be swept up.

Worse were the emergency room visits. Snatching a bottle of purple nail polish remover from my hands and swigging from it, whimpering when I touched his wrist and finding he had somehow fractured it (“You say you have no idea how this happened, Mrs. ___?”), spraying foam bathroom cleaner it into his mouth like whipped cream at school, where he was even more closely supervised, are all Things We Have Lived Through.

From toddlerhood on, we visited The Experts in hopes of explaining my son’s strange behavior. This was in the late 1980’s and Autism was never once mentioned. The experts scratched their heads in puzzlement, as my son obviously enjoyed being held (as an infant he screamed when I tried to put him down) and clearly cared for everyone in his family.

This ran contrary to the image of autism the doctors held at the time; that of an unreachable child incapable of forming bonds with people.

But of course, it was autism.

Medication for my son was suggested. I was sternly warned that if I did not get his harmful behaviors under control, he would be “chemically straight-jacketed” as an adult. But changing his behavior, not merely suppressing it seemed to be the more fair option (I would cross this bridge again when I began working with dogs) and at the time the only medications available made him eerily still and quiet. So, we used behavior modification first. Not because I am opposed to medication.

I raged at the experts when they suggested I seek placement for my son. “Never,” I said. Never. Ever. Because he had no sense of danger, my son could not be left unsupervised for even one second. Going out in public was a nightmare.

Meltdowns, cursing, tantrums, items reached for and broken, people reached for and grabbed, these were all part of Going Out. So, we stayed in. We went for takeout instead. It was just easier that way.

When my son was not even a teen, I began to ask: what if? What if I considered placement? Just thinking of the possibility made me feel ill. But, if I am being truthful, just behind the sick feeling was also a tiny flutter of relief. What kind of life was this for the rest of the family? And was I being fair to my son? I wouldn’t be around forever, what would happen to him after I was gone? The experts painted a picture of placement as somewhere my son could become more independent.

Where caretakers went home at the end of their shift and new, fresh caretakers came in to relieve them, so were less likely to suffer burnout, which I most certainly had.

After meeting many, many caretakers and viewing their programs, I found one I would at least consider. The house manager was a young girl in graduate school who was becoming a Special Education teacher. I watched her gently wipe the chin of an adolescent boy who lived in the house. She spoke to him softy and treated him with kindness that could be felt. It took me a year after that to do it. The day I left him, I went home and threw up.

On weekends I made the hour-plus drive to bring my son home. On Sunday afternoon when he got out of the car, guilt, relief, and sorrow climbed back in. Living in a supervised setting meant that my son was safe but the sharp edge of that sword was never really knowing how he was being treated when I wasn’t there. Was he happy? Warm? Were the hands helping him to dress in the morning kind or were they hurried and careless? (Or worse.)

Of course, he couldn’t tell me. My son has no words other than ones he repeats to ask for simple things. And then there was the incredible guilt I felt. That crushing guilt could only be relieved by crawling into a bottle of wine, my mind finally stilled if only for a few brief hours.

We slowly began to resume a normal life. My son is an adult now. He lives in a house with other autistic adults. I think he is happy. He is not and has never been “chemically strait jacketed” despite the dire warnings I received from the experts. He is supervised at a three to one ratio (this is progress as some houses are one to one). He has had self injurious behavior episodes. Thankfully, they can be redirected.

What will happen if they one day cannot? I don’t know. I struggled with the question of fairness to him in writing this and allowing others to read it. The truth is, he would not understand even if I explained. He has no idea of Facebook, Twitter, or what a blog is. I don’t know if it is fair, but it is my story, too—one I have kept inside for a very long time. And it’s likely another mother or father’s story.

We are a small, silent club, those of us who so love our children, or parents, or a loved one and exist in the real world of How Do I Live With This. Would I do things differently, today? I don’t know. I like to think I would. But I don’t know.

I have begun the long process of beginning to forgive myself. Yoga and meditation have taken the place of overly generous glasses of wine (“Sure, I’ll have another glass. Just a bit.”) Some people will understand my choice and others won’t. (How can I expect them to when I don’t even fully understand it myself?) Life is not black and white.

It is complicated, messy, painful and often somehow Beautiful nonetheless. Through a lot of hard work on and off the mat (mostly on), I am relearning how to breathe. “Everything is perfect just the way it is even if I don’t know how or why” reminds me to trust. I do the best I can (and isn’t that all we can do?) with what I have.

It is too easy to dwell on Things That Will Never Be (marriage, children, learning to drive a car), and to ask again and again, why? But, we are not meant to know why. In our case, even if I knew why, it would not change a thing. Better to think of what is: my son does not know hate, greed or prejudice. He is kindness, love and innocence.

My son’s life is his to live. It is no less valuable than any other.

This is what I have learned: every life (human and otherwise) deserves to be treated as if they matter. Kindness, respect, patience and most importantly, love, are ours to give. We should lavish these as if they are in endless supply and not expect a thing in return. We should shower the universe with them. Do not wait.

In the end, they are all we have. 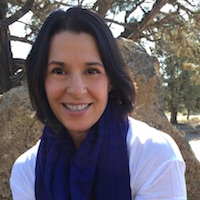