She Changed the Way We Think of Activism Forever. 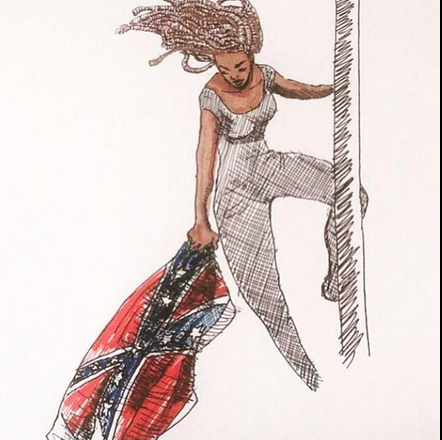 Tonight, as I watched the video of Bree Newsome taking down the Confederate Flag in South Carolina, tears stung my eyes and my heart broke open.

Everyone knew the flag had to come down. It was—at best—a thorn stuck in the hearts of those who mourned the nine churchgoers who were murdered on June 17th, remaining at full mast while the other flags at the state capital went down to half-mast in order to honor those who had lost their lives in the tragic event.

For many others, the flag symbolized something far worse: the ongoing, prevalent racism and hatred that lies at the root of American culture that remains even when as a nation we give lip service towards equality, justice, and healing.

Even South Carolina Governor Nikki Haley called for the flag’s removal, but no one actually did anything.

And then Bree Newsome came along, with her climbing harness and her prayers. She scaled thirty feet up the pole in front of the capitol building, took down the flag, and made history.

As I watched the video, tears came to my eyes because I felt inspired by her courage, her dedication, and her deep commitment to loving transformation of our society.

“You cannot get to me with hatred and oppression and violence,” Newsome shouts from the top of the pole in the video. “I come against you in the name of God. This flag comes down today.”

This. Is. It. Watching her, I realized that I was finally seeing the next evolution of revolutionary change that I’ve been waiting and yearning for—that I finally felt inspired to take action again after years of burn-out and political lassitude.

Here’s why Bree Newsome’s brave action may have changed the face of activism and change-making forever:

1) She was one single woman, acting from her heart.

So often, as activists, organizers, and revolutionaries of all stripes, we get obsessed with the numbers. The numbers of protestors at a rally, and the far lower number that gets reported on the media. The numbers of Facebook likes. The numbers of participants in our workshops, retreats, and who read our blogs.

But Bree simply saw what needed to be done, and did it. Her action shows us that the new activism doesn’t need to be about masses and number crunching, and that we can make a huge impact without the thousands of folks who shut down the WTO conference in Seattle in the 90s had to mobilize, or the hundreds of thousands of people Martin Luther King brought together in the sixties.

“Never doubt that a small group of thoughtful, committed citizens can change the world; indeed, it’s the only thing that ever has.” ~ Margaret Mead

2) She had the right support.

Although this might seem counter to the first point, they actually go hand in hand. Bree may have been the focal point and main actor in this beautiful moment of truth and courage, she was by no means alone. She had the right support—including a spotter to make sure she was physically safe, videographers to record the event and supporters who put the video out to social and traditional media. The new activism doesn’t ask us to be solitary martyrs who do everything ourselves.

We act together, and we help one another.

Too often, in our change-making work of all types, white men still dominate our leadership and take up the positions with the most visibility (just look at the lineup of your nearest yoga conference and compare it to the demographics of who goes to—and teaches—most yoga classes at your local studio, for example). In being the change that we want to become, those of us with race, gender, and heterosexual privilege have to step back and create space for new voices and faces to come forward as leaders.

4) Her action was creative and gutsy, with an elegant, powerful, simple message.

What Bree chose to do to face the injustice she saw wasn’t the same-old-same-old rally and march, internet petition, or letter writing campaign. She took creative action that was unique to her skill set and passion, in a way that made her message completely clear and uncluttered by trying to combine a hundred different but related issues through various mediums and methodologies. We see her take down the flag, we understand exactly what her intention and vision is, and our hearts burst with a sweet sense of resonance and a desire to be on her team. We want to be her, and to live in the same kind of world that she does.

Some folks I know seem preoccupied with the fact that the flag went back up a couple of hours later. But Bree knew that was a distinct possibility when she went up that pole— as she came down, we hear her assuring the police that she is prepared to be arrested.

Does that make her action a failure? No. The hashtags #FreeBree and #KeepItDown have been trending on Twitter constantly since her arrest, her crowdfunding campaign raised $25,000 within three hours, and her photo has graced the virtual front pages of everyone from Variety Fair to the Huffington Post.

Bree’s act was one of devotion, prayer, and power.

People are talking about her—not just politically savvy folks that already identify as being activists and changemakers, but housewives who “know the right thing to do when they see it,” and my “conscious” friends who go to ecstatic dance and meditation workshops and have been consistently turned off by the yelling and anger of other forms of activism, and my potato chip and soda guzzling guy friends from back home who just think Bree’s a badass.

Which she is, obviously—and her badass action forces us to ask ourselves a couple of beautiful questions.

What can you and I do to inspire change in such a fresh, radical, heartfelt way?

What injustices and hardships do we see in our communities that need someone to step up and change them?

Who can we ask to support us in stepping up to be the person that does something about it?

What is the one unique, bold, truly inspiring thing you and I could do today to help transform and heal our world?

What better time than now, and who better to do it than you (and me)?

Image of Bree Newsome posted to twitter by @Niall_JayDub 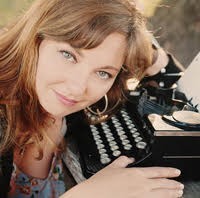 Rebecca Rose Sang is a writer, alchemist provocateur, yogi and transformational coach for those who want to live, work and write from the depths of their souls. She lives in t… Read full bio