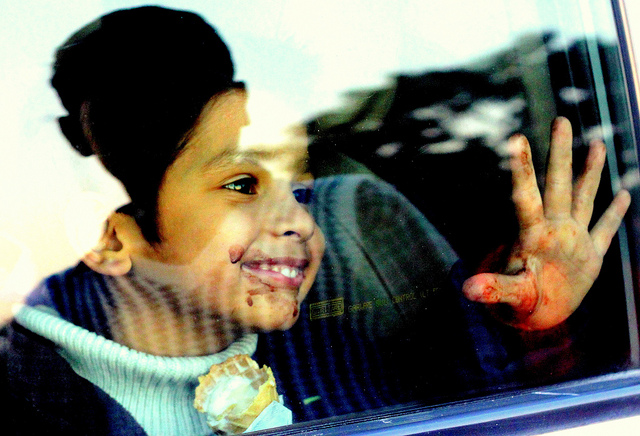 “The indigo child is here to bring us closer to our true essence. We think our minds are separate because of our bodies. These children know differently. A true indigo travels comfortably between worlds usually at night when we think they’re asleep.” ~ Sandra Weaver

Indigo children were the first in a series of light workers that were sent to Earth to help raise the level of consciousness of others.

Thousands of years ago we were taught to think instead of feel—indigo children were sent to Earth to help all of us remember what it means to live from our hearts.

Right now one of the current buzz words is empath—it seems right along with authenticity, it’s the new phrase that is on everyone’s lips, but the truth of it is that the qualities of an empath are closely related to those of what an indigo child would possess as an adult.

The theory of indigo children originated in the 1970s by Nancy Ann Tappe. Tappe studied the human auric field, otherwise known as their electromagnetic field—this field surrounds every living thing.

Through colors in the aura, she developed an accurate way to psychologically profile a person using her new auric color method. The signs of an indigo child actually began even as early as in the 1950s with a few people. What she noticed was that 80% of the children born after 1980 had a new deep blue colored auric field—she called this new color “indigo.”

Indigo children began being born in the 1980s, and were thought be have been sent to Earth as light workers to help society evolve into a more emotional conscious way of living. Indigo children were said to have special qualities such as being highly empathetic, curious, strong willed, highly intelligent, sensitive and intuitive.

Indigo children were often thought to be strange—possessing a strong sense of purpose and life direction. They also are likely to have shown a deep sense of spirituality (apart from religion) from early childhood. Indigos often tend to resist highly structured environments and will often challenge authority.

I grew up being told I was an indigo child. My mother always told me that my sense of intuition and empathy even at three-years-old was highly unusual—I would often leave her speechless with the things I said.

I struggled a lot as a child feeling misunderstood—not being able to fit into the normal life that a child is supposed to lead.

As I’ve grown up I became more accurately aware that my life vision and how I process emotions is not the same as others. It is not uncommon for me to feel the emotions of others without having any physical or verbal contact with them.

I pick up on vibes and energies from people almost like an antenna for a T.V. might—and when asked how I know something for certain, I can’t explain it other than that just feeling it.

These feelings of sensitivity and intuition are common among those who consider themselves empaths—yet these traits don’t just suddenly manifest themselves in adulthood. More likely they were missed all together, either because parents lacked the awareness to recognize their child was different or because the child never let on as to how they were feeling.

Indigo children are special beings that are necessary in today’s world. They were born to challenge the status quo and to remind us why we are all here in the first place. They don’t necessarily think their way through life, but they feel it—deep within their hearts.

An empath is often a term used for adults who are sensitive—to the visible and invisible—picking up on body language, tone of voice, body movements, the spoken words of others, the words they avoid, the logic they use and the hidden things that only an empath can sense inside another person.

This ability to “just sense” something is what many indigos feel as children, and if they acknowledge their differences they will, most likely, experience many of the qualities of an empath as an adult.

The indigo child who has grown up will likely have deviated from societal norms—they may still be highly sensitive, empathetic, intuitive and even psychically inclined. They will probably gravitate towards writing, teaching, making art or some other venue where they can share their creative view points with others.

The indigo child who has grown into an empath who is self-aware, is one of the greatest gifts to our society.

These are adults who have a strong sense of responsibility for achieving the higher good and making a difference in the world. They also are likely understanding and caring towards other people, animals specifically. Most indigos turned empaths will have one or two particular areas where they feel impassioned—using them to make a difference.

Indigo children are also crucial for the evolution of our society because it is these adults that are giving birth to the Crystal and Rainbow Children.

Indigo’s were the first light workers to come to Earth. They were sent here to see if it was safe for sensitive souls to come to Earth to make a change and they are also the trailblazers who will pave the way for the future generations.

“Your work is not to drag the world kicking and screaming into a new awareness. Your job is to simply do your work- Sacredly, Secretly, and Silently…and those with ‘eyes to see and hears to hear’, will respond.” ~ The Arcturians