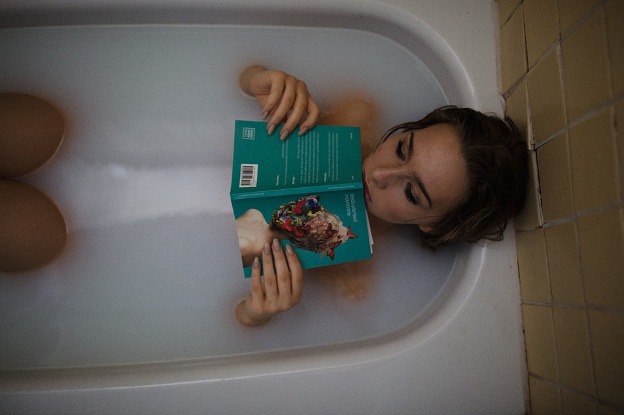 *Do not try this at home if you have an IUD, are pregnant or think you may be as certain herbs have been known to induce labour. Consult your physician or naturopath before trying this home remedy.

In January I had read an article on Elephant Journal about the benefits of vaginal steaming—I was sold!

I routinely try alternative remedies and medicines from other cultures and so this seemed like a perfect fit for me.

I began steaming at the end of the month about a week or so away from the start of my period, because that is when the cervix is slightly opened and therefore the steam will be more beneficial.

I did more research into what types of herbs to use for the steam, and decided to use dried lavender because it is soothing, relaxing and gentle on the body.

It is recommended for a variety of uses.

I would place a pot of water on the stove and sprinkle the dried lavender on top, once it began boiling I would turn off the heat and take the pot and place it between my legs and lay down with a blanket all around me for about twenty minutes.

Immediately the first month I had no cramping during my period at all, and it was shorter in duration as well. I also noticed that during other parts of my cycle my vaginal lubrication was increased and I was experiencing stronger orgasms.

I was shocked at the differences I noticed so quickly.

Soon I began telling all of my friends about it and began handing out small bags of lavender to them so that they could try it at home themselves. Mostly all of my friends saw the same results—although they did not steam as regularly as I did.

After steaming for three months consecutively I forgot to do it one month and it was my most painful period to date—at that point. I remember being doubled over at my desk and carrying ibuprofen with me everywhere I went. I wasn’t sure if it was just coincidence or not as I could not find any research on this as a side effect, but mentally made a note to not skip any more months.

I continued steaming for a few more months and my results were just as spectacular as they were in the beginning. To be able to do a natural herb steam and then not have to take any over the counter medicines during my period was an incredible find.

This past month has been an extremely busy one for me, and once again I forgot to steam prior to starting my period.

I awoke early in the morning to the most awful cramps I ever had in my life. The only comparison to them was the contractions I had when I was going into labor with my children—I literally had to breathe through them. One cramp actually brought me to my knees on the floor in my house where I had to stay for a few minutes until the pain subsided enough so that I could stand and walk again.

I had never steamed while on my period, but as this pain was so intense that I decided to give it a try. I set myself up the same way I had previously and steamed for two twenty minute sessions. Halfway through the first session my cramping subsided and by the time I was finished with my second session they had stopped completely.

I had never steamed to relieve cramping, but because of the gentle heat and the benefits of the lavender, after doing this I didn’t get a cramp for the rest of my period. While I had the privilege of being able to treat my cramps in this way on this particular occasion I know that it is not something I can do each time I have my period which is why I have decided to be vigilant in steaming prior to the start of it from now on.

Afterwards, I reached out and talked with other women who have adopted this practice long-term, and it seems that for many once we start this practice of steaming—our bodies become reliant on it. They also said that if they skipped a month their periods would be extremely painful and heavy.

The original article that appeared on elephant journal made no mention of this.

I am very thankful that I have tried this, and I will continue to steam. I just want other women to be aware that while the benefits of this are amazing, the side effects of then skipping a month can be awful—especially for those women who experienced heavy painful periods prior to their first steam.

Alternative remedies are amazing, especially those based in ancient wisdom like the vaginal steam—but we also, as women, have to be aware of all of the possible side effects before making the choice to try them.

The Menstrual Cup Changed My Life: 6 Reasons to Switch.