Stand in a Circle & Shoot. 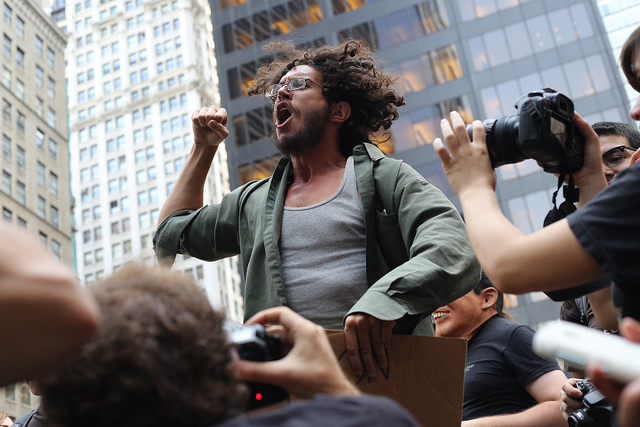 There is an old joke about how to form a leftist firing squad: stand in a circle and shoot.

The leaders of the French and Bolshevik Revolutions slowly killed one another off, until they settled on dictators.

Something similar happened with the Arab Spring in Egypt. Many of the same protesters who flooded the streets for democratic change later marched in a coup against their own democratically elected leader, who was just awarded a death sentence. The pro-Palestine movement often demonstrates similar tendencies as well.

Revolutions have a way of “eating their young.” A scene from the French film, Danton, is illustrative. Amid a mass purge of French Revolutionary leaders, Georges Danton, is standing trial on trumped up charges. At one point the prosecutor cites the constitution, to which Danton thunders back, to paraphrase from memory, “You don’t have to tell me about the constitution; I wrote the constitution.”

The scene is reminiscent of the Greek God Prometheus, chained to a rock in the Caucasus for bringing fire to humanity, and yet utterly defiant of his captor Zeus, secure in the confidence he has done right. Karl Marx identified with Prometheus for his persecution, his defiance, and the suppression of his productive powers and took it upon himself to unleash the forces of a new mode of production through mass revolution. But all too often, the communists too turned on one another, often with genocidal fury. Perhaps this is part of why Marx has been reputed to have said in life, “I am not a Marxist.”

This attack on those who might free us from injustice calls to mind the assassinations of Gandhi and Martin Luther King— each downed by extremists. And it is similar to attacks on the more humble online anti-occupation organizers, where all too often we all gather on my Facebook page to stand in a circle and shoot. One can witness a similar scene in spiritual movements, which are all too prone to splitting as well. Why do movements for change so often attempt to destroy their own leaders and then fall out among themselves?

Activist movements tend to address social maladies and injustices others do not want to see. Since there is always a danger members of the movement will themselves turn away from suffering, we post graphic images, cite shocking statistics, and band together in solidarity in an effort to maintain our agitation. We band together to develop and sustain our critiques, to reinforce a narrative, and to better organize for action. But the solidarity can lead us into echo chambers, where the information once used to bring balance becomes the only to which we are exposed. Individuals self-censor for fear of being mistaken for the enemy. And the movement becomes a caricature of itself, irrelevant to mainstream discourse.

What looks like an emergency battle to the newcomer can appear to the experienced activist but one instantiation of a wider war. Hence, experienced activists who see these processes at work, often seek to tone down the rhetoric and wind up being shunned for their moderation. People who speak in measured tones can be mistaken for the enemy, who uses the same measured tones to justify his injustices.

It is not easy to sustain movements for social change. Activist movements tend to grow out of social frustrations, seized on by organizers. Participation comes in waves, rising and falling with unpredictable cycles of agitation. These energies must be organized on-the-fly, and this lends to the activist projects a sort of ad hoc incompetence. They tend to have little resources, and the cards are stacked against them. Hence, they often feel hopeless, and the sense of hopelessness, coupled with the fixation on injustice, breeds cynicism. Most activists do not last long: either they burn out from facing so much suffering and injustice, or else they leave disillusioned.

There is a tragedy at the heart of many movements for social change. Activists tend to be highly egalitarian: they want to eliminate injustices and put an end to hierarchies. But while some hierarchies are sustained through economic privilege and political protection, natural hierarchies are much harder to level. Some people are simply more skilled, more dedicated, more likable, and more networked. These natural leaders gravitate toward the center of any movement for change and often galvanize action. But they recapitulate just the sort of hierarchies the groups they lead are trying to eliminate. And if they succeed in attaining power, the leaders might then go on to hold higher office. Absolutist movements taking aim at power are corrupting—absolutely.

There are many dangers inherent in movements for social change. Certain religious and nationalist movements serve as the last refuge of scoundrels because they are meritocracies of the fanatical: a man need only extend his dedication to its extreme in order to rise to the top. Leftist movements tend to require more organizational skill; but they also provide a forum through which unqualified people can satiate their need for attention and accomplishment. Some of the leaders that get attacked are actually unqualified egomaniacs being weeded out by more competent cadres. But many movements for change are infiltrated with enemy agents. These movements can take on an aura of paranoia that is only compounded by the mistrust of power that draws people to the movements in the first place. Powerlessness is also corrupting; sometimes more so.

The activist legend, Ralph Nader, once boomed in a public talk I attended, to paraphrase, “The corporations are 40 hours a week; we need to be more.” But it is not simply that we need to work harder than the corporations or even smarter. We need to bring to our movements the same professionalism, the same respect for competence. And we need to create the conditions in which sustained and concentrated work might occur. This means respecting the hard work of leaders, whose labors often involve creating opportunities for a whole new set of leaders. And we need to find respectable roles for non-leaders. It means knowing when enough is enough and not pressing ourselves to take on more than we are capable. It means maintaining basic decency and civility in communication. And it means setting standards for participation. There are lines, the crossing of which should result in non-participation.

But there is more: movements for change need to take care of their members. We need to be sensitive to the traumas that observing so much suffering from a distance can bring up. We need to check in with one another and tend to our wounded. Not doing this is natural and normal, but so also is the warring state of humanity: it is our job to learn to do better.