Want a Proposal? Put on a Bikini & Read This. {Recipe} 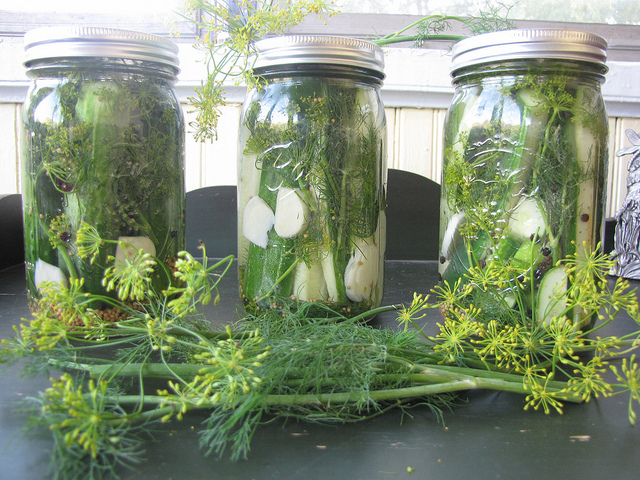 It all began quite innocently.

I wasn’t trying to get a proposal. That’s a lie, actually, I was, just not on that exact day.

My lover called to ask about dinner plans.

Clutching the phone between my face and shoulder while pulling hot jars from the oven I said,

“I can’t talk to you right now, I’m jarring pickles!”

Now, this man, who I was completely mad about, was used to the fact that if it was strange, I was going to try it. But, having spent some years playing hockey in Europe and living the life of an athlete, he was just not used to the domestic deva type of girl.

His was more of a shiny, long-legged blond type.

I can assure you that I am very short of shiny or blond. Dating me was straying into the quirky, “how about we live in a cabin without running water” end of things.

Anyway, back to the pickles. It was late July, hotter than Hades, I was wearing a bikini and an apron and was slaving over a hot stove making pickles because I am Polish (pickles served at every meal) and a back-to-the-lander at heart.

He came over faster than you could say supercalifragilisticexpialidocious.

The look on his face was priceless. A bikini clad, apron sportin’, twelve pickle slinging gal can be quite enticing, I suppose.

“You really are making pickles!”

“When will you be done?” He asked, grinning.

“I want you to take that apron off.” His eyes were nothing if not rakish.

“You know that you can buy ready-made pickles. Why do you insist on doing everything the hard way?”

By this he meant my own hummus, jam, bread, cakes, tomato sauce, salsa, calendula balm, dried mushrooms and cheese.

I scoffed. “These are self-fermented, no vinegar. Pro-biotics, you know? You can’t just buy these.”

First time ever mention of the “M” word! I maintained my composure and gave him a seductive smile. The apron strings were being untied, by him.

“Because you’d prove useful—in case of catastrophe or society collapsing or something.”

You can imagine the rest.

But that is not the best part of this story. The best part is that by learning old fashioned skills, like food preservation, knitting, growing your own vegetables or making simple medicinals, we are preserving knowledge that is quickly disappearing and is indeed useful within a sustainable society.

We purchase many things that are manufactured or grown far away, the connection between customer and producer is mainly lost to us in modern society. We have also lost a plethora of skills that once we could not get by without.

I think that we are all worse off for this. Self-reliance is a tenant of sustainability.

At the risk of sounding like a survivalist, what if there was need for old skills again for some unforeseen reason, or even a foreseeable one, such as oil shortages (oil is a considerable part of conventional food production), rising costs to food distribution, or crop failures due to weather?

Could we as a community survive with what could be grown, produced, traded or sold locally?

When we preserve and practice old fashioned skills, we are also honoring our elders—who better than them to pass on their knowledge and wisdom?

We can also teach our children and engage them in activities that require math, reading and problem solving skills. It’s hands on, it’s done in at least a group of two, if not more where co-operation is a factor, and encourages independence.

Besides, it’s fun! There is a lot of Zen in kneading bread or patiently stirring some simmering jam.

I cannot even tell you what satisfaction can be gleaned from a tidy row of jars full of salsa. Indulging in home preserves on a winter day while a storm rages on, re-capturing the bounty of summer crops is empowering, delicious and a decided part of an eco-lifestyle.

You might have your own strategy for landing a man and if it works, great. Or maybe, you don’t want a man at all, but just happen to like a good pickle.

Either way, here is a recipe. Give it a go. It’s green. It’s healthy. It’s a nice way to spend a summer afternoon with yourself or your lover. Wear a bikini.

For one quart/liter preserving jar—these will be full of probiotics, good for anyone with a compromised digestive system. Cancer patients also benefit greatly from lactic-acid fermented vegetables, especially sauerkraut.

Boiled salt water for filling up the jar (1 ¼ tbsp. salt to 1 quart/liter water)

I like to make pickles on a fairly warm day as the fermentation process for lactic acid production will happen reliably. The vegetable produces its own lactic acid but if you wish, you can add a tablespoon of the whey water found swimming on top of organic yogurt.

Pack the cucumbers, onion, garlic and spices/herbs into a hot clean jar until the container is about 80% full. Pack the cucumbers in, they will shrink a bit during fermentation so a tight fit is okay.

Fill the jar with salted water (and whey if using) making sure there is a ½ inch layer of water on top of the cucumbers and seal tight.

Leave the jar(s) in a warm place for 10 days for the fermentation process to begin (on the counter is okay) then put in a cold place for storage.

Ready in three or more weeks in cold storage. I wait longer but it’s a personal preference. A white fermentation film will settle on the bottom of the jar, this is the pro-biotic part, do not be afraid!

That’s it! Easy peasy. Self-fermented pickles will have their own flavor if you’re used to vinegar, so don’t expect a store bought state. Delicious!

Let me know how it went.

Seduction Begins the Night Before. {Adult}