For the Women who Struggle to be Seen. 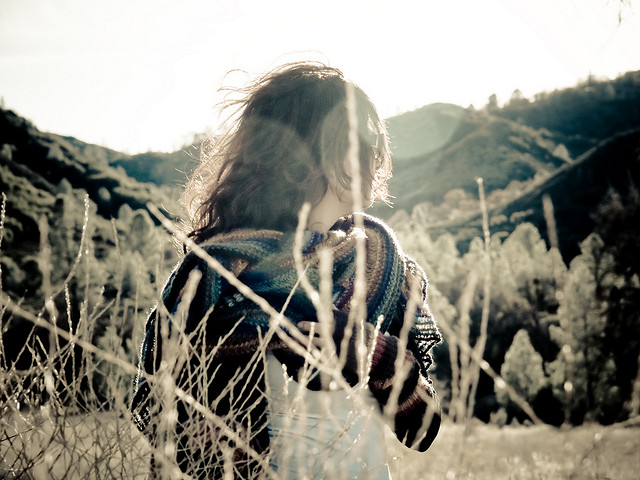 “Vulnerability is about having the courage to show up and be seen.” ~ Brene Brown

She always had a certain look about her.

Maybe it was the way she wore her sadness like a scarf of silken indigo, tied tight around her shoulders.

Or maybe it was the way that hope seemed to radiate off of her smelling like sunflowers and sunshine.

Whatever the reason, there was just something about this woman.

Something in the way that she smiled, yet seemed on the verge of tears.

There was strength in her vulnerability and sometimes there was a part of her who just wanted to be taken into strong arms and cradled like a child.

But more often than not, the rains that fell behind her eyes were confused for storm clouds and no man could ever move past the turbulence that surrounded her.

They became distracted by the sultry wash of blues and greens, the pale roses of soft curves that could envelop them—so they never really saw the woman whose only wish was to be seen.

Men felt terrified by what this woman represented to them.

They shook, they withdrew, they broke away and left her in silence more times than she could count.

They saw her as their undoing, while she simply saw it as love.

These men are the ones who taught her that to love is a choice—and it’s one that never seems to choose her.

And so this woman withdrew into herself, as the buds of flowers underneath the bright moon.

To be tended to as the most beautiful roses.

She seeks a gardener who will still tend to her even if his thumb is pricked by her thorns and he bleeds.

This woman can’t stop dreaming in sweet teas of hope, even when she is the only one doing it.

No matter what life has shown her, she still wakes each morning with a smile for the sun and a heart that believes today can be a better day.

Because there is just something about a woman who knows how to live with a broken heart.

It might be in the way that she extends love so freely to those around her or in the way she goes out of her way to help others.

Or it could be in the way that she will be smiling one minute, only to have a flash of a memory, her eyes filling with a sadness that splashes out over her cheeks—for it seems she is always trying to smile away her tears.

Possibly it is in none of these, but maybe it’s in the way that she waits all day for the moon, because she enjoys resting in the darkness soaking into invisibility.

Whatever the reason it’s an air of tenderness that hangs over her head inviting strangers to reach out and extend kindness and love.

Because there is always something about how this woman smiles and shakes the world.

There is nothing more exquisite than the way that she dances with her demons and makes love to her future.

Because no matter how many times men have run away from her eyes—that broke them in two—they always seem to return.

For once you have made love to a woman who has seas in her eyes and cosmos beneath her skin—all the rest pale in even the sweetest comparisons.

But it isn’t because she is beautiful that has them coming back nor is it because of what she does for them, and it isn’t even because of how she sets fire to their desire—but it’s because when this woman opens to a man, she invites them into her world.

A world of silence and love, of sweet apple crisp and hilltop moonshine, nights that seem to last forever, and a future that seems impossible to grasp.

It’s words that echo in the mind long after they have disappeared from the page—it’s the taste that they never knew existed but have quickly become their favorite.

To have someone say that they will protect her heart from the world, that continually tries to sell her short on big dreams and courageous acts.

Because despite the bitter taste of heartbreak, she knows that someday there will be a man who opens his eyes and sees her for the woman who she really is.

Every little curve and sweet flaw—and he won’t ever wish for her to be anything other than who she is.

And in that moment, when he is looking at her like she is the sun—she will understand why she held on for so long.

Because there is nothing more beautiful than being truly seen.