Let’s get Intimate: It’s either her or Me. {Adult Q&A} 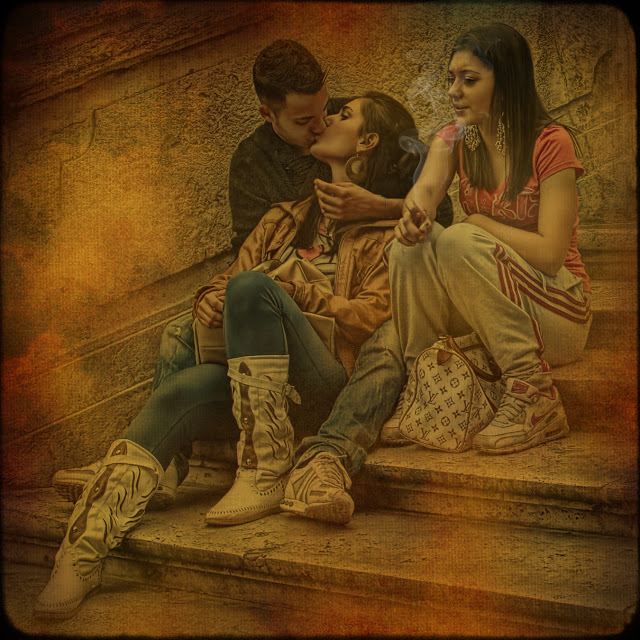 Do you have questions about creating intimacy or developing mindful relationships?

I want them. Email your questions to [email protected].

All relephant questions will be answered with loving kindness. (Yes. Every one.) Authors remain anonymous.
No judgments, just soulful answers.

“When you want something, all the universe conspires in helping you to achieve it.”  ~ Paulo Coelho

Q: I met a man just over a month ago while camping with friends.

We connected right away, although I wasn’t initially attracted to him romantically. We spent most of the weekend talking and laughing together and it was wonderful. By the end of the weekend I found myself quite attracted to him but told myself he wasn’t the man for me because he’s a couple years younger and doesn’t have kids. (I have two kids and don’t want any more.)

After we came back to reality (city life) we connected via social media, then text message. A barrage of flirtatious texts flew back and forth between us for a couple days, until he confessed that he was in a relationship, albeit long distance.

I was shocked by how upset I was to learn this. I hadn’t realized how attracted to him I’d become, and even then denied it to both myself and to him. I had a good cry, then responded by saying I wasn’t interested in a relationship with him anyway, so it didn’t matter. (I may or may not put on a tough-girl persona when dealing with difficult situations.)

After I gave him sh*t for lying to me about his relationship status, things went back to how they had been between us. He had me over for dinner and drinks a few days later and I wound up sleeping with him. Things can sometimes be awkward with a new partner, but everything has felt natural with him from the get-go.

He told his girlfriend about me the following day. Because of the distance, she accepted his infidelity and chose to forgive him. (She’s a better person than I am.) Since then, we’ve spent time together when our busy schedules permit. I become more and more emotionally attached to him as time goes by. There’s an intimacy between us that’s deep and non-sexual–or, at least not entirely.

I guess my question is should I tell him that I want him to choose between his current girlfriend and me or should I wait for him to make the decision on his own? I don’t want to be his mistress forever, but I don’t want to pressure him either.

In the past, one of my biggest downfalls has been not giving my partner enough space to work through their sh*t at their own pace—I’ve had a tendency to push things, which is unfair to everyone. I don’t want to do that with this man.

A: You both seem to be living in an emotional war zone. Mixed messages are flying back and forth like bullets.

He is committed to another woman but is behaving as though he isn’t. You’re enjoying his company more and more with every passing day, but telling him you’re not all that interested in a real relationship. He told his girlfriend about you, and she forgave him, but he’s continuing the infidelity, meaning that he must care about you in some capacity. You “gave him sh*t” for lying, but aren’t you also withholding the truth?

This fact may be hard to swallow, but there is no way he will leave his girlfriend unless and until he has a good reason to.

That reason ultimately comes from him, but it does involve your full participation. That means you need to make your feelings known to him. It’s a scary prospect, especially when you realize you’re facing the fact that he may not choose you. However, I speak from experience when I tell you that while there is something intoxicating about a slightly naughty and exciting relationship, it is far better to accept the truth.

I had a 25-year on-again-off-again relationship with a man with whom I was deeply in love. He had not one but several girlfriends throughout the course of our courtship, and he cheated on every one of them with me. I thought this somehow made me more valuable to him. It did not. It made us both greedy and selfish. It took years of deep conversation and ultimatum slinging to accept that this man simply did not want me. He loved me, and he was attentive to me when we were together. He enriched my life in a way no one else had, but ultimately he did not choose me as his mate.

Clearly, we were not meant to be life partners to each other. But did that invalidate our relationship? Absolutely not.

When I was finally able to honor the actual relationship I had with him and transform it into what it was meant to be—a deeply intimate, non-sexual friendship—something miraculous happened: I met the love of my life.

When we turn our focus away from that which is not working for us and begin to nurture our health and well-being, we send a different, more empowered energy out into the universe. And the universe responds by sending us what we need.

Now, I’m not saying that your man will behave the same way my friend did. He may well be relieved that you’ve opened your heart to him. In fact, he may be waiting for you, not the other way around. Regardless of his reaction, you owe it to yourself to step into your power and express your feelings. If he’s not ready for you, the right man will be.

There’s a Lakota saying that I love: Hanta yo! It means, “Clear the way!” Typically it is said when we are doing deep spirit work and want to obstacles on our path. I invite you to shout this expression as often as you can, either internally or out loud. Clear the way for your mighty love, and know that it will return to you as it is meant to.

Why We will Never “Find” our Soulmates.