My Sister, My Saviour. Watching my sister fall apart was one of the hardest things I have ever gone through.

It rivals my own cancer diagnosis with equal fear.

She was the one who has always been strong and always had her ducks in a row, the one who was financially stable, fiercely intelligent, and more physically capable then anyone I had ever known.

That is my sister.

Little did I know about the quiet chaos inside of her, the demons that plagued her mind and spirit. I saw her eyes change slowly, her spirit silently tuck itself away behind some long lost memory. I watched her drink and drink and then maybe drink some more.

I watched her put on a song and dance for the world around her until she just couldn’t do it anymore.

After she moved in with me, I could clearly see the changes in her personality. I could see her pain and fear, I watched her try to mask it with medication and alcohol. The charismatically passionate woman that had carried me through so many of my own trials was slowly fading away. She would retreat to her basement room and read or listen to music, she would try to work out or organize, she would do anything but be alone with her thoughts.

She stopped sleeping, stopped being the person I knew…her pieces were falling apart.

Then came the night I woke up and found her at my kitchen table, smile on her face and drink in hand. A quick hey and a smirk, I sat down beside her. We talked, about nothing, stuff and things. Her eyes were red, I could see the tears she was holding back and I said, “What’s wrong?”

So many times in life we ask questions, seemingly simple questions. I have learned over time that they are not always so simple—we must be prepared for any answer.

How many times in our life do we—or they—just smile and say, “I’m good,” when really they are dying inside?

I wasn’t ready for that.

I feel like in that moment my heart stopped.

That must have been how she felt when I told her that I had cancer—that feeling of fear washes over you and floods your entire being in seconds.

I was not ready for her to tell me the truth, even though I knew she was not “okay” as she had said so many times before. I felt lost in that moment, I felt afraid, terrified. My world had flipped upside down. The person that I used to run to when I was so weak, the person who was the strongest, the person who was my hero, my savior, my rock, thought regularly of killing herself.

In that moment, everything slowed down. My mind plays it over and over again in slow motion. I didn’t know what to do. In that moment the deepest kind of fear filled my soul—a fear that I pray I will never feel again.

My sister has been my hero for as long as I can remember. She was the one who put my pieces back together after my parents divorced when I was six years old. She was the one who could pick on me relentlessly but if anyone else did, they better run. She was physically and mentally stronger than anyone else I had ever known. She could hit a grand slam and clear the bases at every coed league softball game, always leaving the men speechless.

She joined the military at seventeen and has seen the world, the good, the bad, the war-torn, and the indifferent. She devoted 22 years of her life to protecting our country and faced deployment into the unknown three times. To say that I was honored to call her my sister, to say that I was proud, no matter what I could say it would fall short to describe the amount of admiration I have for her.

She is fearless and fierce—and if I had one person in this world to have my back, it would be her.

She held my hand through a terminal cancer diagnosis, she walked with me through the birth of my daughters. If I called she was there, if I needed her she flew in, if I was sick she was the one dragging me to the hospital.

She even saved my life on one occasion, as I was dying of a severe bone marrow infection, too stubborn to listen to anyone but her. I do not question her love and devotion for me, she would die for me in a heartbeat.

This woman, this soldier, this amazing warrior was telling me she no longer wanted to live.

The next day some calls were made and the wheels were set into motion. My sister was checked into a mental health facility and though it was terrifying, she was safe. I felt so lost at that time, so sure it should be me, the weak one, who should be in there and not her.

Why is the thought of getting help so tied to the concept of weakness?

I see now how incredibly strong one must be to reach out. How much strength it takes to say, “I know that I cannot do this on my own.” I have learned that we all fall victim to the human condition, we all have times in our lives that life overwhelms us. Those times do not define us, they are not the definition of who we are.

Those times are just moments in our existence that we need help.

How we live through those times, how we work our way through the valley, that is more of a definition of who we are.

The stigma our society has attached to people who go get help is why so many people don’t. “Help” should not be a whisper behind closed doors. It should not have to wait until you are moments from ending it all. We should encourage and lift each other up on this journey. We should not judge or criticize the shoes that others are walking in.

I visited my sister every time I could and I saw the positive change in her eyes right away. I watched her come back to life, I watched her regain her fierceness and spirit.

She is still the strongest person I know, I did not think it was possible to admire her even more than I did before, but I do.

She has removed the stigma I was blinded with when it came to mental health. I can clearly see the strength and courage it takes to willingly take the step to reach out and ask for help.

My sister has always been and always will be my hero. 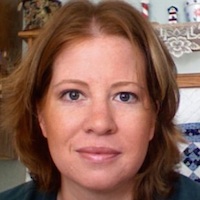