She Finally Forgave Herself. 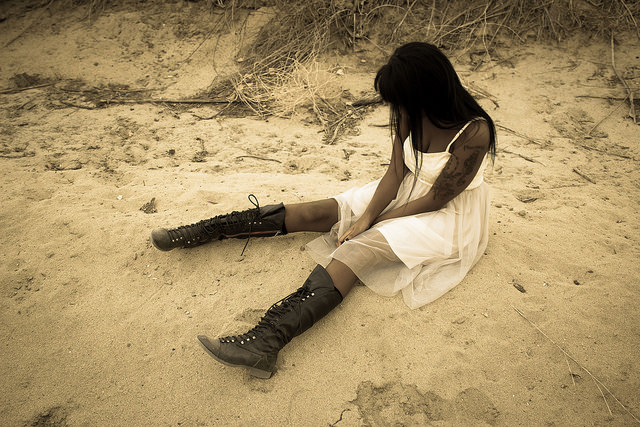 She had put her delicate heart, her weary soul and her aching bones through so many incredibly painful and arduous battles.

And for what? What war could possibly warrant the destruction of her mind and, at times, parts of her body?

She had lost all sense of who she was over and again. She had trodden the lines of fine ropes that were frayed and that dangled precariously over the most treacherous of seas.

At all times she was taking one step towards happy-ever-after whilst the other step tenaciously clung to false promises, illusions and make believe.

Constantly searching for truth, both in love and in life.

She convinced herself each time that things would be different “this time.” Her eyes were open and the lessons that haunted her would finally be learned and the ghosts and skeletons laid to rest. She thought.

Though it was never to be.

For each time she almost reached her destination she would stumble and fall into the vast ocean that engulfed her limbs before washing her ashore once more.

But she would always rise.

Although ravaged by ferocious waters she was never defeated.

“Temporarily weakened, permanently stronger,” she would tell herself.

As she battled on she grew frustrated with herself. Angry even.

She berated herself and questioned all that she knew as she headed towards glimpses of light peeking at the end of long dark tunnels.

“Why?” She had asked repeatedly.

There were never any answers that justified the excruciating pain.

And really, she didn’t need to solve each and every puzzle.

As all is not ever as it seems.

She realised she would drive herself crazy wondering what people’s true motives and intentions were and why sometimes others acted the way they did.

The truth is—she wasn’t always going to understand. She wouldn’t understand why she sometimes caused other people pain or why others were the cause of her pain.

Hurt people hurt people. There aren’t always the answers as to why.

However much soul searching she did or however much she went over every detail of each word and each action that was taken, she would never ever find all the details to complete the stories.

One thing she did have though was accountability for her self.

Something she had lost so many times.

She had blamed and accused and believed that others were solely responsible for her pain and for her bruised and battered wildly beating heart. She had caged that wild thing long ago. For fear of what harm could be done to it.

There was barbed wire bound all around it so no danger could penetrate, wound or break it.

She finally discovered though that all of the damage that had been done had been inflicted by no other than her self.

Her scars had been transformed into pieces of art. Tattoos that she’s painted with her own shaking hand. She saw them as memories of a past she hoped she would never return to.

What she began to realise though is that they were also triggers. Medals to commemorate explosions of gunpowder that should never have been released.

Battles that needn’t have been fought.

She was at war with herself.

She realised she was her only enemy.

When she looked into the eyes of her opponent the mirrors reflected her nemesis.

She chose to listen to the ones who reflected her innermost fears.

She chose to keep company with those whose actions repeated to convince her that she had been right all her life. “She was not worthy.”

She had betrayed herself and judged herself for far too long.

She retold and believed her own foolish lies.

She was a child of war. It was all she had known.

She found comfort in habitats with those whose actions felt familiar and resembled battlefields.

She thought that she was proving her strength when she endured and survived each round.

What she finally came to realise was that her greatest strength was found when she chose to love—but more importantly finally forgive all that had been done to her self.

She forgave and let go of everything that she and others had put herself through.

She let go of all the pain she had caused herself and forgave herself for each time she had called herself a failure.

She let go of the need to be right, the need to create perfection and the need to keep her self down where she wrongly believed she belonged.

She let go of needing to know what waits at the end of the storm.

She had forgiven others so now it was time to forgive her self.

The conflict was over.

She stopped punishing herself.

She stopped causing herself harm.

The Key to Freedom is Forgiveness.