Taking Off the Personality Suit: A Non New-Agey Experience of Meditation. 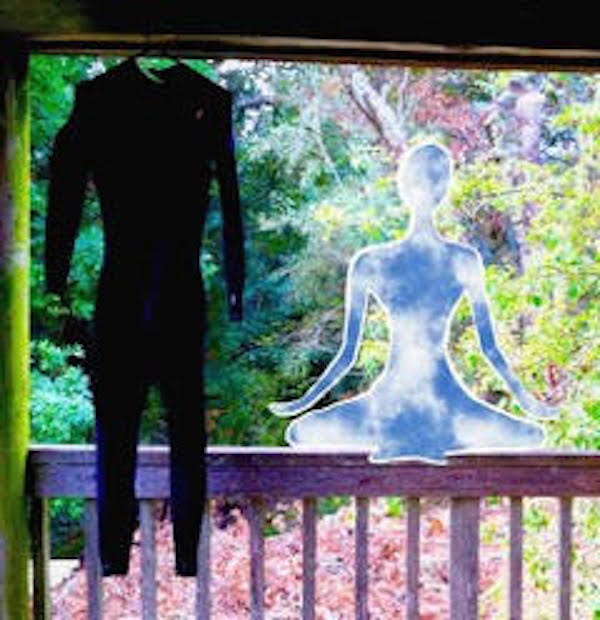 It thought about whether or not to open a message that made a *ding* on my phone. It went outside and greeted jumping dogs. It shared some espresso with a neighbor. But before any of that, it made a choice to visit stillness.

My new routine each morning is to set my alarm for three different times.

The first one gives me five minutes to wake up, stop dreaming, and reorient myself. The second one gives me 10 minutes to let my mind do whatever it wants. I allow and watch thoughts. The third one is my signal to get present. Several minutes of presence moves me to the next layer, a void. Pure energy that exists in me which is not connected to what I call a personality suit.  Sometimes, it can take as little as two minutes, and other times, 20 minutes is just a warm up to truly undress the personality suit.

In the beginning, it is breathing and being purely present in the body, feeling everything below the neck, then listening to all sounds and feeling the quality of the air. It is a full attentiveness to presence experienced in this body.  The mind is mostly cooperating and getting off the stage, but sometimes, like a court jester, it makes a concerted effort to intrude. When this happens, I eventually stop reacting to the jester, which is the mind. The jester has its own brand of ADHD, and it works to steal my attention. When it doesn’t get attention, it gets off the stage. The Buddhists talk about the monkey mind.

Many years back, I read a simple little book with few words by Alan Watts called Meditation. On one page I was able to get the most value. He said if sounds can be similar to wind, they can be put into the background and eventually they disappear. He said if you think about thoughts like sounds or like wind you can do the same thing with those. Once that level is achieved, there’s a going into what can be described as a purely receptive state. To get to the state of the void, it starts with a choice, and then a noticing, and then a letting go.

The void is a place of no mind, no desires, no reactions and no attachments. There may be a sense of nothingness that comes from going into this void, but other times, little messages seem to be delivered, like meteors in the wind which fly by. When the jester leaves, and the meteors stop flying by, that’s when there is an arrival at somewhere truly fresh and new. Pure open territory. This state of open territory is better than any drug, and believe me I’ve tried several. This open territory is the blank canvas behind the blank canvas. It’s hasn’t had so much of a speck of paint (thoughts) thrown onto it. It’s higher than a new car high—and I have a friend who really loves that new car high.

Waking up in the same body in some circumstance I’ve constructed, starting up again each day, picking up the proverbial hammer, and banging away. I watch it and the decisions it makes, interactions it takes. But now, I’ve formed a deeper relationship with who I am without the personality suit. For me, there is no deeper peace than taking off the suit. Similar to clearing out clutter in a room, it just leaves open space to be enjoyed without the impulse to immediately fill it up again.

Everyone has different ideas or thoughts about meditation, but for me, it is really an arrival into another dimension. I can’t say it is some kind of ultimate dimension and everyone needs to do it. All I know is that when I do this, it brings all the spinning molecules of myself, life, and the world as I know it to a necessary stop. Movement is the motion that we have all signed up for in this lifetime. All of our personality suits have signed up for movement, for contributing to movement.  Even in a coma, our atoms are moving, our blood is moving.

What happens for me is a calm that is calmer than calm. What happens from the calm is a woman who functions better in her personality suit. Senses more acute, molecules more balanced and aligned, mental attention span broadened. This sensation is so fulfilling, so energy giving, it has become the ultimate vacation destination available to visit throughout the day.

I have learned to do this sometimes with my eyes open and even in a chaotic environment. It’s the inconsistent environments that are often the toughest for me to focus. When I’m successful, what gets accessed is more beautiful than the most beautiful idea of paradise. The energy shift can be immediately felt and also shifts the appearance of my personality suit.

In Taoism, there is a term called Wu Wei which I learned about years ago in philosophy class. It really stood out for me because it is essentially non-doing or non-acting which can still cause an effect. My professor talked about how a bouncer at a bar is sometimes using Wu Wei—he is just standing there not doing anything, but his presence alone has an affect on those around him (or her).

This personality suit needs no caffeine and is not typically a coffee drinker. This morning it decided to experiment once again with social coffee drinking. As a result, it’s fingers are dancing upon this computer.  he keyboards are tapping, birds are chirping, a neighbor’s leaf blower is humming, and a plane is flying in the distance. The cool wind feels and smells of the end of summer. The eyes of the personality suit look around at existing projects, folders, gardens and overhanging trees.

There is no set requirement for living a peaceful life. For me and my personality suit, all life is an ongoing interactive experiment and adventure. It seems the people that are the most fulfilled are the one’s in whom there is less of a separation between the pure energy that they are and the vehicle they’ve chosen as a personality suit.

Happiness and fulfillment can be seen and felt regardless of one’s economic, relationship or health status. It’s that raw nakedness wearing only a small garment of a personality suit that can immediately be sensed. It’s consistent in some people, and inconsistent in others, but there it shines, like a color beyond the spectrum of what we’re used to witnessing.

It is a new day for me and my personality suit. It wants some food, it wants to feel a sense of tactical results, it wants to listen to music, think free thoughts, and get kisses from dogs. I’m going to let it have it’s day, but I’m also going to strip down as much as possible and get out of my personality suit and into the pure silence of non-creation.

How fascinating that non-creation can also ignite pure creativity. Like a metronome, speeded up or slowed down, this inward and outward motion, always ticking away, swinging back and forth to the music of life. Whether a few minutes, or several days, a journey away from the personality suit needs no suitcases. A true state of calm becomes an experience which comes with a great souvenir. 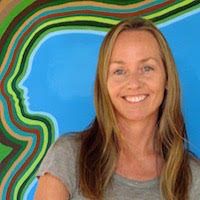