Was the Short-lived Black Dot Campaign a Good or Bad Move in the Fight Against Domestic Violence? 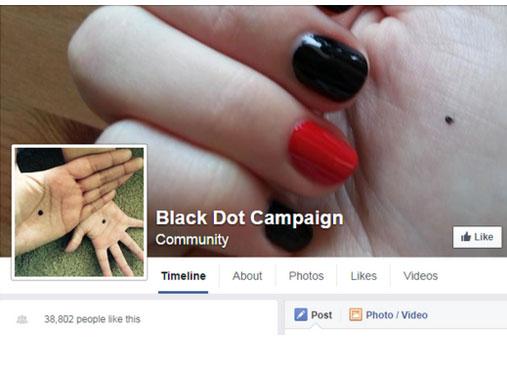 These days, with the help of social media, we can spread a new idea fairly quickly. It’s empowering. But it can also be dangerous.

Earlier this month a new campaign was launched on Facebook to help victims of domestic violence. But this week, the campaign page was removed amidst criticism that it could do as much harm as good.

The Black Dot Campaign, it seems, was well-intentioned but poorly thought out.

Established by an anonymous survivor of domestic abuse in the UK, the idea was for victims to draw a black dot in the center of their palm and show it to friends, relatives or professionals for the purpose of either starting a conversation on the topic, or actually seeking help to get out of their situation.

Launched on September 8th, it quickly garnered support and had over 40,000 followers when the campaign came to an abrupt end a few days ago.

The initial response from the general public was overwhelmingly supportive and the campaign went global. However, its viral success was also its nemesis—the “secret” sign, intended to be a cry for help, was no longer secret and could be recognized by abusers as a signal that their victim was trying to get out of their situation.

Many professional organisations in the UK and the US spoke out about their concerns and in recent days the Facebook and Twitter accounts associated with the campaign were disabled.

Although it did a great deal to raise awareness on the subject in a few short weeks, the campaign drew as much opposition as it did support.

What was the problem?

Essentially, the motivation behind the campaign appears to have been very unclear, and it was launched without consulting any professional organisations working in the field.

The woman who launched it explained her intent as follows:

“I imagined it as a tool to start face-to-face conversations between friends, or with professionals. I was basing it on my experiences and I was thinking, how could I prompt people to talk about domestic violence? A black dot is easy to make, and easy to erase. As a female, you could go to the toilet, draw one on with mascara, and then later wipe it out. Being in the centre of your palm, you could close your palm and hide it from view.”

However, despite claiming that by drawing a black dot on their hands victims could discretely alert professionals to their need for help, the black dot was not a recognized signal for anyone working in healthcare or support services. So, had the campaign not gone viral, the black dot would have been meaningless as a cry for help.

And the means by which it went viral was a request for others to show their support for domestic violence victims by posting a photo of a black dot on their hand. It was a selfie campaign with a social conscience.

But this awareness-raising strategy had the direct consequence of sabotaging the cry-for-help mechanism.

And while generating awareness and getting people talking about serious issues and breaking taboos are good outcomes, the dual aspect of the campaign muddied the waters and generated very real concerns for the safety of victims who may choose to use the black dot.

“Women who mark themselves with a black dot could unintentionally inform their abusive partner that they are trying to reach out and access support. This could have grave consequences—two women a week are killed in England and Wales by a current or former partner; 70% of domestic homicides occur at the point at which a woman separates from a man.”

In response to the criticisms, the campaign’s originator was defensive:

“When things go viral and worldwide, you kind of lose control. A lot of survivors are putting their dots on their hand, but that’s not what the original idea was.”

She called for supporters to switch from selfies with a black dot to selfies with “Say No to Domestic Violence” on their palms instead, while stating her hope that doctors, police and social workers would become more aware of what the black dot means and respond appropriately.

“This isn’t the solution that will help everyone, if anything it should help people realize what abuse is, how it affects people and how to access help.”

And indeed, given the viral success of the campaign, this is likely to happen. But the danger remains for those using the black dot to alert such professionals. Alice Stride of Women’s Aid in the UK commented that, given how difficult it can be for some victims to communicate their abuse to others, it’s good for women to have a range of options available to them. However, she also cautioned:

“In many situations, the perpetrators do monitor victims very closely. If there’s any noticeable change, for instance if they forget to wash the dot off their hand, that could lead to further abuse.”

Remembering that an abuser who is active online is likely aware of what the black dot signifies, victims are warned to be extremely cautious in their choice to use it.

Following are contact details for agencies offering assistance to those suffering domestic violence in the US: