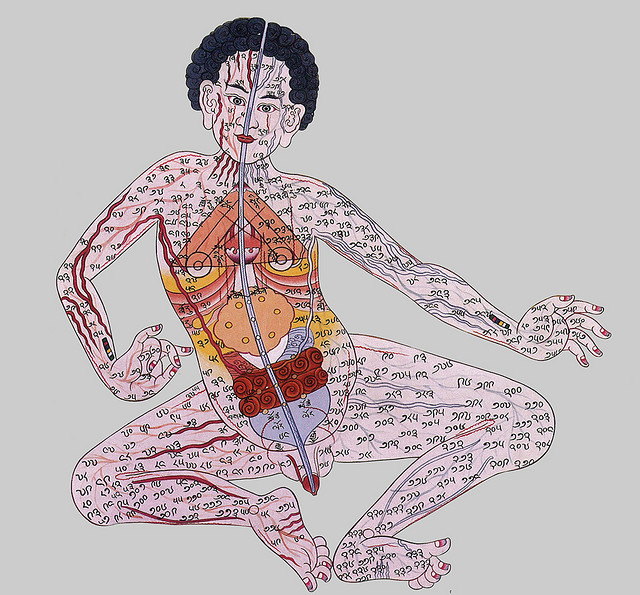 The Five Tibetan Rites is a rejuvenating practice that stimulates the chakras, enhancing the flow of natural life energy in the body. It was once a well-kept secret that is believed to have been a ritual that was practiced by monks so that they lived a long and vibrant healthy life.

Essentially, The Five Tibetan Rites are a 2,500 year-old exercise system that was first published in English in 1939 by Peter Kelder in The Eye of The Revelation. Kelder claimed that he met with a retired British colonel who told him of the discovery of the Rites and the book was based on these conversations.

The Five Rites are thought to be a form of Tibetan yoga that is similar to the yoga series that originated in India. The difference between the two is that Tibetan yoga involves continuous sequences of movement whereas Indian yoga focus on static positions.

When practiced daily the benefits are said to be: increased energy, a reduction in stress, toning of the body, an enhanced sense of calm, clarity of mind, balanced hormones, weight loss, sleeping soundly, improved strength, youthfulness, improved breathing, greater flexibility and overall improvement in health and well-being.

The whole routine only takes approximately 15 minutes and can be practiced anytime of the day or night, although usually sunrise or sunset is recommended. Due to the amount of energy they released it is advisable not to practice the Rites too late in the evening.

The sequence can be repeated two to three times per day and it is ideal for whenever there is limited time or space.

The routine can also be used as a warm up for a normal yoga session or any physical exercise.

The following movements should each be repeated between one and three times in the first week of practice. Over time build up the practice to eventually repeat each of the Rites at least 21 times.

Deeply inhale and exhale throughout the exercise.

Stand upright with arms outstretched and horizontal with the shoulders and fingers together with palms facing the floor.

With the feet slightly apart, spin around in a clockwise direction until slightly dizzy.

Keep the gaze at eye-level, focusing on the finger of the right hand if it is easier to maintain balance.

Inhale and raise the hands above the head and then bring them down until they meet palm-to-palm in the prayer position.

Exhale and lower the hands in prayer position to rest in front of the heart.

Keep breathing deeply when you stop spinning until any dizzy feelings subside.

Lie on the floor, face up, with the hands palm down by your sides. Fingers should be kept close together.
Inhale and keeping the legs straight, raise the head off the floor tucking the chin into the chest while raising the feet until the legs are high as possible, in a vertical position.

If possible extend the feet back over the body toward the head trying not to let the knees bend.

Hold for a moment or two and then exhale and slowly lower the feet to the floor.

Stand up and breathe deeply for a few moments allowing the muscles to relax.

Kneel on the floor,  keeping the body upright and legs together with the hips in line with the knees and hands by the sides. Keep the toes curled under throughout.

Inhale and press the hands into the thighs just under the buttocks to support the spine and lift the ribcage. Bring the shoulder blades together and arch the back leaning as far back as is comfortable. Allow the head to lean back as far as possible.

Then exhale and slowly come back to an upright kneeling position tucking the chin into the chest. Relax all muscles.

Benefits: Balances emotions and opens the heart and solar plexus.

Sitting upright with feet extended out in front of you and legs straight, press the back of knees into the mat, if possible.

Place the hands palm down on the mat with fingers together and pointing towards the feet.

Tuck the chin into the chest.

Inhale and gently raise the body, lifting the buttocks from the floor, bending the knees and keeping the arms straight so that you are in a tabletop position. The head should then gently fall backward so that it hangs backward as far as is comfortable without straining.

Exhale and relax the muscles coming back to a seated position tucking the head into the chest.

Benefits: Strengthens thighs and increases energy in the sacral area.

Begin on all fours with the hands on the floor shoulder width apart.

Feet should also be slightly apart with the toes curled under.

Inhale deeply and push the body upwards. Lifting the hips, rise up on the toes and hands as far as is comfortable.

With the back flat and head lowered create an inverted V.

Hold for a few moments then exhale, tuck the chin into the chest and lower the body to a plank position with the shoulders back.

Although it is called The Five Tibetan Rites there is a Sixth Rite that is included which is that of deep breathing.

Standing comfortably exhale and bend from the waist, placing the hands on the knees. Remove as much air from the lungs as you can, exhaling while returning to an upright position.

Benefits: Invigorating and stimulates all the chakras.

The Five Tibetan Rites all work in conjunction with one another so it is important that they are practiced as a sequence to gain maximum benefit.

The Rites should be performed on an empty stomach and, if possible, outdoors with nature.

As with all practices, the focus is on progression, not perfection, so always take it easy as the most important thing is that it should always feel comfortable, refreshing and offer harmony and renewed energy. It is not something that should ever be painful or cause any stress whatsoever.

One of the most important parts about Tibetan exercises is conscious and synchronized breathing when carrying out any physical movements.

This exercise will help to open the chakras and cleanse and thoroughly invigorate both body and mind.

Disclaimer: If there are any health concerns, please see a doctor for advice before carrying out any exercise.

The video may show very slight differences to technique, but overall the practice offers the same benefits:

10 Signs Your Energy Field & Chakras are Out of Whack.