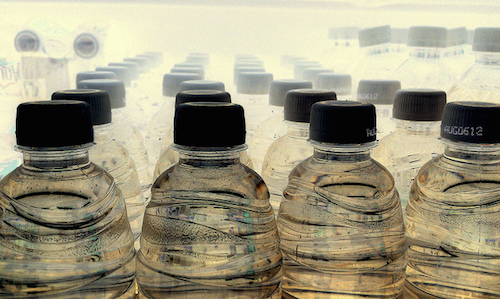 Environmental agencies are suing the U.S. Forest Service for allowing Nestlé to continue bottling operations on a 27-year-old expired permit.

For just $524 a year, paid to the U.S. Forest Service, Nestlé gets away with siphoning water from drought-stricken California in the San Bernadino Forest.

When asked if Nestlé would stop bottling California water, CEO Tim Brown replied, “Absolutely not. In fact, if I could increase it, I would.”  Coming from a company whose chairman Peter Brabeck-Letmathe sees clean drinking water as a privilege rather than a basic human right, this is not surprising.

As someone who has lived in California for the last four years, I have seen first hand the dwindling water lines and diminishing snowfalls each year. I’ve looked at countless sand pits that used to be lakes. I have watched as the bears come to town searching for food more and more often, because their natural sources in the woods around Mammoth are drying up faster and faster.

On Tuesday environmental agencies took a stand, suing the Forest Service for allowing the corporation to continue bottling on this expired permit, in these worsening conditions. The lawsuit claims that the U.S.F.S. has allowed Nestlé to illegally divert millions of gallons of water to continue bottling its Arrowhead brand of water. The plaintiffs—the Center for Biological Diversity, the Story of Stuff Project, and the Courage Campaign Institute—are calling on the Forest Service to shut down use of the pipeline and conduct an environmental review immediately

An investigation in March of this year showed that the permit to use a four mile pipeline from Strawberry Creek in the San Bernadino National Forest to the company’s bottling facility had expired in 1988. Only after that, a group of critics raised concerns in letters and after an inquiry about the expired permit, did Forest Service officials announce plans to take up the issue and carry out an environmental analysis.

Okay, forgive me, but I am pretty sure as a citizen, if I am walking around using a license or permit that is 27 years old, I am in trouble. I am at least getting a ticket and fine.

Not only has the Forest Service not reviewed the permit since, they also have not bothered to study the effects on the surrounding ecologic system. Basically that tells me that they can monitor rivers to ticket anyone who dares fish without a current fishing license (happened to me), but can’t monitor the effects of millions of gallons of water being diverted from the environment.

Of course some of this lack of oversight comes from the struggle of the agency against major cutbacks and budget deficits. Understood. But this means no one is watching what these guys are doing, no one is monitoring the wolf amongst the sheep. In a world where our individual rights are infringed upon more and more often by government watch, shouldn’t corporations be held to the same?

If Nestlé wants the water so badly, let them foot the bill for monitoring the environmental effects of their presence.

Nestlé believes that the company’s permit has not expired, since it it still being reviewed by the Forest Service. For 27 years? They also state that the amount of water used at the company’s five California bottling plants—about 1.9 million gallons per day—is not contributing to California’s drought. CEO Brown stated “To put that amount in perspective, this is roughly equal to the annual average watering needs of two California golf courses.”

And that doesn’t contribute to the drought either than, does it?

As a resident of California, I see this as good news. As we have watched our lakes dry up, our Ponderosa Pines and Sequoia Trees die off, and wildfires become a fact of life, we are held to more and more personal restrictions each year. Some homeowners revamp landscapes to desert friendly vegetation that requires less water. Many of us do our part by not buying bottled water, instead filling up reusable bottles.

Once green lawns go brown, and homeowners are fined for watering outside of specified windows.

For example, in Barton Flats dozens of cabin owners were told they could no longer draw water from Barton Creek; instead, they would have to use wells or install tanks and truck in water. These owners had been using the creek with water rights for 80 years. Cabin owners spent thousands of dollars putting in tanks.

In other words, watchdog David as Goliath gets away with murder.

As we take personal responsibility for our Earth, it’s time we hold agencies accountable to do their part/jobs as well.

12 Things you might want to read while sipping your Fiji bottled water.