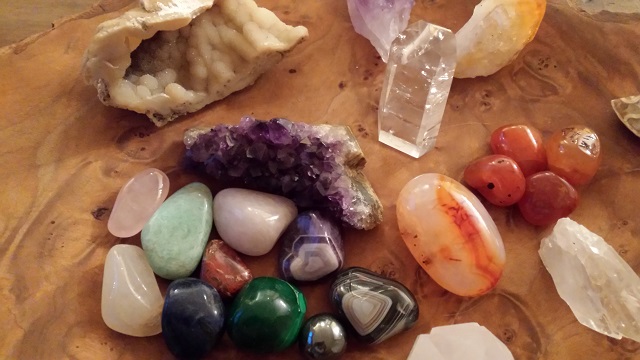 Scorpio, a fixed sign that likes to harness and organize energy, operates under the influence of Pluto—a mysterious heavenly body that causes irregularities in the orbits of other planets.

Not surprisingly, Scorpio is blamed for its own shenanigans among the other sun signs.

A water sign, Scorpio is a natural empath, with a secretive nature.

Representing sex, death and the Underworld, this sun sign is enigmatic, vulnerable, emotional, private and given to spiritual pursuits.

Often misunderstood, Scorpio is a deep, mysterious river that never fails to charm and lives with complete passion for the moment.

Other traits attributed to Scorpio include; transformation, loyalty and a desire to dispel taboos—often by indulging in those forbidden activities. We’re just never going to be too well behaved.

Because Scorpio rules the area of sex and the reproductive organs and concerns itself with emotions, those of us who fall under this sign often need support in our lower chakras.

In my every day as a solitary witch and a Scorpio, I have relied on certain crystals to find balance both physically and emotionally.

Traditionally, the two stones used by Scorpios are topaz and malachite. I have expanded the list to include other crystals and stones, as they pertain to the chakras.

The way I use crystals and stones is by adding them to my everyday life as much as possible and using them during healing rites such as Reiki, Meditation and Yoga Nidra.

In the every-day I carry crystals in my pocket as worry stones. Also, I wear them as needed or wanted in a ring, pendant or bracelet.

During meditation, I hold a stone, or if lying down, I place the stones in the area of the chakras I would like to balance, first drawing my attention to the stone I am working with. One can also surround themselves by a grid of stones when lying down for Yoga Nidra, at the crown, shoulders, hands and feet.

If using a grid, I recommend one stone at each point, such as all amethysts, or clear crystal points. It’s easier to tap into the energy of one stone than many at once when in deep relaxation.

When working at my computer, or if reading, I place a collection of crystals close by, and mentally check in with the crystals absorbing their energy and inspiration and run my hands across them as needed.

Here are some stones and crystals beneficial to Scorpio. But do not take this list as gospel, add in any that you are inherently drawn to. I find that intuition often leads us to the stone we need most.

Not all Scorpios resonate with these stones, depending on the influence of their North Node. Experiment with stones until you find the one that fits your soul. It’s not always necessary to follow traditional suggestions.

As Scorpios tend to be empaths, and are easy overwhelmed by people and situations, they can use black onyx, (centers, aligns with higher power), red jasper (grounding, adjusts negative situations) and smoky quartz (dissolves negative patterns in the aura) as healing and balancing stones.

Recently, a friend of mine arrived with a beautiful silver ring with a smoky quartz at the center. I was completely mesmerized by it, although I am not usually attracted to that stone. My friend, a fellow Scorpio, picked up on my fascination with it and gifted me the ring. It is now worn faithfully to any function where I stand a chance of feeling overwhelmed.

Pay attention to emotional and physical prompts from crystals and stones. When appropriate, I also leave crystals out on a full moon, to charge them. I have wee bits of tree roots that I have gathered and arrange them with the stones as a grounding influence.

I am, without fail, attracted to yellow stones and many of the rooms in our home are painted a deep, golden yellow. My Sacral chakra is in constant need of balancing. Not surprisingly, healing stones for this chakra include;

When I bring new crystals home, I have a little ritual. First, I wash them in warm water to clear energy that has been picked up at the store. Next, I attune to them, often carrying them around for an hour or so, adjusting to the stone’s energy, and allowing for the stone to adjust to me.

Sometimes, if I feel prompted, I will set it in with my other crystals and stones as they are already infused with my energy.

It’s just a nice way to honor the crystal’s energy and make it feel welcome.

The Solar Plexus is an important chakra for Scorpio to keep cleansed and balanced. Empathetic, emotional Scorpio slips into negative patterns when the Solar plexus is cluttered.

Because Scorpio is highly sensitive to energy, crystals and stones make for wonderful companions. They are a magical addition to the spiritual work Scorpios are known for. As intuitive as Scorpio is, crystals are more so, imparting insights to the mystic of the zodiac.

There is one more crystal that I have not spoken about, and that is clear quartz. Perhaps the most valuable tool in my magical practice, clear quartz is a powerful ally. It can take the place of any other crystal should you have a problem sourcing one. Simply intend it to be what you need and faithful, magical quartz will do the work required.

I never cease to be amazed by the beauty and generosity of crystals and stones. I hope you discover the same.