Hurts So Good: Why We Keep Doing Those F*cked Up Things. 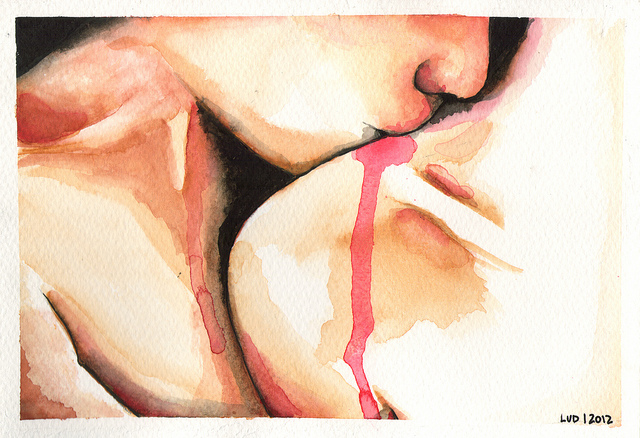 “Why everything that supposed to be bad, make me feel so good?” ~ Kanye West, “Addiction”

While I’m not a big fan of Kanye, his lyrics have been on my mind a lot lately as I watch people around me—and sometimes even myself—do some fucked up shit.

We know it’s bad for us, but in the moment, it feels so good that we forge ahead with it.

Why do we participate in unhealthy activities when we know they do more harm than good? Why do we stay in unhealthy relationships with people when they’re causing us more misery than happiness?

Why do we do things we know just know are morally wrong?

The human psyche is so complex. We can sit around talking about how the things we’re doing are completely fucked up… or that we know they aren’t good for us… or complain how much we want to “stop”, but we just can’t seem to prevent ourselves from doing them.

Let’s be honest… if we sit and think about it, we can probably all recall at least one thing we’re engaging in right now that is just plain wrong or not good for us.

We’re partying so hard, we can’t remember how we got home last night.

We’re continuing to smoke a pack of cigarettes a day, even though one of our parents died of cancer.

We’re sleeping with someone we know is all wrong for us and is pretty certainly going to take us for a ride on the Express Train to Heartache Central, but we can’t seem to keep our pants on when in their seductive presence.

Or maybe we’re once again in debt, because the first 10 times we had to call a friend or family member to bail us out wasn’t enough to deter us from racking up those credit cards again.

Now, we all know that to err is human, but at what point do bad decisions and unhealthy habits serve us when they become harmful to our bodies, souls and minds? Why do we continue to partake in the “bad” when we know why and how something hurts us?

There are lots of reason we do them, really. I personally like to think it’s because we’re human and part of being human is making mistakes and learning from them. But there comes a point where we’ve made this mistake before, yet we keep repeating it over and over again.

So what are the reasons we keep embracing the “bad” in favor of the “good”?

Sleeping with somebody whose name we don’t even know, that 4th glass of wine, those kick-ass pair of shoes we can’t afford but just have to have, flirting with a co-worker we know is married…seduction is powerful. Every part of us knows we should just say no, but we say “yes,” over and over again. The reality is, the only way to not be seduced is to just simply say no and stick with it.

It takes gumption. It takes a strong will. And it takes just a tiny bit of foresight to think ahead of the consequences before we do it.

It’s not easy. But it’s the only way…they don’t call it “being seduced” for nothing.

Who knew peer pressure wouldn’t become a thing of the past once we graduated high school or college?

But we still feel it. The pressure to keep up with our colleagues and friends. To have what everybody else has…or to at least go after it.

We all want to fit in. Sometimes, this leads us to make bad decisions that we may or may not pay for later. Regardless, peer pressure is no joke and its influence can sway us to partake in things we know aren’t healthy for us.

Some of us are just conditioned to think or behave in certain ways. If we grew up in a household where our parents spent money endlessly on things they couldn’t afford and never put any limitations on anything, that’s all we know. So we go out into the world doing the same thing.

If we grew up in a culture or environment where drinking and screwing everything in sight was acceptable behavior, (and in some cultures, it is)…of course we’re going to engage in the same behavior. Even though we’ve seen what the consequences are, we can’t help ourselves. It’s all we know so it’s what we do.

Although these things may have been perfectly okay in the environment that you grew up in, you need to ask yourself, are you okay with this behavior in yourself? No judgment here—this is just a question you need to ask.

We have to walk down the path that we know feels good in the long run.

We all do this. We know we have a problem or continue to make bad decisions but it’s embarrassing to admit to anyone we think we may have a problem. So we stay in denial about it.

We can only deny the things we’re doing for so long until we start to recognize that our behavior is unhealthy and affecting others. How do your actions affect you and those around you? It’s important to be honest with yourself when your behavior is getting out of hand and is hurting not just others, but yourself.

Feeling good about ourselves is key to leading a fulfilling and happy life so sometimes, no matter how hard it is, we have to own the things we’re doing and make some difficult changes.

You simply can’t deny it. Sometimes, bad just feels so good. We’ve all been there. Your ex sends you a sexy text that he/she misses you with some other suggestive words, and you become weak in the knees. You know you shouldn’t, but said text is very, very hot…so why not?

What’s another raucous night out with friends getting drunk and stoned even though after the last incident you woke up puking your brains out and unable to go to work? Or better yet, you lost your pants somewhere between the bar and some girl’s bed whose name you can’t remember.

Sometimes, things just feel good when you’re in the moment. It isn’t until you’re paying the consequences later on that you begin to have doubts.

All things considered, doing bad things teach us what doesn’t work for us, and are usually the catalyst that force us to get our shit together.

And at the end of the day, we’re all human. So we’re sometimes going to do things that are questionable. The key is to recognize why we’re doing them and to make some progress towards heading down a healthier path, physically, emotionally and spiritually.

Because that temporary feeling of “good” is eventually going to feel bad.

And we deserve better.