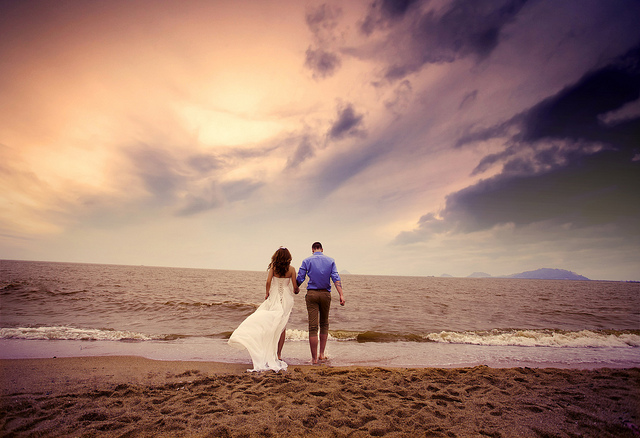 To everyone who’s on the verge of tying the knot, I promise to never ask you—after it’s all said and done—any variation of the question: “How’s married life?”

Not just because small-talk questions like that make someone as introverted as me awkwardly stumble through my words as I try to come up with a semi-coherent and relevant response, but also because it’s, frankly, kind of a dumb question.

I cried the night before my wedding. It was 11 p.m. and I was sitting in the freshly-decorated Elmwood Park Pavilion (where our reception was to be held the following evening), surrounded by meticulously hung twinkling lights, glimpses of our personalities in the table décor, bright and inviting yellow and white paper lanterns dangling from the ceiling beams and the anxious anticipation of one of the biggest days of my life on the horizon. Our families and wedding party had just left, and my fiance, Matt, was picking something up at the store, leaving me with nothing more than my thoughts and solitude. The stage was set for an elated bride-to-be, but it just wasn’t there for me.

The truth was, I was terrified of how the dynamics of my relationship with Matt were going to change. I loved us, and I loved the life we were living together. Would marriage change everything? I wasn’t sure. There were already glimpses of forks in the road we were bound to run into—mundane, logistical things like whose insurance plan we’d use, how we’d manage our finances, changing my last name, balancing our lives with our family and friends, maintaining priorities, etc.—the kind of stuff that makes people squirm and has been known to tear couples apart.

So when my anxious brain woke me up two hours too early at 5:30 on the morning of my wedding, I wasn’t giddy with excitement, but rather, I was bracing myself for the loss of a life I had grown to love and for “everything to change,” as everyone ominously alluded to every time the wedding and marriage came up in conversation. As I reflect on those terribly unhelpful words of advice from our friends and family, I have to laugh. If I didn’t know how wonderful they are, I’d conclude that they were all terrible people.

Eventually, the bleak feeling of despondency was replaced with the sound of my alarm going off when it was originally scheduled to. And then, I was moving, trying to keep up with a meticulously laid out itinerary; delivering my carefully thought out vows with a steady voice (but shaky hands); gingerly shoving cake into Matt’s mouth (and silently plotting my revenge if he chose not to follow suit); silently sneaking away to reapply deodorant; realizing how “Daughters” by John Mayer is far too long to dance to with dad when a bajillion people are watching; tossing the bouquet and secretly hoping my maid of honor, Liz, catches it; excitedly looking over at Matt and realizing, “Holy crap, that’s my husband;” getting roped into conversations and laughter as we’re trying to say our goodbyes—you know how the whole wedding thing goes.

Before I knew it, I found myself lying awake once again, but this time in a foreign bed at the Magnolia Hotel next to Matt, rolling on a high after having just experienced the most impeccably perfect, beautifully memorable day of my life.

I had just gotten married.

Now is when you alert the National Guard, my friends, because I’m about to reveal the most shocking truth on what changes after marriage…

Well, I can’t say nothing, exactly, because that wouldn’t be entirely true—my last name has changed, our beneficiaries have changed and the name on all my ID cards has changed (unfortunately, the photos are just as bad as the previous ones—those remained equally terrible). But other than that, nothing has changed.

Matt still leaves a bag of cereal on the counter for me to take to work every morning, and I still curl into him every night after crawling under our cold, untouched covers. He still doesn’t understand why I need to vacuum every day, and I still get annoyed with him for letting our dog track muddy prints into the kitchen. And together, we still eat ourselves like true gluttons at dinner and then decide to make ourselves feel infinitely worse by getting ice cream as soon as we leave the restaurant.

I truly don’t think marriage changes anything from the way life was before. Instead, it launches a domino effect on things that are going to change eventually—huge milestones that you end up meeting together, like having kids, changing jobs or buying a new house. For us, we’ve started down that path already, hitting our first milestone of canceling cable. Oh, my god. I’m still unsure about it. (And only kind of kidding about the gravity of it all.)

To anyone who dares to ask me, “How’s married life?” in the future, I’ve perfected a foolproof response to limit any further discussion. Instead of humoring them with an equally lame, nondescript response, I now choose to respond with, “Pretty much the same as an in-a-relationship-and-living-in-sin life.”

The Marriage of Soul & Ego (A Bit of a Pickle) 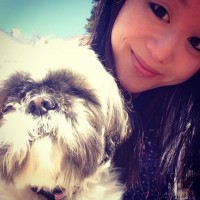