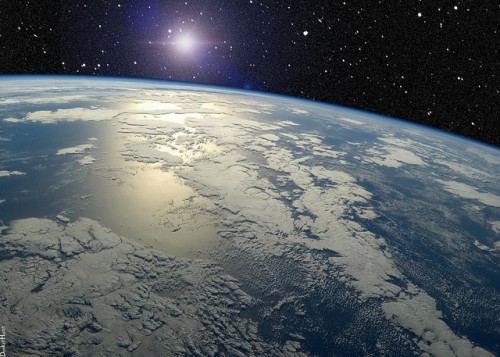 “One of the basic rules of the universe is that nothing is perfect. Perfection simply doesn’t exist…..Without imperfection, neither you nor I would exist.” ~ Stephen Hawking

The Solar System is a mind-blowing place to monitor and a hive of constant activity. There is always something phenomenal happening within it and this weekend it is about to present us with another exciting and intriguing event.

Following prophecies last week that predicted mass devastation and destruction around the Blood Moon, we have just been alerted to the news that a huge asteroid is about to pass extremely close to Earth.

NASA has rocked the Internet over the last few hours by describing the encounter as a “near Earth event” with the asteroid being 15.5 million miles away. Although in astronomical terms it will be a close encounter, it’s not likely to impact our planet.

A massive asteroid measuring two miles long will hurtle past earth at approximately 40,000 miles per hour. The size of the asteroid was measured by the strength of its brightness.

It is only likely to hit Earth if another object collides with the asteroid, altering its course—it is not thought that this is even a slight possibility. Hypothetically speaking, if the asteroid and Earth did collide it has the potential to kill approximately 1.5 billion people and also destroy the ozone layer.

The asteroid, known as 86666 (2000 FL10), was originally spotted 16 years ago, although NASA only gave two days notice that it was about to pass so close.

The names asteroids are given derive from when they were first spotted. So this asteroid was first noticed in the year 2000 and the following letters and numbers are also codes to its initial discovery. The long number is an indication of how many asteroids have been found before this one.

Asteroids are known as minor planets and the translation for the word “planet” means wanderer. There are billions of these cosmic wanderers floating around the solar system. They are thought to be objects that never made it as planets when the Solar System formed approximately 4.6 billion years ago, and most of them now orbit our Sun.

If an asteroid is on course for collision with Earth it is then known as a meteoroid. If a meteoroid enters the Earth’s atmosphere it will burn up and this is what is seen from Earth as a shooting star. Astronomers will be keeping close watch, as according to NASA it is one of the biggest lumps of rock to skim past Earth in recent times.

The huge rock will safely hurtle past the Moon’s orbit of Earth without any danger of impact, according to NASA reports.

The orbits of the asteroid and Earth have been coinciding since early September and will continue to do so until the middle of November. However, Saturday 10th October and for the next few days is when they reach their closest points.

Unless, of course there are others out there that NASA are aware of. And if there are others hopefully we will have more than just a couple of days notice so we can prepare the best possible scenario to witness it.

It is believed that it may be possible to witness the passing of the asteroid with the use of a standard telescope so it is definitely worth monitoring it’s route and taking the opportunity to get a glimpse as it speeds past us.

Asteroids aren’t always easy to see, although, it is believed that it is possible to witness the passing of this asteroid with the use of a standard telescope and by following basic instructions.

This is a rare chance to view an asteroid of this size and passing so close by, so it is definitely worth monitoring the route and taking an opportunity to glimpse it as it speeds past us.

NASA experts are monitoring the asteroid as it nears Earth.

Click to watch the animated illustration of the asteroid’s trajectory in space in relation to Earth.

Anytime something special is happening in the skies, it is the perfect chance to take us away from our day to day world here on Earth and marvel at what else is happening around us. We often get lost in the inner wheel of the world we live in and forget we are part of something quite magical and so much of it is visible to the eye, with just a little patience and a small amount of know-how.

So many times I have taken myself away from the busyness of my day to absorb in what’s happening in the skies and have spent hours lying out on the grass just looking up to the night and marvelling at the universe surrounding me.

It reminds me that just as what is out there is limitless, so too are we. For me, there is nothing more nourishing than connecting with the vast outer world that we all often forget is where we all originated. Sometimes I have even missed the astronomical event I set out to watch through sheer marvel and wonder at everything else that is twinkling and catching my attention to alert me that despite whatever it is I am going through, the universe is always there to remind me that there is more, much more than what actually meets the eye.