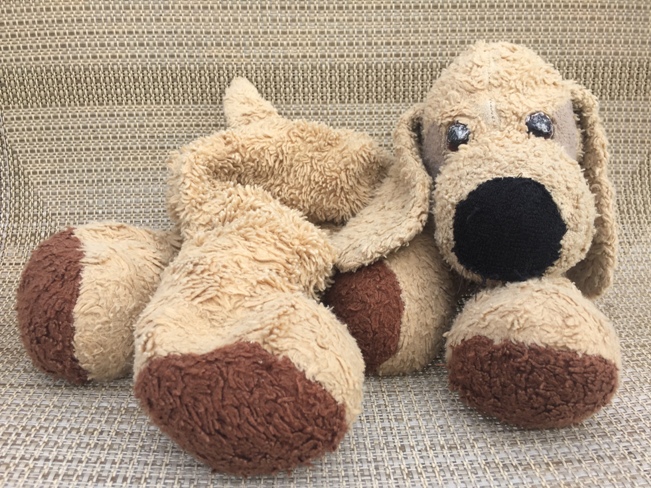 Six months after my wedding, business landed me in Munich, Germany.

One evening while strolling through the main town square, Karlsplatz, I came across a brightly lit store filled with fluffy stuffed animals. Lured in by a childlike desire to indulge my sense of touch, I meandered through the store for almost an hour.

I found myself dreaming of children, something my new husband and I wanted dearly but weren’t quite ready for yet.

It was in the midst of my daydream that I saw the dog. My eyes widened and my heart softened. This wasn’t just any old stuffed dog. This was the cutest, softest brown puppy I had ever seen. Immediately, I knew that our future child would someday cherish this dog.

It was settled. The dog would come home with me to San Francisco.

Years passed, and Coco, as the cute brown dog eventually came to be known, was loved, cherished, snuggled and kissed by our son Kalen until his fur wore down to nubs. His stuffing moved into his paws, he lost his original nose, and he required patches on the sides of each eye.

Kalen is now eight years old, and although many other stuffed animals have since joined his ever-expanding crew of “friends,” Coco holds a place of honor.

Stuffed animals have an almost hypnotic effect on my son. His relationship with them has always intrigued me, but once I began teaching conscious movement to kids, I learned that stuffed animals have this effect on most children. One day while searching for a creative way to engage kids in class, I filled a laundry sack with various stuffed animals from Kalen’s collection. I planned to have kids reach in and grab an animal, and then we would learn the corresponding movement or pose for that animal. I figured it would be a modestly enjoyable activity that would cater mainly to my youngest students.

Let’s just say I missed the mark on that assessment. Far from being just “moderately enjoyable,” this quickly became a favorite activity of all of my classes.

It wasn’t just the youngest students who found enjoyment in this activity, either. Kids through fifth grade would come into class excitedly asking, “Did you bring the animal sack today?” Even the older boys, many of whom were already developing the dreaded adolescent air of indifference, would soften their edges around the stuffed animals. Sometimes I’d even catch one of them secretly cuddling their pick from the sack.

Intrigued by the children’s response to the animal sack, I began to search for other ways to weave stuffed animals into class. Experiencing challenges getting kids to settle in relaxation pose at the end of class, I decided to see if the animals could help.

Usually it’s a chore for me to get a group of kids to lie down quietly for even ten seconds, but with the animals as props there wouldn’t be a sound in the room for at least a minute. Progress.

Class after class, my experience with stuffed animals and children has been similar. Stuffed animals—almost without exception—expose the softer, gentler side of the kids.

I was itching to explore this connection and knew someone who could help me. It was time to pay a visit to my wise old friend, Coco.

I didn’t have to go far to find him. He was sitting in his usual spot at the back of Kalen’s bed. He seemed relaxed and at ease, his scratched up black eyes revealing a constant state of peaceful alertness. I picked up the old dog and gave him a knowing smile. I carried him into the family room, and we sat together on the sofa. I knew that he held wisdom that could help me to understand the connection between stuffed animals and children.

Little did I know that he also held so much wisdom on parenting—wisdom that I will share with you now.

When I asked Coco to enlighten me on the sweet connection between stuffed animals and children, this is what he said:

“I’ve never actually said one word to Kalen, yet we’re best friends. Sometimes, it isn’t what you say; it’s what you don’t say. Listen attentively, but know that you’re not expected to solve everything. Occasionally, hold back your opinion, even when you really want to offer it. Children want to be heard. Sometimes they just need to cuddle in silence. If you’re truly listening, you’ll know what the situation requires.”

The Eyes Say It All.

“Children know your true intention by the look in your eyes. I, like other stuffed animals, have gentle eyes. No matter the situation, my eyes are soft and attentive—an outward reflection of my serene and loving interior. Kalen knows when you’re holding back difficult emotion from him. He knows by your eyes. Do you remember the other night when he spontaneously asked you to kiss him after declaring firmly he no longer liked or would be accepting kisses? It was because of your eyes. My advice to you is to remember the feeling that produced the look in your eyes that evening and come back to it more often in your interactions with him. Maybe you’ll get more kisses.”

“Children sense that they are vulnerable. This vulnerability helps them to be compassionate and thoughtful caretakers of others. The compassion of children is bountiful, and it is the reason you witnessed even the older boys caring delicately for their little animal friends. Give children ample opportunities to care for things—even small things like stuffed animals—and they will hopefully keep their sense of compassion as they grow.”

Don’t Underestimate the Power of a Snuggle.

“Sometimes it just feels nice to snuggle something soft and furry. That’s all I have to say about that.”

Learn to Just Be.

“Kat, I know that you would do anything for Kalen. You are quite adept at doing; in fact, you always seem to be doing something in this house. There’s hardly a moment’s rest. But oftentimes Kalen just wants you to be with him. Instead of hurrying to the next activity or chore, slow down and just be with him. Resist the urge to look at the clock or check your phone. Kids really need this. They need you to be truly present. Being present is an area where stuffed animals excel. We know how to be present with a child. We should actually be called stuffed beings. Kids love us so much because they can feel that there is no place we’d rather be than with them, and we are quite skilled at just being there.”

These are the simple lessons of an old stuffed dog. 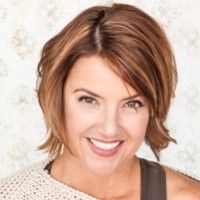