Cathartic Power of Art: Motherhood as a Rite of Passage. {Photos, Nudity}

I became an artist when I became a mother.

When my first son was born with a severe neurological condition, I saw all my certainties crash around me. It was then that I took up photography as a way of coping with the pain and stress I was going through.

Soon it became much more than that—it became a way to reaffirm my son’s beauty and presence in spite of his challenges, and as time went by, a way to share my experiences of motherhood and speak out on the issues I encountered. Now I have two more children who also form an integral part of my artistic practice.

As a mother I have experienced the absurdities and unfairness of a society which on the one hand idealizes maternity, but on the other hand belittles and turns its back on the needs and care which arise from the mother-child relationship.

Our society doesn’t integrate life with all its implications, into the system. Instead we are forced to hand over to others our responsibilities in order to be visible to the labour market. If we decide not to, we might be seen as invalid in our professional, social and economic lives. Nonetheless, by stepping out of the labour market and its suffocating demands, we can also regain an alternative freedom and knowledge that may inspire us to work towards expanding our intrinsic human and creative potential.

There is a manipulative and deliberate lack of information that hinders the understanding of just how empowering and transformative motherhood and childbirth can be. With my artwork I want to contribute to the expansion of the limited and constrained social imagery regarding motherhood, parenting, vital cycles and ageing that now exists.

My recent photographic series, Las Cuatro Estaciones (The Four Seasons, 2013-2014), reflects on different facets of my experience of motherhood.

Annunciation is a self-portrait with my eldest son in which I portray unconditional love. Inspired by Michelangelo’s La Pietà, it represents a bittersweet love that can inspire and devastate while we commit to accompany the destiny of another human being.

Shadow is a self-portrait with my daughter which represents the protective side of motherhood—I portray myself as the mother wolf who ferociously defends her young from the dangers of the world while imposing on them fear and restrictions for their own good. It was inspired by a conversation with a close friend who was suggesting my daughter could ride her bike alone in the countryside and I was insisting that I could not allow her to do it by herself. Being aware of my own fears, having to come to terms with the freedom I would like to guarantee while at the same time feeling obliged to either repress or put her at risk, triggered this image in my mind. 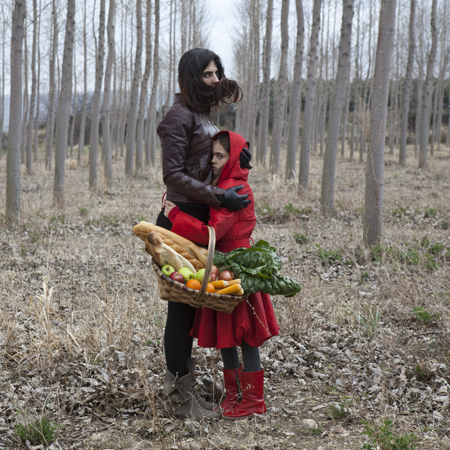 Assent is a reflection taken a few years after a late gestational loss and is about trust and letting go—-detaching oneself from expectations, wishes, and demands. I treasure that experience and the sense of calm, faith and reconnection with an innate wisdom that it gave me. 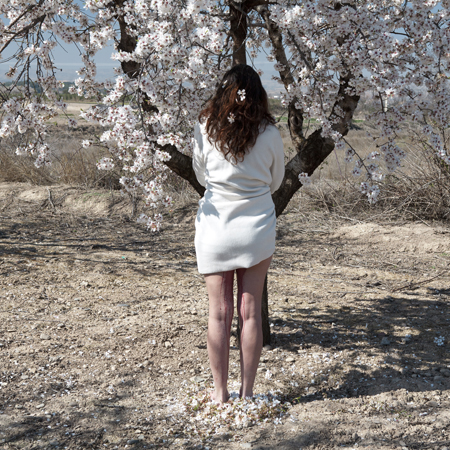 And finally, Symbiosis talks about relationships that nourish each other. It challenges the idea of a negated mother who will also negate her body and her presence to her children, so they will all ultimately conform to our unattended, unloved, and unnourished society. Symbiosis is not about being a “supermom,” it is about two complete beings that strengthen each other by the relationship they establish. That is where the mutual empowerment resides. 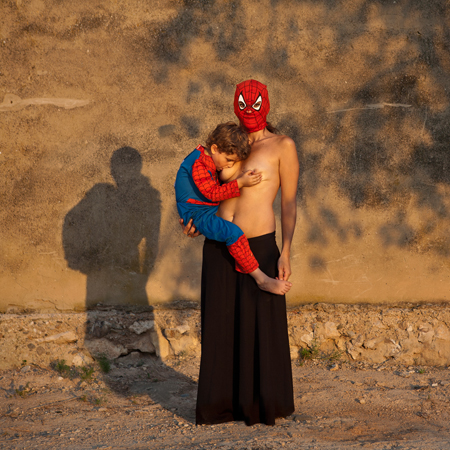 I am conscious that my photographs are just one more experience, and they do not convey an absolute truth. But this is exactly what I feel is urgent: we must all share each experience, through art or by honestly talking to our mothers, grandmothers, friends, partners and children, to counteract the unilateral version of sugarcoated and system controlled maternities. If we are completely moulded by stories that infuse fear and lead to subordination towards institutions and submissiveness to protocols of control, we are annulled to enjoy and be transformed by the power of our own experience.

Last year I was selected as a speaker for the EYECatalunya project, an initiative which  selects three creators of different disciplines each month to speak about their work and encourage a discussion around it. In a presentation entitled The Body’s Revolution (see below) I speak about some of my other projects as well as sharing some background on my artistic career—how I started photographing in Barcelona, how my work has developed since then, and what are the motivations and driving forces behind it.

I believe in the cathartic power of art. In its ability to influence thought, provoke dialogue, and question all facets of existence.

Art has the power to translate a painful experience into something that has a positive impact on the collective unconscious, the power to be a tool for change.

“Cesarean, Beyond the Wound” & Other Life Images. {Nudity & Childbirth}