El Nino’s Not the Only Thing Behind This Year’s Wacky Weather. 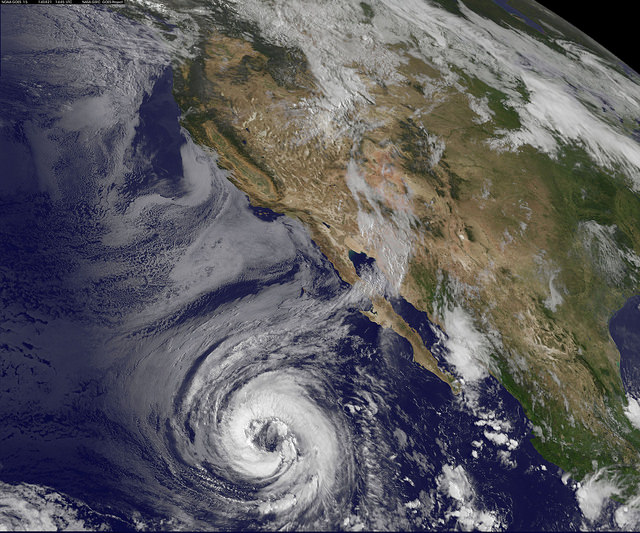 Like the host of a parasitic virus, the Earth is more and more showing the effects of humanity upon her.

I’ve seen with my own eyes the effects of 2015’s crazy weather up and down the West Coast and all around the Pacific Ocean: burned forests, coastal flooding, dried up lakes and rivers and extreme temperatures dotted our tour of the US this September.

Like any good mystery we can sit around for hours debating exactly whom and what the leading suspects are in the extreme changes in our weather patterns. Much like Laurel and Hardey’s “Who’s on First” skit, our heads can be left spinning after considering all of the usual suspects, plus a few new players in the game.

2015 is shaping up to be the warmest year ever recorded and the Pacific Ocean is ground zero for affecting Earth’s weather. Being the Earth’s largest ocean, the Pacific is a key player in the weather on Earth.

Having just sailed a portion of the Pacific from the warm, tropical waters of Fiji down to the cold, angry Southern Pacific Ocean around New Zealand, I spent two straight weeks observing this magnificent body of water and experiencing firsthand just how unpredictable the weather can be. Unfavorable winds that just couldn’t be predicted, squalls, and inconsistent low pressure systems one after another plagued us while the weather did what it wanted instead of anything close to predictions.

Just recently Hurricane Patricia slammed the western coast of Mexico, massively strengthening just before making landfall, which no one saw coming. Hurricanes are fuelled by warmer water temperatures while colder water temperatures suck the power out of them. Patricia formed overnight into a category 1 hurricane (75-95 mph winds) and within 24-hours turned into a category 5 storm (157 mph or higher), the highest ranking a hurricane can receive.

It’s unusual for a storm to multiply in strength so quickly and now researchers and experts are wondering exactly what combination of factors contributed to this. The NY Times likened it to a “game of Clue, trying to get all the right players together for the right ending.” The extreme El Niño’s warmer ocean temperatures could be to blame. So could the overall warming trend of Earth’s temperatures (aka climate change, global warming, or whatever they are refusing to call it in Florida nowadays).

Maybe it’s all the radiation from Fukushima—we can only speculate.

But we also have a new player in the game: Enter “The Blob”—a pesky circular zone of unusually warm waters sitting off the coast of western North America that does not seem to want to disperse. The sea surface temperature anomalies became greater than 3.6 degrees F by late winter. That may not seem very impressive, but for the region it’s actually without precedent in the historical record. This blob of persistent warm water has been affecting weather all year.

The northwestern US has seen unusually warm and dry temperatures, extreme droughts and wildfires, while the northeast experienced a very cold and snowy winter. This years El Niño is also getting credit for Australia’s drought and Indonesia’s peat fires.

That’s how powerful the Pacific’s weather patterns are.

The warmer waters are also effecting marine life, as the waters are nutrient poor, thus driving species out of their usual habitats in search for food, such as tropical fish in Alaskan waters and emaciated baby seals on California’s coats. Also the warmer temperatures in The Blob are linked to algal blooms that are rendering shellfish toxic in the Pacific northwest. Bacteria love warm temperatures.

Another heavy hitter is the Pacific decadal oscillation—a long period of relatively cooler or warmer water, which at times can last decades. For the last 15 years, it has been in a cool state, which many climate scientists say “has allowed the ocean to soak up a great deal of the heat generated by greenhouse gases as part of climate change.” This has been a tool used by those denying climate change. Now this phenomena is shifting to a warming phase, which is often nudged into effect by an El Niño.

Any number of combinations of factors from these patterns and phenomena can be affecting the weather changes we see day to day, and the strength and unpredictability of our weather patterns. Finding the exact combination causing any one shift is a job I leave to the experts, but one thing we can’t deny is that they point to one thing—climate change.

During my time in the south Pacific I saw firsthand one event linked to the combination of The Blob, El Niño and the oscillation—the world’s largest global coral bleaching event. This is the third time in recorded history this has occurred and the NOAA has said, it’s “the absolute worst they have ever seen.” I was astonished by the amount of dead coral washing up in Fiji and New Zealand as the beaches were covered with coral parts. Severe bleaching leads to death of coral thus affecting the overall health of reefs, and jeopardizing the reefs as a whole, which is devastating to the marine ecology system.

While we might not figure out exactly what combination is serving up the extreme shifts we are seeing,one thing is for sure: the weather patterns are changing and this can be a much needed wake up call to those in a position to enact change before the Earth rids itself of the virus of humanity herself.

Hottest September of All Time: The Very Real Threat of Climate Change.

What Extreme Winter Weather Tells us About Climate Change.