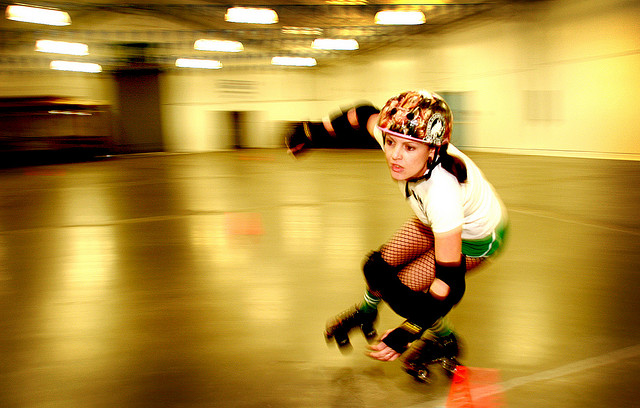 Roller Derby changed my life—and I’m not just talking about all the new bruises.

I started roller derby at particularly difficult time in my life—a time of uncertainty, depression, heartbreak—an all around funk. It was a time when it was difficult for me to laugh and even harder to smile.

My daughter’s best friend had just finished a week of Roller Derby camp with the L.A. Derby Dolls, and at the culmination of it all was her very first bout (derby speak—for a game or match). Watching these 7 to 12-year-old girls skate their little hearts out—most of whom had only been skating for a week—was incredibly inspiring. And I thought, “I want to do that!”

A month later, I signed up for my first class in “Derby Por Vida,” a class designed for adults looking to become future derby dolls—or at the very least try it out. The basics of derby go a little like this—there are two teams of five players each. Of the five players, one is a jammer, and the remaining four are blockers. The blockers’ objective is to block the opposite team’s jammer, while simultaneously helping their jammer through the line. Essentially both teams are playing offense and defense concurrently. The jammer’s objective is to get through the pack and score points. The team with the most points wins. There are definitely more elements to derby but that‘s the gist of it.

On my first day, I was nervous, but excited. I was certainly not looking forward to falling on my ass as much as I did! But thanks to the extra padding my momma gave me, I’ve managed to avoid any serious damage—so far. Besides the sore butt-cheeks, one of the first things I noticed was how diverse this group of women was. The women ranged from 18-45 years old. They came in all sizes and colors—something, that as a sociologist and a woman of color, I can’t help but notice. But the best part is the sisterhood and community-feeling of it all. For a lot of us there, it was our first time meeting each other—yet, by the second week, it felt like genuine connections were being made.

As a female, I can attest to the cattiness I’ve experienced from women throughout my life. At times, I almost expect it, but there was none of that here—zero. Instead, women who clearly had more experience skating were cheering us newbies on, helping us up off the floor and literally holding our hands.

Again, I need to reiterate that this was at a point in my life where I totally needed that, in more ways than one—and here, perfect strangers were the ones giving it to me. Although none of them knew what was going in in my life at the time, the kindness and compassion they offered me, through this sport, helped get me though some of the tough times. And I am so grateful to them for that. Derby offered a respite to the chaos and uncertainty in my life off the track.

In a way, Roller Derby is a form of therapy. While on the track we get to focus on aspects of ourselves, that off the track we tend to avoid. Mostly this aspect is fear. Fear of trying new things and failing, fear of getting hurt physically and emotionally, fear of not being accepted and the fear of not being good enough. We are not alone in these fears—and these fears can and do go beyond the track.

Yet on the track, these are fears we want to squash—fears we want to kick to the curb, and this goal connects us to one another, because we can see it in each other’s eyes. We’re scared, but we’re all in it together. The women who are better at derby recognize it also, because they were there at one point too. They are not only seasoned and skilled athletes, but these women are the first ones to help us up, and they’re the first to applaud our successes. They are also the ones who remind us that they were once where we are today.

Roller Derby is a physical sport—make no mistake.

During the fourth week, one of the other newbies fell and broke her leg. It was my worst fear realized. This could easily have been anyone of us—crying for our pain, our ego and our failures. The next week, she was back at the track, with a cast on her leg, happily cheering on her daughter who was in the junior league. We asked her when she’d be back on the track, and she said just as soon as she gets the cast off. She fell, she broke her leg, but she’s not quitting—that’s the spirit of derby!

If we fall, we dust ourselves off, and get back up as quickly as we can. If we break a leg, we allow it to heal, and then get back in the game.

Failure and pain are things we try hard to avoid—and that’s usually what holds us back from trying new things. But failure and pain are the very things that transform us, and reaffirm our sense of self. Derby not only offers a place where we can disconnect from our problems, but it’s also a place to reconnect with ourselves—to regain confidence in our abilities and confidence in ourselves. Knowing that there are others here, who are just as scared but just as crazy, makes us feel less alone.

The women I’ve met at derby practice are exceptional reminders of the strength and fortitude capable in all women.

I can’t wait until all of us newbies move onto the next level of training, eventually a team and on to the day that we can be the ones helping out the newbies.  Derby teaches us to approach fear as jammers—to break through that wall of blockers, even though they are trying their hardest to knock us down. It reminds us that help is there—in the form of other women.

And if we do happen to fall flat on our asses—getting back up and back in the game is essential, if we want to win one for the team. 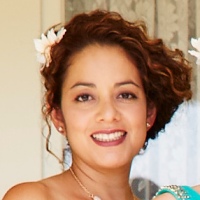