The Mad Tea Party: Ayahuasca with a French Shaman. 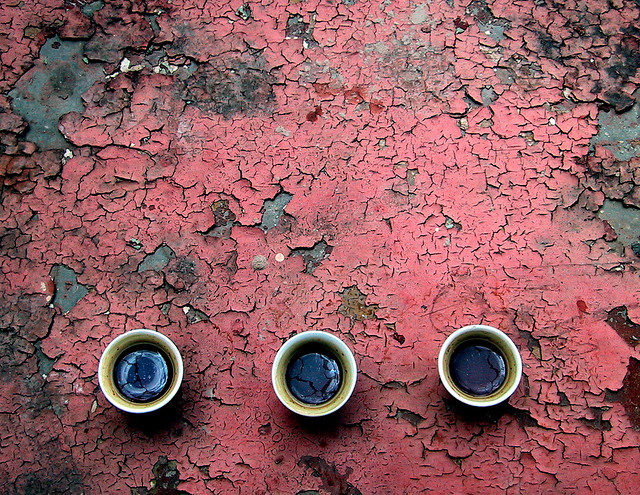 I was invited to a top-secret plant medicine ceremony in early November. I had been wanting to experiment with Ayahuasca, the hallucinogenic tea derived from an Amazonian vine, for the past few years, but the time had never been right. Until now.

There were two back-to-back ceremonies planned for Saturday and Sunday night. I had initially planned on staying one night only, due to work obligations Monday morning.

At seven o’clock in the evening, I entered the meditation temple and found my place marked with my name and a few cushions, bolsters and blankets for me to sit or lie down.

The shaman/medicine man came into the temple around eight o’clock, after we’d all been cleansed with sage smoke by his female assistant. He gave a short talk. Myself and three others were the only first-timers. The other 16 people in the room had consumed Ayahuasca at least once prior to this occasion.

This medicine man happens to be French, though he spent two decades living in Peru and training under the guidance of the Quechua-Lamistas, Aguarunas and Shipibos indigenous peoples of South America. He’s also a Reiki Master healer and a Sun Dancer of the Red Path, and he has been adopted into the Dakota Tipi and Lakota/Sioux nations.

As a white woman and yoga teacher, I am aware that I’m not from India (not in this lifetime anyway). I am okay with cross-culture healers.

My husband, however, is Colombian. To him, the idea of a French shaman is a complete oxymoron. Next time we go visit Colombia, we’ll attend an Ayahuasca ceremony with a “real” shaman, and I will surely write about the differences in my experiences.

But, back to the story at hand. 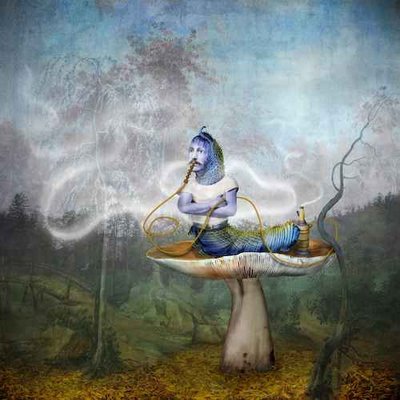 Each person in the semi-circle of the ceremony went up to the shaman who sat in the center beside his assistant. I was the ninth in line. I reminded him of my name and the fact that I’d only be there the one night. I told him my intentions: physical purification and spiritual clarity. I drank a shot glass three-quarters full of Ayahuasca. Its bitter flavor reminded me of cough syrup, but wasn’t as bad as I’d expected.

That night, all that happened to me was that I threw up and felt disappointed. I realized how much I was subconsciously clinging to great expectations around my first experience.

Way back in the year 2000, I had tripped on LSD once and magic mushrooms a few times. But no trip was to occur, really, on the first night. Or, only a boring one. Toward the end of the ceremony, I realized how much I was in my head and felt that my heart center was blocked.

Shaman then called me up, and asked how I was. I said, “Okay,” and told him I could not move down into my heart. He sang a few songs to me. The first, in Spanish, made my tears flow. I felt a subtle shift. He blew sage and tobacco smoke on me, using a dried palm leaf or some similar plant. He touched my head, shoulders and upper chest. I felt a significant shift.

Right at that moment, the chickens in their coop up the hillside started shrieking. I hardly noticed. I was willing to accept the experience and let go of my attachment to having a powerful or visual trip. I went to my room and fell asleep a little after two a.m.

The next morning, I was quickly and easily convinced to stay for the second ceremony. (This led to me quitting a teaching job that I was already in the process of quitting; it just sped up the process.)

Sunday evening, a bit after seven, I again made my way to the temple. This time, my intentions (which the shaman suggested I tell the Ayahuasca instead of him) were to drop expectations and open my heart. He gave me a medium dose of the medicinal tea, and I bowed with gratitude and went back to my spot.

About 45 minutes later, I made my way to the bathroom. While there, I vomited and began the journey of the night. I almost got stuck in the bathroom, fascinated by the water coming out of the faucet and the visual hallucinations that were beginning to come on strong. I somehow walked back to my seat and lay down on the cushions. It was a true Alice in Wonderland moment of vivid colors and shapes.

The hookah-smoking caterpillar shaman asked me, “Who… are… you?” I am me, and I am everyone. I felt a complete awareness of oneness and duality—at once! I felt myself wanting to cling to this pleasurable experience; at the same time, I knew that I had to let go and be open to whatever would happen.

The shaman’s song ended. Silence. Fear. I felt an evil spirit was inside of me, deep in my gut, and I could not let it come out. I felt everyone in the room focusing completely on me, especially the medicine man himself. He was coaxing the darkness out into the light. I heaved several times and puked something putrid.

Finally, I was done. It was out. I put the lid on my bucket triumphantly. I still don’t know what that thing was, but it was powerful, and it had been with me a long time. Maybe I will never really know.

The rest of the trip was a roller coaster of ups and downs. The vicissitudes of life. I started weeping openly when my dog Lucy came to visit. I curled up and was in bed with my grandma in San Antonio, Texas, feeling so safe and secure and blissful to be with her. (She is still alive and in her nineties.) I saw friends and relatives who have died. I flew all over the place—to Texas, California, India, Colombia, Canada, New Jersey, New York. This was the trip I had been so desiring the night before.

There was the lightness, the flying, the ascension, and then there was the darkness, the depths of despair, the descent. I felt in tune with the enslaved, the soldiers, the warmongers, the oppressed, the dead. I felt liberated, freed from the chains of corruption and inequity.

It was brilliant, fearsome, and fascinating.

I woke up the next morning feeling 10 pounds lighter, feeling reborn.

Much gratitude to all who were in the circle, to the shaman, and to every sentient and non-sentient being on Pachamama.

So You Wanna Do Ayahuasca?