An Important Letter to Father Christmas from Benedict Cumberbatch. 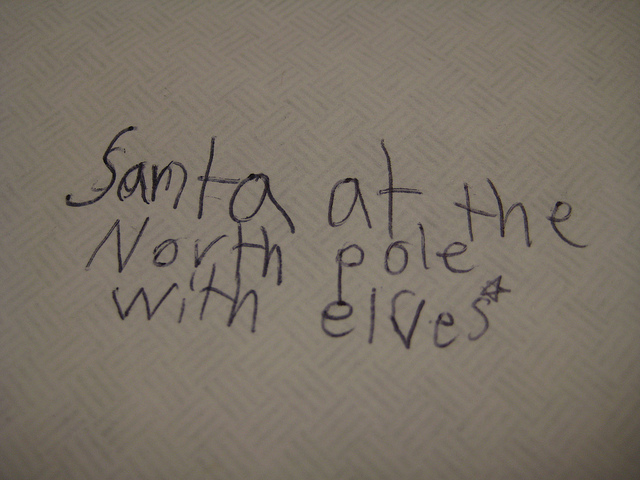 “My idea of Christmas, whether old-fashioned or modern, is very simple: loving others.” ~ Bob Hope

The art of letter writing is definitely not lost, especially around Christmastime.

Letters of Note have asked actors, musicians and writers to share their festive letters with their website so that we can all peek inside Father Christmas’ mailbag to see what type of letters he received.

Some of the penned letters have already been published on the site and more will be added over the Christmas period.

Benedict Cumberbatch, perhaps most famously known for his portrayal of Sherlock Holmes on the hit BBC series, and his wife Sophie Hunter have a one-year-old son, though, he showed that scribbling a note to Father Christmas is not just for children.


Cumberbatch’s heartfelt plea which started out:

“Dear Father Christmas, I have to confess it’s been hard to know what to say. Mainly because like most adults I feel preposterous asking anything of you because our time with you is surely done. Now we get our own presents, control our own fates, take responsibility for our own actions, and live in the world we have created…so it’s not for us to turn around and plead for your help with the environment, the migrant crisis, the NHS, education, food banks, human rights, fundamentalism and wars. Though God knows we need all the help we can get with all these man-made problems and more.”

Rather than focusing on materialism, Cumberbatch went on to explain how Father Christmas provides a little hope and temporary escapism, “You are for the children. Children who need some magic in a world were the borders between innocence and responsibility, playful imagination and cold, adult obstacles are continually shrinking.”

“This is what I’d like to ask you to help with. A little more time for children to be children. Stretch the moment of magic and playfulness. Distract them from the realities of a world gone mad so that they can laugh with their breath rather than sob with their tears. Especially those caring for family members, or suffering illness, hunger or poverty. Especially those hiding in buildings as bombs rain down, or being handed shaking with fear or cold into a boat to escape environmental disaster or war. Please help to light up their worlds with a moment of joy and hope.”

Cumberbatch explained how Father Christmas encourages and inspires children to try hard and, also requests a thought for those who do not have the same opportunities:

“But you do inspire wonder and awe amongst those that write you letters and go to sleep hoping there might be a new object in their possession come dawn. You inspire good behavior and, at least in my memory, some desperate last minute attempts to redeem bad behavior so as not to be overlooked. Spare a thought too for those millions who want to write to you but through illiteracy can’t. Hear their words and help to give them the time and chance to learn how to read and write so they can better their lives and escape their impoverished beginnings.”

Ending on a lighter note Cumberatch closed off with a kiss, “Lots of love, Benedict x P.S. Please could I have that lightsaber now?”

Cumberbatch’s letter may appear to be just another impossible wish list for the attention of Father Christmas. However, realistically, everything on his list is achievable. We live in a world that has enough. There is enough money, enough food, enough shelter and enough people who can educate others, so the issues that we face as we head in to 2016 should never exist.

In this day and age there should never be children or adults dying of starvation, there shouldn’t be children uneducated, and people should not have to live in fear of war or violence or disease. Although it is the holiday period and it would be wonderful to be able to keep this note positive and full of the joyous season, the reality is, for millions they will never experience a day of peace, warmth, food and comfort.

As Cumberbatch explains, all of our problems are man-made and that means they have man-made solutions, as well. We have people who have millions, billions even, in their bank accounts and yet, not far away we have those who will struggle to even find enough to feed them for one day.

Although we all do a bit, collectively, unfortunately, we don’t do enough.

When the majority of the world’s wealth is held in the hands of so few, it is easy to see how the world could be miraculously changed, if those few opened their hearts and minds to create a major shift in the way things are done.

We have war, unrest and extremism causing devastation on almost every corner. For the average person who doesn’t have the financial means to help and who doesn’t know where to begin, it can seem like an impossible task. Though, I have every faith that with the Internet and social media now being able to be a voice to get messages across like Cumberbatch’s, I fully believe that the future will be different.

Although Cumberbatch’s letter to Father Christmas may seem to many as a far-fetched and idealistic request, hundreds of thousands, if not millions of people will read it across the world and for every heart that it touches, there is a new sprinkle of hope.

Yes, I agree with Cumberbatch, we live in a “world gone mad,” although, I also believe this madness will turn itself around and although it may seem the world is volatile right now, I absolutely believe that although our planet is being shaken up, it is also bringing us closer together.

I have faith and I have hope. I believe in magic and I also believe in miracles. I genuinely believe the world will change. Sometimes, things just get a little worse before they get better. Just in my lifetime alone, even just over the past 10 years, I have seen an incredible wave of acceptance, openness, consideration and compassion. I have seen laws change, strangers shake hands, people dropping their judgements and people everywhere opening their hearts to things they used to fear. I have seen change. I see it every day.

I have belief. It’s all I have.

But, I firmly believe that change is happening.

To donate or learn more about the support and work is happening with the refugee crisis click here.

To donate or learn more about the support and work that takes place to eliminate world hunger click here.

With the World in this Condition, we must Turn to Santa Claus for Help.