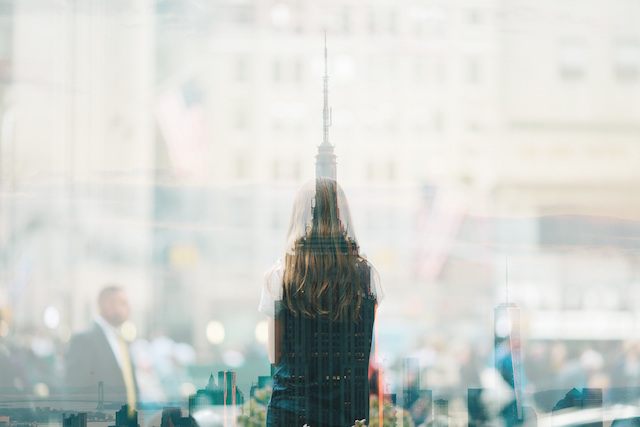 A friend recently asked me about feeling invisible. Why do women become invisible? Why do we allow it?

I will preface this with a reminder: hindsight is sometimes the only way we can see these patterns. When you’re in the middle of them, they can be damn near impossible to recognize. In fact, even when we become aware of the feeling, we can’t always connect the dots to find the cause until later on.

I have definitely felt invisible from time to time, but until I figured out the pattern that led me to that place, I just assumed that I was getting what I deserved.

I began my role as the Amazing Invisible Woman in early childhood. Conformity has never come naturally to me, but it was very much expected of me. Early childhood sexual abuse, coupled with constant criticism and disapproval was the perfect storm. I went into hiding. This expressed as weight gain, and a deep belief that I was not and never would be good enough.

Being a chubby kid who was criticized constantly and teased unmercifully as school, I grew to expect people to treat me poorly. I walked through the world believing that if I spoke up, or made a mistake, or failed in any way, someone would be there to humiliate and/or punish me for my inadequacy. And so, I continued to gain weight. I bit my young tongue when I had opinions that were not popular. I experienced less conflict with the outside world, which was the desired goal.

But, what I didn’t realize, was that I had gone to war inside myself instead.

This way of being in the world continued into my marriage, where any shred of my personal identity would be buried under the roles I began as wife and mother. I could certainly try to blame my ex-husband for this, but truly, I was just continuing to live what I had learned. And so I believed that his opinions were more important than mine, he was more trustworthy to make decisions than me, and I would never be good enough to be his equal. I grew to resent him, and became incredibly dissatisfied with our life together. But, because I had given all my power away, it took years for me to end our relationship. I was completely convinced that I couldn’t survive without him. The scared little girl inside me was terrified to stand up and use her voice.

When I finally asked for a divorce almost four years ago, I had no idea who I was. I had continued to insulate myself from the outside world. I was one hundred pounds overweight. I now know that I gained the weight to avoid attention from men. The weight was a way for me to subconsciously force fidelity. The weight also kept me planted firmly in my comfort zone. I didn’t have the confidence, or frankly the energy, to do anything outside of my norm. I still feared that there would be criticism and punishment if I tried and failed. I didn’t know how to express myself honestly. I repeated the same people pleasing behavior over and over again.

I had become a shadow of the woman I was born to be.

Today, I look back on that version of myself with so much compassion. I had embodied the scared, abused little girl I thought I was on the inside. That little girl believed that no one loved her, that she was not worthy of love, and anything that resembled love must be earned. She believed that she would be punished for expressing herself in a way that didn’t please others. She believed that if she tried something and failed, her failure would be met with criticism and disapproval from anyone who witnessed her missteps. She hid behind the soft fluffy cushion she had created around her body, because she thought she couldn’t face the world without it.

I now know that the times in my life that I felt most invisible, in relationships and the world at large, were the times that I was not living authentically. I was hiding behind my weight, behind the meek persona that I created to avoid conflict, and behind the shell of myself that I presented to the world to please other people. I was invisible—literally, could not be seen—because I had watered myself down to the point that there was nothing left of me to see.

When we begin to present ourselves to the world authentically—the good, the bad, and the ugly—we become visible again. As I dissect my past and share the painful things that happened to me, I am met with empathy and compassion. When I share my mistakes and regrets, seldom am I criticized or punished. Rather, others who share my struggle often reach out and tell me that they’ve been there too. As I share my honest feelings and opinions, even the unpopular ones, I find that people actually value what I have to say.

I’ve learned that while the scared little girl inside might still cringe from time to time, it’s perfectly safe for me to be all of who I am in the world.

And so, I have ended the war that once ravaged me. By making peace with myself, I have also made peace with the world around me. I no longer expect people to treat me poorly. In fact, I now demand that they treat me with respect. I have learned to love the woman I am by embracing the scars from my childhood traumas. Sometimes, I still see that scared little girl from my past. When she appears, I hold her tight and say, “You are safe, you are loved, just breathe.” And then, we walk hand and hand into the world with confidence and authenticity.

I am free to be all of who I am, because I no longer require permission or approval from anyone else.

That makes me visible, and real, and whole, and loved immeasurably by the one person who matters most—me.