This Isn’t the Crusades: Pope Francis Denounces Killing in the Name of God. 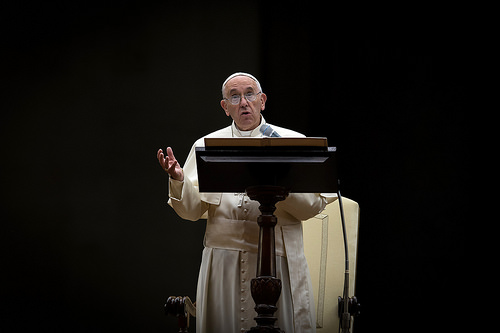 Pope Francis is taking a stand on religious intolerance.

His words: “God must never be used to justify hatred and intolerance.”

I love this guy. And I have been anti-Catholic ever since I was old enough to form my own opinions of the world.

The Pope has been touring Africa on a historic visit, and in his remarks last week in Kenya he stated:

““Here I think of the importance of our common conviction that the God whom we seek to serve is a God of peace,” he added. “His holy Name must never be used to justify hatred and violence. All too often, young people are being radicalized in the name of religion to sow discord and fear, and to tear at the very fabric of our societies. How important it is that we be seen as prophets of peace, peacemakers who invite others to live in peace, harmony and mutual respect! May the Almighty touch the hearts of those who engage in this violence, and grant his peace to our families and communities.”

Africa is home to the worlds deadliest terror group, Boko Haram. They operate across many countries in North Africa and link themselves with Daesh (IS), as well as Somalia’s Al Shabaab, who are linked to al-Qaeda. Both groups assault Africa with terror attacks consistently, though we in the west often don’t hear much of them. The Pope called the recent attacks by Al Shabaab, on a mall and a university, “barbarous.”

With the limited and narrow views that fuel much of the intolerance in the world, it’s easy to get frustrated and feel helpless. At least, I know it is for me.

Not this Pope. He remains a beacon of hope for the modern world, especially many Catholics who will perhaps wake up in the light of his words. (We can hope). I will follow his example and I will not allow myself to fall into helplessness and despair over the actions of extremists. I will fight hate with love, especially where I am watching the rapid spread of hate and intolerance in my dear United States.

Pope Francis keeps getting wiser and more relevant in my eyes. More and more I feel his words lining up with the teachings, and words of leaders that I have been studying and respect, such as His Holiness The Dalai Lama and Thich Nhat Hanh.

He speaks of love, tolerance, kindness, and true Godliness.

In this day and age with religious extremist motivation fueling terror attacks all over the world, we need to be mindful of our own personal stances and views.

We must dedicate ourselves to remaining in a space of love and tolerance—or the terrorists win. When we respond with hate and intolerance we give them what they want.

I spent years being judgmental and intolerant of anyone who preached religion at me. I was jaded and disillusioned with the the world and its history. I was tired of the hypocrisy I witnessed at church growing up. How or why I realized at such a young age the hypocritical behavior exhibited my many who claim religious beliefs, I am not sure. But I know that I was aware of it, and I know that it turned me away from religion for years.

Now though, from more learned viewpoint, I see the topic of religion for what it really is—a multi-faceted and complex topic that gets people going almost as quickly as gun control in America.

Having studied religious history, I was turned off by the Vatican’s position throughout history, which has in the past encouraged intolerance and hate. The Templars of the Crusades era frequently attacked Muslim pilgrims and caravans, often slaughtering innocents. The Popes of the Renaissance era regularly encouraged persecution of those they branded “heretics,” who were usually Pagans and/or Protestants. These “heretics” were often killed by burning at the stake.

Many of us who claim Islam is violent, would do well to check our own religion’s history first. Christianity’s hands are not clean either.

Claiming the United States as a “Christian Nation” and using this to back up intolerant views of Muslims could not be more un-American. The United States was founded by those seeking religious freedom. They were fleeing persecution from the Catholics of Britain. In other words they were religious refugees.

I want to bang my head against a wall when I hear the rationalization and justification that flies around after a white, Christian shoots a place up in the name of his God. It’s pure delusion to believe that these actions are any different than the next terrorist plotting to blow something up.

I have struggled through ups and downs over the years, and have come to a place where some religious teachings are a vital part of my every day practice. It doesn’t matter what teachings they are and where they come from. What matters is that without the freedom I was given as an American—to fumble my way through the religions of the world—I never would have come to my own understanding and awakening. The practices and teachings I use in daily life help me to be a better person, and in turn improve the world around me.

I have a positive impact on those whose paths I cross. I spread love rather than hate and intolerance. And this is thanks to my own interpretation of many different religions’ teachings.

The bottom line is this: the fundamental principles of most religions is the teaching of love, tolerance, and goodwill. It’s only the extremists who take these teachings and twist them to fit their own dark beliefs.

Just because someone is a white Christian American, doesn’t make it okay to be intolerant of others who hail from a different religious belief.

Shooting up Planned Parenthood in the name of Christianity’s God is no better than the Muslim suicide bomber blowing up the town center.

Even the Pope agrees with this.

Are You a Religious Extremist?