With the World in this Condition, we must Turn to Santa Claus for Help. 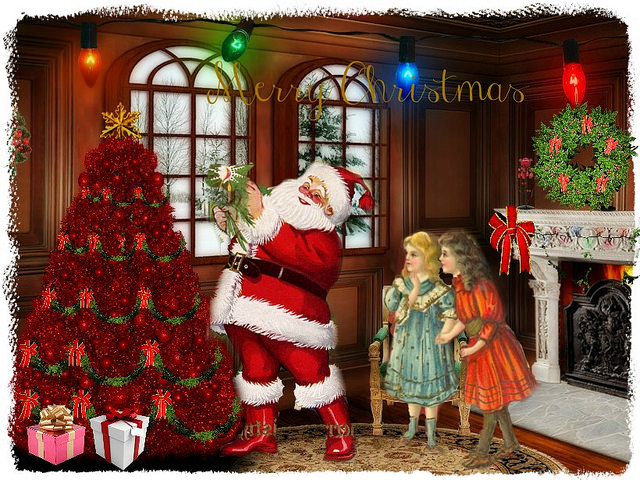 This is my first time ever writing you a letter, and the weirdest part of all is that I am not a kid—I am an adult.

I don’t really know why I’ve never written to you before. I truthfully never believed you existed. You were too good to be true. I mean, come on, a cute, fat, bearded man wearing red, living in the North Pole with an army of elves, making gifts for the world and distributing them on Christmas with a reindeer sleigh? Well, it seemed too magical for me.

I totally understand your confusion. I know you’re puzzled, most likely raising one eyebrow and stroking your white beard.

What makes me write you a letter now when I should have written many years ago?

Do you have a television in the North Pole Santa? Do you watch the news? If you do, you saved me a good deal of explanation. You see, Santa, the world is going insane. Never before, has the world seen such violence. There are countless shootings, innumerable bombings, rape, hunger and torture.

You see, when I was a little kid, I never thought that a human being could be capable of harming another human being, who breathes just like him. It was too unreal for me. But look at the world now. What I thought would never be real is actually happening every minute in every country.

So, why I figured, I may as well believe you exist.

We never believed that violence could reach this level and there you go, it’s everywhere. Why not believe in an innocent man who only wants to give gifts on Christmas? I hope I have cleared your confusion concerning this startling letter.

I know you’re wondering what I want for Christmas this year. I think compared to what everyone else asks from you, you’re expecting me to tell you that I want a car, a phone, a tablet or an x-box. Well, I don’t. My wishes have nothing to do with materials this year. I understand if you want to torn the letter by this point, but I only hope that your factory full of elves could at least provide me with some of what I want.

Santa, the first gift I want is peace among all nations.

People are killing each other without any consideration or second thoughts. It’s like humanity has been deprived of its blissful qualities. Can you at least put some consciouceness below people’s trees?

I don’t know what happened to the world, but something went terribly wrong. We’re changing each other, we’re judging, we’re not accepting our brothers, friends or lovers. We are setting expectations of almost everyone we know. Can we just love? No conditions? Not asking for something in return?

I know this one’s hard and I thoroughly understand if you can’t fulfill it. But I’d appreciate you trying. I don’t know if your elves have been showing patterns of “egoism” but in case you don’t have this kind of thing at the North Pole, well, it’s deadly. Remember the shootings, bombings and war I have mentioned earlier? They’re all stem from a person’s ego. Because almost everybody wants power and money.

Can you work it out?

Oh Santa, you’re wrong if you think that people are getting enough out of what you put under their Christmas trees.

Do you know that people are fighting and rioting in malls and shops on black Fridays? Have you ever watched, Fight Club? If you haven’t, you should!

“We buy things we don’t need, with money we don’t have, to impress people we don’t like.” ~ Fight Club

I know you agree! I only hope you can work this out.

I know what you’re thinking. You’re thinking if maybe people would feed other people with what they were going to buy on black Fridays, world hunger would decrease over the years. Well, I hope so too, but no.

Sixth! Can people please start working on themselves on an individual level?

Oh Santa, I highly advise you to create an account on social media and see what people are sharing. Everybody wants world peace and to change for the better. The positive side is that we are asking for this. The negative part is that we’re missing the whole point. Instead of starting to change ourselves, we are only nagging that the world must change. Weird, right? (And it’s weirder that I’m one of them and I just realized this few years ago.)

Seventh, (I’m almost done, I promise), why are people pursuing the wrong things?

Why are they running after what doesn’t really matter? (Don’t freak out, this is only a rhetorical question. I know you’re shocked and don’t have the slightest answer to this abnormal question.) People are running after money, jobs, positions, marriage, power, fame. They really think that they are staying on planet Earth for at least the next 300 years.

Can you send one of your elves to spread awareness? You know, awareness about impermanence and so on?

I heard you can create glitters to sprinkle all over. Maybe say an effective spell and spread it over planet earth? Pretty please!

Okay, I’m done. I hope I didn’t steal much of your time. I’m just a human being living on the other side of this world and thoroughly saddened by what I see every day.

Well, they’re seven wishes. If you can provide the world with at least three, I’d be the happiest person on Earth!

Dearest Santa: Can We Please Rewind?