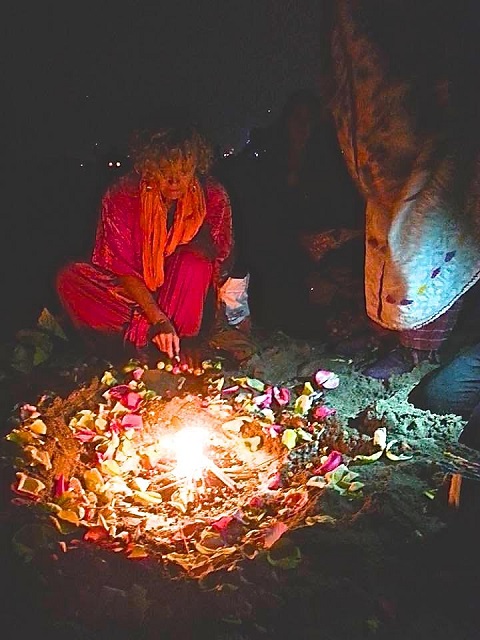 I must confess—I love to play with fire.

Sage, sweetgrass, palo santo, incense and beeswax. Dried wood piled high upon the sand. Lanterns which lift up into the night.

They say fire is a transformative element. It burns, it scorches, and it makes light—allowing us to love the darkness, so long as we have a torch in our hands.

And what of the inner fire? When we ignite a truth—that which is most terrifying, that which we would rather have kept dark, after all? What do we do with the wild fire, as it seems to eat up everything in its path?

When I was a young mother, my older brother accidentally set our old cottage on fire for a second time. It was a simple wooden structure—one that had been rebuilt decades ago, after he had burned down the original cottage as a child while trying to light a camping stove. My brother has fire karma.

The night of the fire, the rest of our family was sleeping in a newer cottage on a neighboring lot, and we were awakened by a massive boom which rocked the entire lake, heard by people miles away. It was the sound of all the windows in the old cottage exploding outward simultaneously, when the carpet fire inside reached its peak.

We ran out onto the deck to witness the sight of the cottage, where my brother was sleeping, surge up in a towering wall of flame, three stories high. Half-awake and half-dressed, my father lurched up the path toward the inferno, wailing my brother’s name—while my mother followed, as if in slow motion, dragging a hose that wouldn’t reach.

I staggered after, five months pregnant and clutching my sleeping four-year-old close for fear the flames would quickly spread and engulf the whole side of the bay. My father tried to ram the back door of the sizzling building to get in, but it exploded against him—spewing like dragon’s breath, throwing him on his back on the ground and burning his face. My brother was gone.

Time stopped. The roar of the fire was so hot, we could not hear our words—could not stand within twenty yards. Everyone was forced back, and we gathered sobbing together amongst the trees, while clouds of burning embers rained down from the sky.

Then, like a dream—like an impossible imagining—we heard a voice, my brother’s voice, calling my father’s name.

Emerging like a ghost out of the darkness by the lake, his form appeared—climbing up from the water’s edge. He had taken the canoe for a midnight paddle, forgetting a towel draped over a lamp.

Out on the lake—lying down afloat in the canoe, while looking up at the stars—he had heard the explosion like the rest of us and then heard my father calling for him. Incredibly, unimaginably, my brother was alive. I will never forget my father’s voice and the look on his face as he fell into my brother’s arms.

The second miracle of that night was that there was not a breath of wind in the air. The raging tower of flame went straight up—far over the tops of the trees—and with the help of every neighbor in our bay passing a chain of buckets from the lake, we contained the fire and the forest did not catch.

It had been one of the driest summers on record, with a strict bonfire ban in place. The solitary fire truck—which managed to get to the scene through the narrow, pitted back roads—arrived hours later. If there had been any wind at all, the fire would have certainly spread rapidly, and an entire sleeping lakeside community engulfed and destroyed.

The next day, as we nursed the burns on our feet, through tears of shock and relief we looked at one another with new eyes. The old cottage, holding so many childhood memories, would not be rebuilt again.

Years later, when my father was dying of cancer, he would help my brother build a small cabin nearby—an act of creative commemoration, leaving the original site empty and naked of trees, a shrine to that miraculous night.

I can never go back there—to that world where we spent summers close to the wild moody lake, living off picked blueberries floating in milk, eaten as we sat on the sun-warmed rocks. One of the many fires in my life has transformed me and burned those days to coal and soot, making way for an inner light I never suspected at the time.

I still play with fire and do not fear it.

Fire, ice, water, air—there are many ways to die, or to be reborn. But when a powerful force comes so close and then pulls back its hand—granting an unimagined reprieve—I have to trust it to burn what is meant, nothing more and nothing less. To observe it as an extraordinary karmic moment, when everyone present is brought to an examination of the treasure that is life and given the chance to choose it anew.

As beings of form, each of us must one day face the transmutation of the physical—the all-consuming power of time to extinguish what was once burning strong. I do my best not to pull away from this understanding, but rather to surrender to the heat—to become the ash. I bow to what I cannot resist, and dare not deny.

In my deepest hopes, I profoundly trust this process to take me exactly where I am meant to be—in every moment of my approaching death and in my present life.

One day, I too may be consumed and alight. 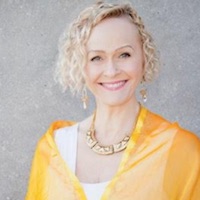