Do You Have Sticky Feet? 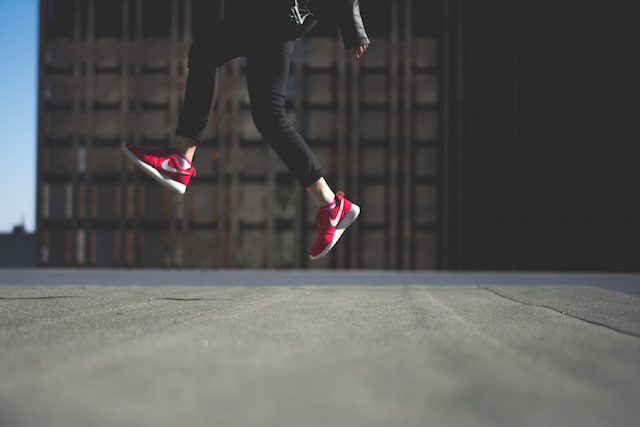 Recently, while attending a women’s leadership conference, I learned about the concept of “sticky feet.”

The presenter referred to how women often get sticky feet in jobs, leading them to stagnate in a position for an extended period of time. Rather than rising through the ranks, or at very least moving to the side and gaining new experiences, women choose to stand still.

It got me thinking about “sticky feet” more generally. How many of us languish in relationships for too long? In lifestyles?

How many of us are afflicted by sticky feet that got so sticky, we simply got stuck?

The friend I attended the conference with felt her feet had literally molded themselves to the pavement a long time ago. An incurably risk averse individual, she finds taking any sort of leap, shuffle or even sidle beyond difficult, almost impossible. From relationships, to jobs, to changing yoghurt brands, she’s stuck. As an accountant, her sense of calculating risk often leads her to a sum total of: staying in her exact position. So while, intelligent, charismatic, skilled and attractive, she finds herself in the same job she was in over a decade ago, single, in her mid-30s, and leading a similar lifestyle to the one she had in her mid-20s. She would say she’s so stuck she’s fused to the ground.

I, on the other end of the sticky feet scale, have soles like Teflon. I’m so far removed from the sticky barometer, I might start levitating off the ground. I’m an incorrigible changer. I’m always doing something, or starting something, and I’m not plagued by the notion that I need to finish any of those things. If I don’t make the full distance, I brush the activity aside whimsically with a, “it wasn’t meant to be.”

My friend and I are on opposite ends of the scale, the ying and the yang of stickiness. But which is better or worse? And how can we find balance? We need to be somewhere in between radically changing our lives every other month and getting stuck in a stickiness rut.

The need for constant change can be supremely positive, but when does it get to close to the edge? When does it simply become an appetite for destruction?

Having observed my behavior for a good 30-something years, it’s become obvious to me that I like to build things up, only to get to the pinnacle and tear them down and start afresh. In a literal sense, it reminds me of the burning man festival. Where people come together in the middle of the desert, resurrect a city of creativity, participation and radical acceptance, only to pull it all down, leaving the desert, without a trace of them at all.

Burning man the festival occurs annually, and I often get the sense I’m conducting my very own “burning woman” on a yearly basis too.

Often when I’m in the throes of another convulsive mood change, I think of the Elizabeth Gilbert’s Eat. Pray. Love. For those of you who haven’t read the book or watched the movie, Eat. Pray. Love. is Gilbert’s memoir of a radical change period in her life, when she discovered she wasn’t happy in the life she had deliberately constructed for herself. The house, the husband, the lifestyle—it was all wrong. And in the throes of an existential crisis she heads to Italy (Eat), India (Pray) and Bali (Love) for a year of rediscovery.

One of my favorite quotes in the book is:

“Hadn’t I wanted this? I had actively participated in every moment of the creation of this life. So why didn’t I see myself in any of it? The only thing more impossible than staying … was leaving. I didn’t want to hurt anybody, I wanted to slip quietly out of the back door and not stop running until I reached Greenland.”

Common sentiment? For me it is. Often I actively participate in decision-making. Shaping and changing things quickly, only to, very shortly down the track, discover that this place, this particular situation isn’t right for me—so hold on, let me unravel it and come away with a clean slate.

I believe that to live fully we need to find a balance between my friend’s fused and my Teflon feet. Often we exist on one end or the other of the scale; few of us survive down the middle.

So, what do I do to avoid the steady decline into chaotic revolt? If you’re an epic-changer, how can you avoid a personal riot?

When the tornado of change is blazing around you, whipping your hair, tearing your clothes, igniting your heart, you have to find the eye of the storm.

Keep your feet firmly planted on the ground. Even momentarily, for the shortest period of time, and before you know it, the storm will pass and you’ll be able to reassess it again in the morning. Nothing seems as bad in the morning, and all things are put back into perspective.

Sometimes to achieve anything, to be the person you’re always chasing, you need to stand in place. And not move.

What would I tell my sticky-toed friend?

Move. Now. Before it’s too late. Life is filled with infinite possibilities, but if you resist them, you’ll never get anywhere, and you’ll find yourself at the end of your life wondering, Who lived my life? Me or aversion to risk?

Many forms of mindfulness and well-being focus on the notion of finding the balance within. The balance between the wild, constantly changing side of things, and the stagnate, unwilling to alter, fear of the unknown side of things. We have to learn how to walk the line. And sometimes, like a tightrope walker, we’ll stumble and fall off, which is fine, as long as we’re not standing over a chasm. And even if it is a chasm, an abyss, a void, every gulf has its end.

Every now and then, when you’re feeling too cement or Teflon like, remind yourself of the Elizabeth Gilbert quote, “Maybe my life hasn’t been so chaotic. It’s just the world that is and the only real trap is getting attached to any of it. Ruin is a gift. Ruin is the road to transformation.”

Why ‘Eat, Pray, Love’ Was More Than Just A Movie For Me {Plus Liz Gilbert’s Great TED Talk Video}.