How Climbing a Mountain Helped me Deal with my Divorce. 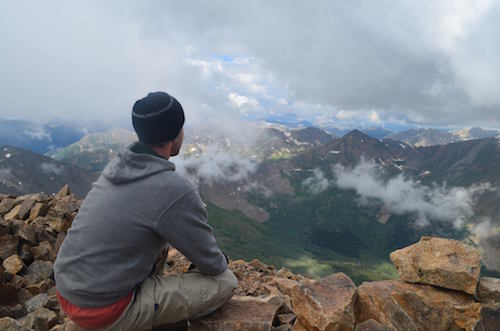 Much of the hike was enfolded in clouds.

Not fog—at over 10,000 feet, you really are surrounded by the clouds.

Something felt appropriate about this setting as I climbed Mt. Elbert in the collegiate range of the Colorado Rockies. It was July 31, 2014, the day my divorce was to be finalized.

And just like my trek, my life felt enshrouded by uncertainty—the clear vision of my future gone, replaced by a haze not unlike that which I was encountering that day on the trail.

I knew I needed to get out of Denver—away from my house, work and anyone that was familiar. As the dreaded date approached, I thought frequently of a biblical verse that resonated with me:

The mountains, my place of perspective, were calling. Because I knew I was facing the most miserable experience of my life, I decided it was fitting to spend the day tackling the tallest mountain in the American Rockies—Mt. Elbert.

It certainly wasn’t the most challenging of Colorado’s peaks (I wasn’t planning a suicide mission after all), but something worth doing to remind myself that life continued and adventures still lay ahead.

The night before my hike, I drove to the town of Leadville, (about 10 miles from the trailhead). I ended up checking into a motel because it was raining too hard to set up a decent camp. I walked across the street to the tavern for a beer.

After I returned to my room my phone chirped. To my surprise, it was my wife (at least for the next 18 hours). She texted me to say she had received a letter I’d sent her. She thanked me for allowing the process to be as easy as possible and said that despite leaving she would always love me.

I wept bitterly, then slept restlessly.

Near tree-line, I began to climb above the clouds, which separated on either side of the trail as if Moses had struck a rod into the stone and split the sky himself. Looking down from a higher elevation, it resembled a great white sea.

I was profoundly moved in that moment by how one of the saddest days of my life could manage to hold such breathtaking beauty—that such awe and such brokenness could co-exist.

I reached the summit of Mt. Elbert and pondered all of this, knowing it was all too fitting that I started the day in darkness and clouds, watched the clouds break with such splendor (knowing such beauty never would have existed without the presence of the clouds) and then reached the summit of the highest mountain I’d ever climbed.

I won’t pretend that life was perfect after that day or that the process of moving forward didn’t present ups and downs, but I felt an ounce of hope on Elbert. And considering that my divorce was finalized while I was on that journey, that was an unexpected victory.

Before I left the summit of Elbert I snapped a few photos while chatting with other trekkers who made their journeys that day.

Then I waited until I had a few minutes alone.

When that moment arrived, I reached into my backpack past the granola bars, the map and my compass. At the bottom of my pack I located my wedding ring. I pulled it out and as it gleamed in the sun, I remembered how it gleamed during our vows almost three years earlier. I ran my finger over the word “forever” that was engraved on the inside of the ring. And I let it fall from my grasp deep into the rocks a few feet off the summit, listening as it came to rest far beneath the heavy stones.

The symbolism for leaving my wedding ring on the mountaintop that day was significant. It represented the towering but unrealized dreams I had for my marriage. It was a way for me to separate myself from something sacred while leaving it in a sacred place forevermore. And I saw it as the first real tangible step in moving forward and allowing myself to let go of the visions of how I believed “forever” would unfold.

Throughout life, we all climb mountains. For many, they are figurative experiences. For some of us that are more adventurous, we literally strap on our boots and set out on the trail (or make our own).

On that day I survived both literal and figurative mountains. Doing something that reminded me I was alive and that life was still worthwhile helped me to endure, and I’d recommend that others going through a perilous time in their lives consider something similar, whatever fits their needs or interests.

And for me, coming to believe I could conquer something as harrowing as my divorce means a big pile of rock doesn’t intimidate me that much anymore.

Coming Apart with Grace: Taking the Darkness out of Divorce.

Photo: Courtesy of the Author.