Wearing out his Welcome: This State is the First to Dump Trump. 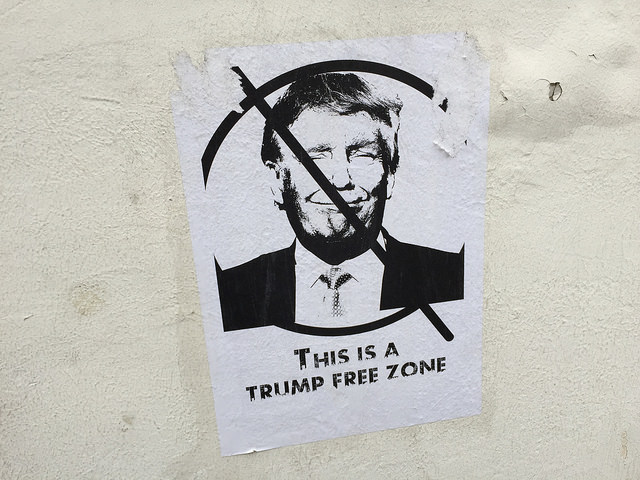 In a deliciously brilliant moment of news in the debacle that is the 2016 American presidential primary election, Donald Trump has been banned from the historically Republican state of South Carolina—by members of his own party.

The UK doesn’t want him there either, they have a petition with over 500,000 signatures on it.

When your own party bans you from their state, it might be time to quit.

Is the illusion fading? We can only hope.

South Carolina state Rep. John King (D) said Trump was “not welcome” after Trump removed peaceful Muslim protesters from a rally in Rock Hill. King continued that he was “sick to his stomach” over

Trump’s actions and that he would be filing a House Resolution to ban Trump from the state.

In an interview with The Herald, King said

Trump is “a race-baiting, xenophobic bigot and is not welcome in the state of South Carolina,” continuing that “Democrats and Republicans don’t agree on much in South Carolina, but most of us agree that Donald Trump is an embarrassment to our country’s political process …Why would we welcome someone to our great state when even our senior Republican U.S. senator (Lindsey Graham) agrees that Donald Trump is nothing more than a modern day George Wallace who preys on people’s fears and prejudices. It’s time to stand up to this big mouthed bigot once and for all by announcing that he is no longer welcome in the Palmetto State.”

Mr. King, I applaud you.

Rock Hill, South Carolina has a history of fighting racism, and vows not to accept such a figurehead of bigotry into their town—they are proud of their history of fighting against racism and even display signs commemorating history that state their city motto: “No Room For Racism.”

Mr. Trump I believe you may have started with the wrong city.

To me, this news is too deliciously ironic to ignore. I have been watching this circus unfold as though I was witnessing a slow motion car wreck—feeling powerless to stop it yet unable to look away—stuck in between horror and fascination at what is happening in our country presently.

After I shared the video of Trump throwing a Muslim woman out of his rally for peacefully protesting and the debates that accompanied my sharing of that video—debates that included lots of name-calling and labelling (not by me, but aimed at me), appeals to authority, appeals to emotion, lots of TEXT YELLING and misspelled words, all backed with the usual re-spewing of hate rhetoric propagated by the media and sucked up by the masses—I was a bit worn out.

After all the names I was called and labels that were thrown at me, I was a bit of the mind set, “okay America, do what you will, I will stay down here in Australia and laugh at you for this one, I’m done trying to remain open and loving amongst all this hate,” but that did not prevail. I meditated and snapped back into love. I followed up one debate by laying claim to the only label I was called that I can really cop to—which is tree hugger, and I gladly shared a picture of myself hugging a giant Ponderosa Pine in Yosemite Valley for effect.

My adversary then laughed as I caught him out there off guard with my willingness to claim tree hugger, and the raging debate actually ended on friendly terms with me asking him to do me a favor and just to please examine his beliefs and make sure they were indeed his. To do some research and form his own thoughts. What can I do. I’m not attached emotionally to my beliefs, I just want everyone to research beneath the surface and form their own opinions. Even if he doesn’t agree with me, at least I planted a seed.

The other one, I just laid down a calmly thought out and researched proverbial slam that just silenced all the appeals my debater was making to emotionalism and sensationalism. I basically gutted his illogical claims with flat non emotional truths and was met with silence. Crickets.

It was quite the “slam, drop the mic and walk off the stage” moment.

Now let me be clear for a moment. Racism is not funny. Donald Trump would be funny if he wasn’t so supported. Reverting to the 1950’s doesn’t appeal to me. Reliving Nazi Germany isn’t funny. The state of the world isn’t funny.

The chaos, war, bloodshed and suffering, the destruction of the planet—none of this is funny.

What’s funny is human nature and the way we will insanely cling to close-minded beliefs when we are afraid. What we can laugh at is how humans sometimes have a complete inability to see what is good for us while it is happening. There is nothing like a good political paradox to make me laugh hard at the powers that be.

When we can pause and step back from ego, instead connecting wth the greater consciousness we can see and appreciate those ironies.

That’s the thing though, isn’t it? That in these times that are so dark and hateful—these are the times that it is more important than ever to maintain and remember our senses of humor. These are the crucial times that to simply keep our light and our laughter becomes an act of defiance in itself.

Being able to laugh in the face of the evil that shows up as ignorance and chaos while quietly resolving to fight this darkness to the end—well, that’s exactly what they don’t want us to do.

If we can’t laugh, we are doomed.