I’m Sorry for What I Said Before I Yoga’d.

This apology could be for my entire life before yoga.

Do you remember your life before yoga? I do, clear as a bell. I was ambitious, hard and ego driven. This served me really well as I propelled through college and out into a competitive career in television.

Four weeks after landing a dream job at The Comedy Network, my mother died. She had finally lost her long battle with breast cancer. It was December 12th—I gave myself three weeks away from the office to get over it.

In the wake of my mother’s death, our family disintegrated. My father, sister and I were left completely alone in our grief and at a time when we should have held on tighter, we were separated. Lost and acting out in ways that ultimately were completely detrimental to our well-being, we alienated each other.

Not a day went by that I didn’t deflect the sad looks inadvertently sent in my direction by quickly making a dead mom joke.

Haha, let’s laugh and get rid of the uncomfortable look and the awkwardness of people who have no f*cking idea what to do or say to the bereaved. This tactic worked so well I used it for seven years. Seven years! And then it didn’t work anymore.

Comedy has always been my muse. In fact it was also my mask and armor. Everything said in comedy, no matter how blue or distasteful, comes from a basis of truth—that’s what makes it funny. If I can make a joke of the painful, the awkward, the downright frightening, then I can shove the feelings part down into the abyss of my psyche.

Around the seventh anniversary of my mother’s passing, I decided to attend a month-long yoga teacher training, not because I wanted to become a yoga teacher, but because I had hit bottom.

After two solid years of production work—first in creating, producing, directing and starring in my own comedy television series, then joining the Canadian launch of a major television brand, I was burnt out, uninspired and making terrible choices for my health. I was only making it to my yoga mat once every other week, and usually my work acquaintances and the bar won out more often than not. My love relationship was stagnant and my quick-witted, comedic, happy-go-lucky personality had become surly.

The only place I felt any real relief was on my yoga mat. And I’m very Type A, so I figured if I was going to invest in a month on my yoga mat I should land the proper credentials to go with my time. I needed to go to a place where I could step off the airplane and exhale deeply. That place was Nosara, Costa Rica. Over the years I had spent a fair amount of time in this little beach town. For me it was healing and magical—and they had a yoga school.

The chanting and Om-ing made me slightly worried that I had joined a cult. I kept looking around the room at the facilitators: their eyes clear and sparkly, their bodies relaxed and open, their smiles easy. I gave in—whatever they were doing was working for them and what I was doing was clearly not. I began to chant. By the end of the first week I was chanting and Om-ing along with the 60 other yogis.

I made friends with a lovely British woman who was running to her yoga mat after a devastating divorce. She was cheeky, and together we were able to find our feet in the weirdness of that first week. Sometimes we would giggle and chant “Porrrrrrrrnnn” while the rest of the yogis chanted Om. Comedy gold!

One quiet day while sitting on my mat listening to a lecture, I heard my mother’s voice. She said, “Hi Shell.” It was as clear as though she was sitting behind me whispering in my ear. I looked around the ranch at the people’s faces. Had they heard her too?

This was the first and only time she came to me. It was then that I realized the weight of what I had been holding onto. Every dead mom joke I had made dishonored her memory.

The whole teacher training thing broke me open—my heart, my head, my body. I always say that if I’d know what was going to happen, I never would have registered for teacher training. My yoga guru said each morning, “Look around the room and see where you’ve landed.”

I had landed exactly where I was meant to.

My journal was filled cover to cover. I cried—I mean really cried. The tears of seven years of grief, along with the tears of six years of being strong for my then-dying mother, flowed like freaking Niagara Falls. I’m pretty certain I was known as “The Crying Girl” at training. When you haven’t dropped a tear in 13 years, a dam breaks.

I wasn’t left exhausted by all the tears, rather I was feeling lighter with each spill. Release!

In the nine years since that first yoga teacher training, under the tutelage of the most amazing human beings, there have been many more lessons. I consider yoga my 12-step program.

I meditated on responsibility, which had always had a negative connotation for me because I had too much. I meditated on ego, enough, forgiveness and letting go. I learned to be a kind person, first toward myself and then toward others. I learned compassion. I learned patience. I learned love.

But most of all, I learned that while comedy is a part of me, dead mom jokes are not. 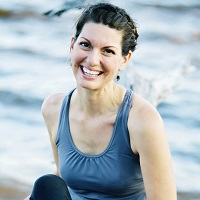