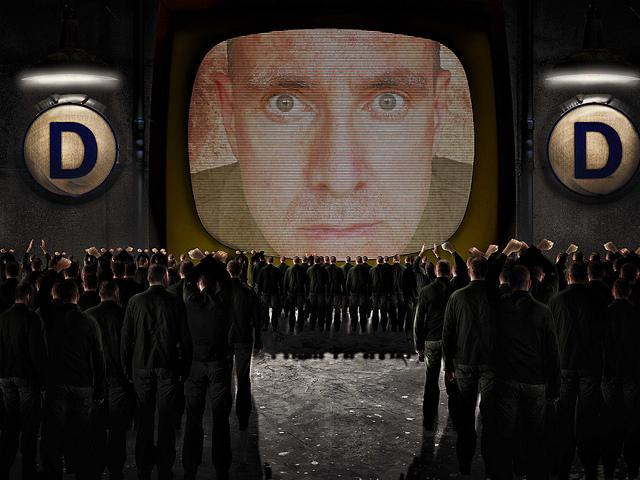 Human beings are social animals that must somehow arrive at decisions concerning their collective futures.
Democratic politics involves reasoning through these decisions with others. It involves moderating among multiple conflicting values and talking through divergent goals. Whether it is in the family or in the state, we are constantly challenged to think through how we live together. Even when we are not conscious of it, we negotiate our futures together.

The way we conceive of our relationship to the rest of humanity will have a profound effect on our political beliefs and values. All things are interlinked, human societies most intensively. We can’t get along without others, nor can we thrive. Nor do our views arise in a vacuum. Rather, everything about our most unique personal attributes is related to the books we read, the people we know, the places we live, the societies of which we are a part. But American conservatives and libertarians seldom recognize these relationships, and this allows them to place disproportionate blame on the poor and marginalized.

The idea that we are dependent upon others and must work with them to forge a collective future can suggest a loss of self-control. And it requires us to think more deeply about causes and effects. This can be irritating to the impatient, self-centered, cynical, and selfish. And these qualities are increasingly descriptive of American conservatives, whose verbal incontinence is perhaps best exemplified by Donald Trump.

American conservatives are frustrated and they are frustrated by the decisions we have made together to which they feel themselves bound. Some of these involve how we should communicate, some concern the rules of the economy. Conservatives regularly turn on the rules they helped create, making it possible to read in their dislike for government a euphemism for their disdain for democratic politics per se.

If politics is the art of negotiating how we live together, then it is shot through with morality. Every political decision is in this way a moral decision. We hold politicians to higher moral standards and expect them to act selflessly precisely because politics is a moral business. This is why we are comfortable with people pursuing their own career goals, with little sense of public purpose, but find such behavior in politicians abhorrent. People the world over expect politicians to act in their shared collective interests. And yet, American conservatives these days are far more likely to look skeptically on any form of public service.

Aristotle noted almost 2,500 years ago that “man” is a political animal. The businesses and roads, technologies and infrastructure that surround us are the product of shared decisions. Much of our world is the product of institutions whose roles have been agreed to by voters and consumers, bureaucrats and executives, elected officials and the judges they appoint. The same goes for the ways we interact with others. Politics is essential to our social being, for we cannot escape negotiating our futures with others.

At birth we are thrown into a world of shared decisions. Through our lives we build on those decisions in a mass collective-visioning process played out in the press, in classroom-discussion, in elections, the things we buy, and a thousand other half-conscious ways. Since politics regulates how we live together, abandoning politics means abandoning our shared fate and a fundamental element of our humanity.

The politics of our being is the very being of politics. To give up on politics is to give up on one another and ourselves. The cynicism that results is largely an irritation with human existence itself. If we cannot learn to reason with others in the give-and-take of politics, whether it be the politics of a family, a business, a non-profit, or state, then we cannot live in harmony or know what it means to be human.

Social media platforms have made politics accessible to the masses. Even as Americans appear more politically uninformed than ever, everyone seems to have an opinion on everything. And everything about how we live together seems to be up for question. However, the political advocacy in which we now so casually engage is a pale shadow of the shared reasoning that Aristotle had in mind.

Americans today substitute advocacy for reason. But much of the anxiety pervading political debate stems from not understanding the issues upon which we take stands. We are paranoid because we are ignorant. We are reactive because we lack confidence. We are burnt out because the world we confront appears alien and frightening. Most of us would do well to study the issues more and advocate less.

Whereas reasoning with others can teach us how to live together, advocating against the wishes of others can tear us apart. And the social body torn asunder fosters the anxiety of individuals living in alienation. Much of the stress of modern Americans is the result of living in irresolvable tension with others. And we cannot resolve these tensions because too few of us believe in the process by which we might renegotiate the most basic rules governing our behavior.

If conservative politics looks increasingly like a circus, perhaps it is because American conservatives are not engaging in democratic politics, but rather a rebellion from the shared burden of freedom. This makes their hatred for government really a hatred for democracy. They hate democracy because it brings up in them irresolvable existential tensions, which they impossibly seek to bypass. But they cannot bypass these tensions because they’re fundamental to our humanity. This makes their political participation itself a sort of act of self-hatred. They project their dissatisfaction with the structure of human existence onto the structure of the political system. And the more they engage, the more their frustration  increases.

Projections like these are a fertile field for fascism.

Fascism is many things: the merging of state and society, the immersion of self in state, and finally, the eclipse of social reason. All of these involve a denial of our political natures. The fascist can neither live with others nor live with himself, and so he destroys them both by obliterating self at the altar of society. To cover up the crime he claims to be the greatest of individuals, even as he mimics the exact language of the political elites whom he follows. The fascist worships the strength of the individual, even as those whom he follows destroy the individual at every turn.

American liberals may have their own set of problems. Spiritual aspirants tend to have their own pathological ways of dealing with our political nature. But this mass conformity in the service of some mythologized individualism, is a problem that appears unique to American conservatives today. It allows them to escape their most basic social responsibilities and to aggrandize themselves while blaming the most downtrodden. It is a virus far more deadly than ebola or the bird-flu and it’s time we inoculate ourselves against it with reason.

If you liked this article, please check out my book, Convergence: The Globalization of Mind