What are You Starving For? 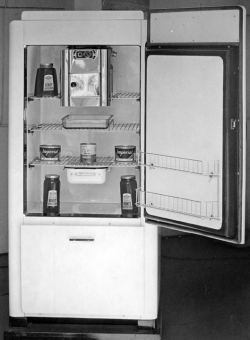 I have a vivid recollection of the refrigerator in my parents’ house.

The exterior of the side by side doors dingy from years of sitting in a cloud of cigarette smoke. The ice maker broken, the tray below it still damp. I pull the door pen. A pungent funk greets me. The light bulb has burned out long ago.

There is no need to illuminate the spills and stains inside, or the shelves of rotting food.

How strange it was to open the door and see that the refrigerator was full to bursting, but knowing that its contents were mostly not edible.

From time to time Mother would notice a particularly foul odor coming from inside. She would take out the most decayed items and discard them. The acrid smell would die down. The remaining contents would continue to sit. When she was able to buy groceries, the new food would be added to the old. I never trusted the new food. How could I be sure that I was choosing something safe to eat?

Avoidance. It was the only option. I stopped opening the door.

When she put them all back together it was sparking white inside. She typically did this in preparation for something important. She was making space for new things. Perhaps it was strawberry season, and we would soon be bringing in boxes of them fresh from the field. Maybe she was planning a holiday feast, and needed a place to thaw the turkey. Removing the clutter and waste, cleaning and making her refrigerator ready was a step in the process for her.

It was not a reactive chore, to remove something that had gone to spoil. It was proactive. Looking to the future. Preparing for something new and wonderful to arrive.

I never understood this practice as a child. But as an adult it makes perfect sense to me. If we had removed all of the waste, wiped away the spills and stains, and replaced the burned out light bulb our refrigerator would have been much more sanitary, yes. But, opening the door to find the refrigerator clean and empty would have been terrifying.

It was much easier to look at a refrigerator full of spoiled food than to have no food at all—this meant that we had something. It was proof that at some point there was money to buy food. It served as evidence that people had eaten in our house, and that we couldn’t possibly be hungry because there was plenty there.

And so it was in my broken marriage: I was desiring nourishment and finding only the decaying fragments of what once was. Knowing that our relationship no longer served its intended purpose, but feeling unable to leave. Afraid of what I might find if I stripped away what was left. Our home with him in it was somehow less terrifying than the thought of being alone. We would occasionally work together on this issue or that, temporarily suppressing the funk. In my heart I knew that I needed to wipe the slate clean and start fresh.

But, having him there, wearing that ring—no matter how stifling it was—meant that I had something.

It was evidence that I had once been loved.

Avoidance. Ain’t it a motherf*cker.

Day after day, year after year, looking anywhere but the place inside myself that needed my attention the most.

I now see that I couldn’t have ended our marriage in a reactive way. It had to be a proactive process. When I began to look to the future, I was able to let go. When I began to dream for myself—that is when the magic happened. The hope of new and better things to come gave me the courage to do what I thought I couldn’t do.

Not just new relationships, but new experiences, new ideas and choices, new freedom to live unencumbered by the restraint of someone else’s comfort zone. New ways to experience the fullness of who I am. Removing the things that no longer served me has created space for me to become the woman I was born to be. It has allowed me to reach a level of authenticity that I never could have attained otherwise. Every day, I believe that only wonderful things are to come…and they do.

Over and over, they do.

The most amazing thing is, I didn’t even realize that I was starving all those years. When we accept lack, scarcity, and emptiness as our normal, it becomes our touchstone. Certainly, somewhere in my heart I knew that there was more to life than I was living. But, opening the doors to that funky refrigerator, or taking an honest look at the convenient business partnership my marriage had become was just too painful.  It was easier to avoid the stark truths that were right in front of me. I accepted the lack, the feeling of less than, and yes—the utter and complete physical, emotional, and spiritual starvation, because in my heart of hearts, that’s what I thought I deserved.

When we begin to love ourselves, we can change our touchstones. There is no reason to keep avoiding the nasty old metaphoric refrigerator. When we open up that door, clear out all the junk, wipe down the shelves, and replace that burned out light bulb- we are preparing for something amazing.

Letting go of the old, yucky stuff that doesn’t feed us makes room for new, beautiful feast of possibilities.

We just have to be brave enough to ask—what am I starving for?