What Happened to the Boulder Co-op Market. 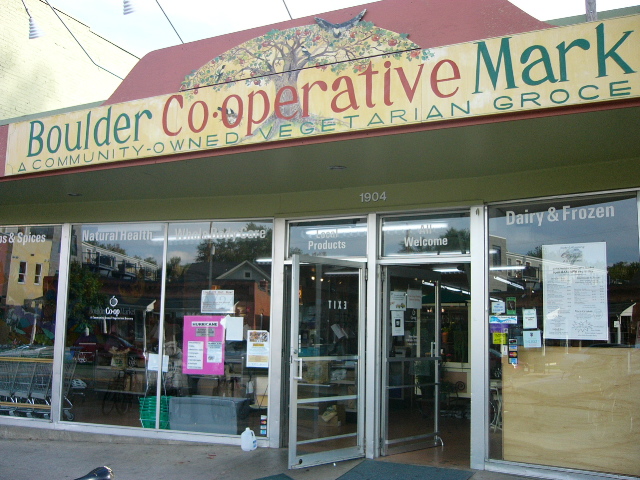 This article is dedicated to the remarkable members and staff of the Boulder Co-op Market.

At the turn of the millennium, in America’s health food capital of Boulder, Colorado, while not yet 30, and with no real business experience, I launched an effort to open a cooperative, vegetarian health-food store. In retrospect, I should have heeded the horoscope I found for myself in The Onion, America’s best satirical newspaper, in those first few weeks when we made the decision to open a storefront. To paraphrase, “This is a terrible time to start a business; for Christ’s sake, you know absolutely nothing about business.”

The idea was that the health food movement had grown out of the cooperative movement and that the fast disappearing food co-ops were integral to the health food movement’s social and environmental responsibility. These were, in turn, a major impetus to the conscious-consumer movement more generally. Without food co-ops, the high standards of this emerging industry might rapidly regress, dealing a major blow to conscious-consumerism. Amid the World Trade Organization protests in Seattle and the Nader 2000 campaign, the sense of mission was high.

Whereas public corporations are owned by their members on a one-share, one-vote basis, cooperatives are democratic. They are owned by their members, who each have an equal voice in how the organization is run. They combine the collective purpose of socialism with the market discipline of capitalism. And because of their participatory nature, cooperatives tend to inspire deep commitments and a strong sense of community. In smaller countries, with homogeneous populations, and a supportive regulatory framework, like Denmark and Sweden, cooperatives have at times accounted for well over a third of all retail sales. They are difficult to get started, but once built, their success rate is extremely high, because their members will go far to prevent them from dying.[1]

Having put together a board of experienced business people, who were each committed to the same cooperative ideals, leadership soon passed to a more qualified collective team. Over the course of three years we sold over five-thousand memberships and raised over a million dollars in member and small bank loans, eventually accumulating enough funds to open a storefront. Few, if any, American food co-ops had ever begun so large and with so many members. But compared with the most successful Whole Foods in the country, located just down the street, we were minuscule and underfunded. The lack of capital would later translate into a poorly paid, overworked staff, lacking the discipline of experienced management and established corporate practice.

Since there were no food cooperatives approaching the size of our own for at least five-hundred miles, and since the vast majority of the nation’s larger food co-ops had grown, with little competition, over the course of decades, from neighborhood food clubs, we needed to create a new business model. We had to grow rapidly, with little capital, while inspiring a high level of dedication, so that members would not defect to the better-stocked and slicker health food chains. This called for high levels of commitment, which were sustained through community building and high ethical standards. Most important to me, we were vegetarian. We were also GMO-free and sold only organic produce.

The Boulder Co-op followed the creation of the Chrysalis Cooperative, a residential community, which I co-founded and lived in for almost a decade. And the food co-op opened doors with a co-op community center and massage co-op. The idea was that surrounding the food co-op with other cooperatives would inspire commitment and make of the health food store a sort of mother-ship that might sustain the other co-ops.

The co-op lasted through five years of high staff turnover, under-stocked shelves, and desperate fundraising drives, culminating in a slow and drawn out death. It was beautiful while it lasted, exhibiting all of the warmth and idealism of a small group of thoughtful and committed citizens trying to change the world. The co-op provided a venue through which its community of members organized service projects and expressed their shared values. But like all-too-many idealistic endeavors, goodwill fractured under the cumulative stress of real-world constraints, overwork, infighting, and member-defection. The failure was variously blamed on undercapitalization, poor board planning, insufficient staff discipline, and weak member commitment. There were so many extraordinary people, who each gave their all to make it work, that it would be impossible to sum up their efforts and give adequate thanks here. But all-too-many of us, and not least myself, needed more time to find our footing.

Each of our weaknesses could have been overcome through greater cooperation, though. Members could have given more money; the board could have worked harder to find common ground; staff could have provided better service and mutual support; and the community could have been more tolerant as the board and staff better learned to run a storefront. Greater cooperation might have strengthened staff service and board volunteerism, decreased shopper defection and community infighting, and increased capital and fundraising drives. People who stand together in solidarity almost always fair better than those who stand alone.

The cooperative movement has grown steadily since its quiet beginning in Rochdale England in 1844. The movement has spread to virtually every industry, and it has pioneered multiple models of economic democracy. It is quite mainstream now, with the largest co-op in America being the U.S. Navy Credit Union. Whereas communism largely failed to produce either better societies or highly productive economies, cooperatives have often helped jump-start growth in troubled industries and economies, as the micro-lending movement has recently done in Bangladesh. But while the cooperative movement has grown steadily, it has not grown nearly so fast as corporations, whose more impersonal model of capitalization allows for much higher levels of capitalization.

The Boulder Co-op was largely ignored by Leftist activists, whose dedicated shopping alone would have saved the store. The cooperative model itself has also been largely ignored by the Left in favor of state socialism for over a century. The Left built the welfare but all-too-often overlooked the potential of economic democracy. It is time we envision a 21st century socialism that works. Focusing on cooperative would be a good place to begin.

This is an adapted excerpt from Convergence: The Globalization of Mind

If you liked, please friend me on Facebook and join the conversation.